There’s a new entry on the growing menu of tasty meat alternatives, brought to you by a pair of CU Boulder engineering alumni and a new, fast-growing source of protein.

Justin Whiteley (PhDMechEngr’16), co-founder and CTO of Emergy Foods, said he got the entrepreneurship itch as a PhD student in Professor Se-Hee Lee’s Electrochemical Energy Lab. 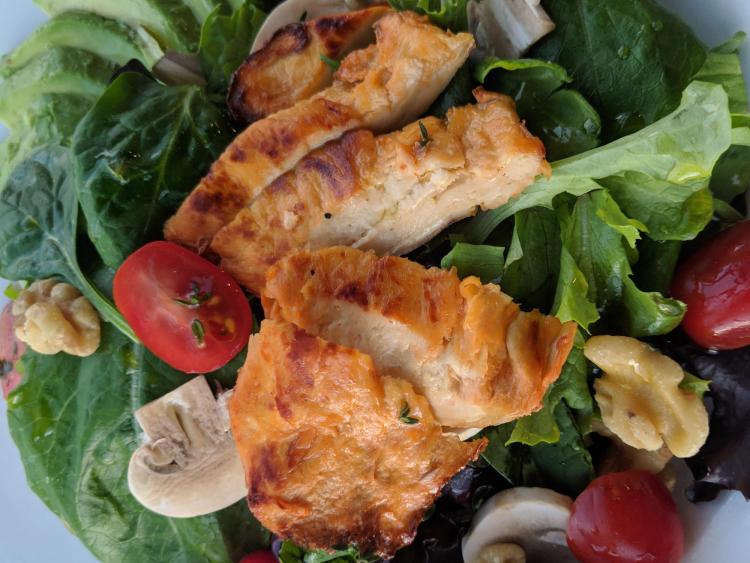 Emergy Foods protein (shown in the salad above) was developed by CU Boulder engineering alumni Justin Whiteley and Tyler Huggins (L to R in lead photo). Emergy Foods says it tastes and looks like meat and contains superior nutrition.

Now, he and CEO Tyler Huggins (PhDCivEngr’16) have closed on their first round of venture capital funding and have constructed a manufacturing facility just outside Boulder where they plan to produce their new source of protein. The protein, a fast-growing microorganism has the potential to decrease environmental tolls associated with raising meat or crops and could also be a promising source of nutrition in developing regions of the world.

Neither Huggins nor Whiteley initially planned to enter the food industry. But because they believed strongly in the technology they developed as graduate students at CU Boulder, they said they were determined to follow wherever it took them.

While in graduate school, Huggins and Whiteley used a microorganism to tackle another of the world’s pressing problems: the creation of an infinitely renewable battery. By feeding sugary wastewater from breweries to a microorganism known as filamentous fungi and baking it into a charcoal-like substance, they successfully fabricated complete electrodes compatible with existing battery designs. Although the new technique developed at CU Boulder worked successfully and produced batteries that were better for the environment, only a small industrial population was interested in swapping their current batteries. This caused Emergy to consider other opportunities.

Using the portion of filamentous fungi known as mycelium (similar to the roots of a mushroom), researchers and food scientists at the newly-formed Emergy Foods have engineered a series of sustainable, meat-like products.

“We intentionally selected our particular species of fungi because it’s one of the fastest-growing organisms on the planet,” said Whiteley. “Our strain grows 50% faster than that of competitors, doubling in quantity every two hours. This means Emergy Foods can essentially grow (the equivalent of) a chicken breast overnight with no waste and minimal manpower. A live chicken, on the other hand, takes 12 weeks to raise, requires food and water, impacts the environment and leaves behind waste such as feathers and a beak.”

Emergy Foods products, which mimic an array of meats like chicken breasts and cuts of steak, include all nine essential amino acids with nutrition superior to meat according to Emergy Foods. Because mycelium itself is tasteless, the end product is also seasoned to look, feel and taste much like meat from animals. Their recipes incorporate 90% mycelium and 10% vegetables and spices, adding a healthy dose of fiber for Americans who are generally fiber deficient.

“We’re realists here,” said Whiteley. “We don’t believe Emergy Foods is going to replace meat, but it is a great new source of protein that can supplement increasing demand.”

Unlike traditional meat proteins or plant-based proteins such as soy and pea, Emergy Foods products don’t require large amounts of land or water and won’t result in high emissions. Mycelium can be grown with minimal resources in brewing tanks. Additionally, because mycelium grows quickly and contains high levels of protein, Whiteley said he believes it could be a way to bring nutrition to less developed regions of the world.

Whiteley said he was always attracted to the applied side of engineering. After working in industry, he said he knew he didn’t ever want to have “just another job.” It was the desire to do something new and novel that led him to pursue a PhD at CU Boulder’s Department of Mechanical Engineering, he said.

“You are by no means put in a box. You just need to understand that you achieve your passion when you are open to learning new things,” said Whiteley. “You can get almost anything to work after four years in the lab, but beyond that lies a bigger challenge.”

As Emergy Foods prepares to launch products into local Colorado restaurants in early 2020, Whiteley said there is nothing more rewarding than watching the company grow – literally – before their very eyes.