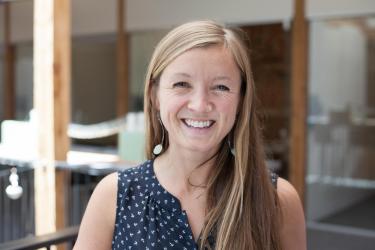 Avery is president and CEO of Bridges to Prosperity, a nonprofit that connects isolated communities to markets, hospitals and schools by building footbridges over impassable rivers. Avery first got involved with the organization as an undergraduate student at the University of Iowa. When she started her master’s degree at CU Boulder, she based her research on the viability of the bridge-building model, traveling with Engineers Without Borders to Rwanda and Afghanistan.

After she graduated from CU, Avery helped Bridges to Prosperity grow from a grassroots effort into a $5M/year operation. Over the past 17 years, the organization has built more than 250 footbridges and served nearly a million people around the world.

An active public speaker, Avery is also committed to inspiring young students to pursue careers in engineering. She has presented several TED talks on her work and starred in Dream Big: Engineering Our World, an IMAX film screened around the world. She has also helped establish dozens of university chapters of Bridges to Prosperity, including an active program at CU Boulder affiliated with the Mortenson Center.