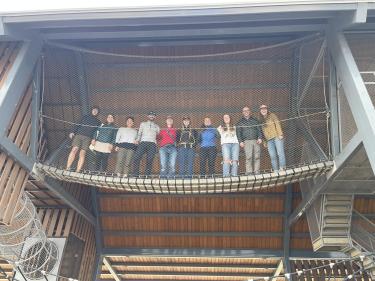 About an hour north of Boulder, along the Poudre River, lies the city of Fort Collins, CO (pop. ~ 165,600) on the ancestral homelands of Chyenne, Arapahoe, and Ute Nations. Fort Collins is home to Colorado State University. Its primary industries include manufacturing and tech, and the city is home to over 20 breweries. What really captures our attention though, is the city’s community and neighborhood parks.

On Friday, April 29th, Professor Natalie Ooi and MENV students from her Fall ‘21 term Community Economic Development course ventured into Ram territory to meet with the folks at Fort Collins’ Parks Planning and Development Department. The visit included a meeting with a number of the department’s landscape architects and civil engineers, including department director, Kurt Friesen, who had come down to Boulder last semester to give a guest lecture in Natalie’s class. We met with the Park Planning and Development team at their headquarters downtown and visited Poudre River Whitewater Park, Sugar Beet Park, and Twin Silo Community Park. Kurt and his team gave an overview of their current projects, showed us a sneak peak of their video demonstration for the new Bucking Horse Neighborhood Park, and discussed the challenges that they currently face as a department.

Throughout the visit, whether sitting in the Parks Planning and Development Department office, standing along the bank of the Poudre River, or strolling through Twin Silo Community Park, it was clear that the folks working on these parks care deeply about designing parks in a way that best serves the local community and provides space for people to build community. Their emphasis on place-based community building can be seen in the details of each park.

Bucking Horse Neighborhood Park is oriented in such a way that the activity terrace, which will include covered picnic areas, ping pong tables, and a bocce pit will be further away from houses so as to reduce noise levels for the neighbors. Most of Fort Collins’ newer parks have a playing-field space in the interior and are lined with native grasses and shrubs to reduce water usage. Parks are also designed intentionally to honor the culture of their local surroundings. 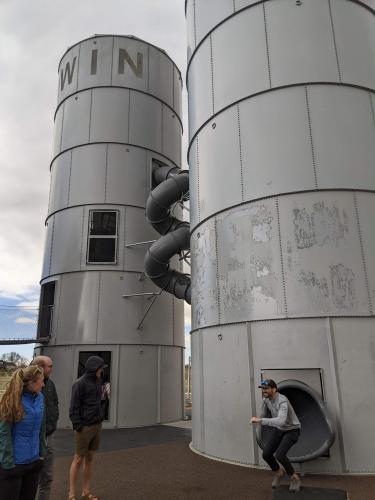 Twin Silo Community Park is designed to honor the agricultural heritage of southern Fort Collins: there’s a long entrance drive to the parking lot, a farmhouse-like picnic shelter, a back porch deck space for lounging, a community garden, orchard trees with fruit that can be picked, and two repurposed silos that now house a slide as part of the playground. Sugar Beet Park is designed to acknowledge the important role that Hispanic and Mexican workers had in Fort Collins’ sugar beet history which is honored by the sculpture, The Hand That Feeds, which was donated by Mujeres de Colores. The main play structure is shaped like a sugar beet designed by Earthworks, a Canadian-based play structure firm. Sugar Beet Park is also an endeavor to support its neighborhood community and keep families in the area.

The folks at Fort Collins Parks Planning and Development department care deeply about community building and the ecology of their city parks. It was inspiring to see local government at work helping folks build community through innovation and attention to detail. If you haven’t been to Fort Collins or to any of the city’s parks, Twin Silo Community Park should not be missed - it has something for everyone. A big thank you to Kurt and his team for spending time with us and showing us the incredible spaces they’ve created.