As part of their capstone project for the Master’s of the Environment program, three graduate students worked with local community to create a plan for the Mayhoffer Farm’s ongoing success

A team of three graduate students has collaborated with local governments to protect a working farm, allowing visitors to learn about its long history and importance as a natural and agricultural buffer between urban areas.

As their capstone project in 2021, Ethan Abner, Jena Van Gerwen and Cara Potter—all graduate students in the CU Masters of the Environment (MENV) program—chose to develop the Mayhoffer Farm Management Plan. Boulder County and the cities of Lafayette and Louisville worked with them to develop a plan that relied on ideas from local leaders and residents. 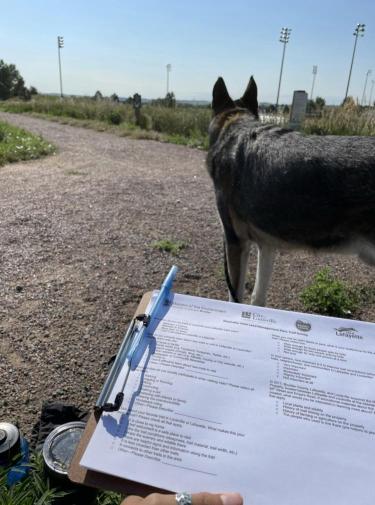 Considered a high-priority urban buffer separating Lafayette and Louisville, the farm was acquired in 2017 jointly by the two cities and Boulder County Parks and Open Space. The property has a diverse history of agriculture and coal mining.

“The histories of Lafyette, Louisville and Boulder show how agriculture and mining contributed to the cities’ growth,” Abner said. “We also thought that it was incredibly important to recognize that the land had been inhabited for thousands of years before any of us got here. We wanted to ensure that we captured that history in the management plan and story-map to  guide the managing agencies as they implemented the plan.”

The Mayhoffer Farm was deemed to have the potential to serve a variety of community needs, including:

The property also enhances access for traditionally marginalized and underrepresented communities. A crucial part of the project has been speaking with those communities, local leaders and other key interest groups, to incorporate their ideas.

As an example, the students worked with the Thorne Nature Experience, one of Colorado’s first environmental nonprofits, to host a focus-group dinner with members of the Latinx community to get their ideas about using open space. They held public surveys, completed stakeholder interviews, and conducted spatial data analysis.

Despite the graduate students’ recommendation to create a trail through the property to provide recreation opportunities for users, including people with disabilities,  Mayhoffer Farm is still a working farm, growing hay and providing pasture for cattle. The agricultural operations will continue.

The three students each brought individual interests to the project.

Abner worked at the U.S. Department of Defense in legislative affairs before entering the MENV program at CU Boulder. He worked on Capitol Hill as a military legislative assistant for his South Florida congressman. Before that, he served five years in the U.S. Marine Corps. Environmental policy was not on his radar until he had the opportunity to work with it.

“I thought it would be interesting to work within the community where I’m living to put the skills I had gained from that previous work to use,” Abner said. “Since I’m switching my focus to policymaking in environmental restoration and natural resource use, this land management plan seemed like a good project for my interests.”

In addition to the Mayhoffer Farm Management Plan, Abner has been working part time since graduating in December on a project with the U.S. Forest Service. 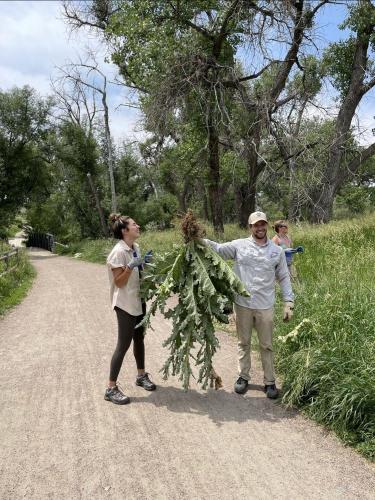 “The three of us had a lot of opportunities to try some things that were a little bit different with this” capstone project, he said. “Kudos to the communities for including a focus on marginalized and underrepresented communities. It will be exciting to see what will happen on the property over the next five to 10 years.”

Potter graduated from Oberlin College in Ohio with a degree in systems ecology, an interdisciplinary field that aims to holistically study ecology, and then began working with a horse trainer. It was a way to give herself a break before deciding on her next move.

“When I graduated from Oberlin, I pursued a lifelong passion outside of academics by spending a year apprenticing with my horse trainer, a crucial mentor along my journey,” Potter said. “The skills and abilities I developed during that time led me West as I was interested to learn more about working horses and ranching. I got a job on a ranch in Southern Colorado in the San Luis Valley. The land is owned by the Nature Conservancy and managed by a regenerative ranching company.”

While working there for a season, Potter met a woman who worked for the Natural Resources Conservation Service. She recommended that Potter look at masters’ programs to build upon the hands-on learning she was getting at the ranch. Academic work would deepen and contextualize the work Potter was doing, expanding her understanding of the wider sphere of conservation and sustainability.

“I liked that CU’s MENV program is a cutting-edge, interdisciplinary program with a focus on systems thinking,” Potter said. “That’s a cool way to understand today’s complex conservation and sustainability issues. I’m really interested in multi-use landscapes. The management plan was a cool project, and I learned a lot about local governments and stakeholder engagement.”

For Van Gerwen, the capstone was an opportunity to work with people in local government agencies on an open space project.

“I want to work in outdoor spaces and sustainability,” she said. “This project seemed like the best way to accomplish what my main goal was in grad school. All the work I’ve done in my undergrad, grad school and between schools has been oriented around environmental work and sustainability. Most of it was oriented toward the outdoors and open space. So this project was very much up my alley.”

Van Gerwen graduated from California Polytechnic State University with a major in environmental management and protection, with specializations in botany and geographic information system (GIS) mapping.

“There’s a lot of flexibility in the MENV program,” she said. “It helps you weave your own path. I think the program does a great job of networking students with professionals in the field. I’ve made a lot of connections through the program, and it’s set me up for getting the job I want.”