Beneath the Canopy – MENV Students Observe Conservation in Brazil 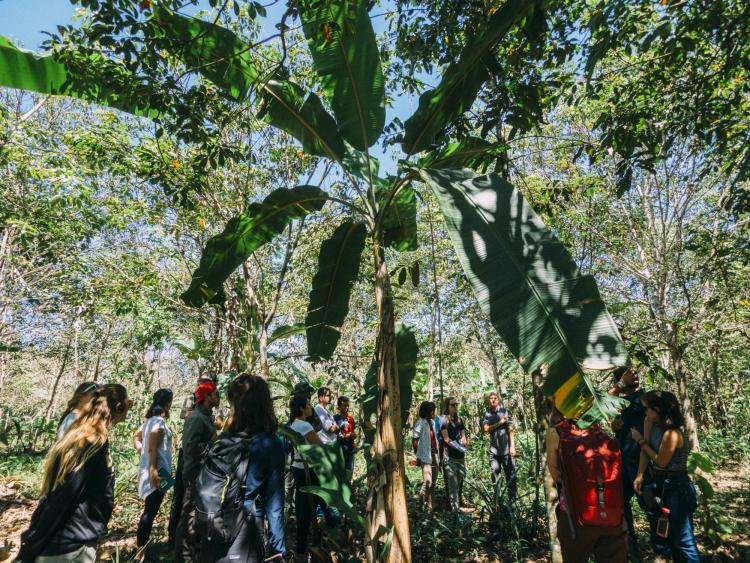 Five MENV classmates and I spent the last two weeks in Brazil for a class titled, “Sustainability in Brazil.”  The purpose of the course was to investigate socio-environmental development, governance, and leadership in the Amazon and Atlantic forests of Brazil.

Our two-week trip broke out into two parts: one week in the Amazon Rainforest in the state of Acre, and the other in the Atlantic Forest in the southern region of the state of Bahia. For context, the two locations are about as far apart as Washington D.C. and Las Vegas, NV with equally divergent socio-environmental contexts. 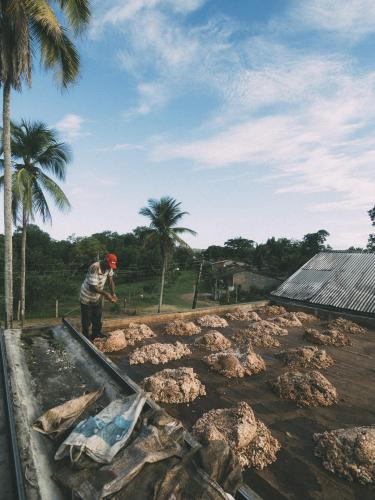 Despite their differences, Acre and Southern Bahia share awe-inspiring rainforest ecologies that are known worldwide for their biodiversity. In both cases, development pressures threaten the existence and function of local ecologies and the livelihoods of those who depend on the forest.

In Acre, we visited a state that is relatively sparsely populated where many residents depend directly on the land for their livelihoods. Most of the state is covered by primary Amazon forest (about 87%), but pressures are mounting to convert forests into grazing lands for cattle ranching — an activity that is intended to increase economic output per unit area.

Cattle husbandry serves as a source of assurance and economic stability for local people. We heard from residents that cattle function as a bank account for those who own them — their value grows over time and they can be sold off quickly in economically challenging times. Thus, many Brazilians perceive the conversion of forest to ranchlands as a desirable economic development pathway.

The value of the Amazon Rainforest is unquantifiable yet often difficult to access. The forest holds an incredible abundance in food, timber, medicine, and cultural value, not to mention a major stabilizing force for global carbon and water cycles. Forest-dependent economic development pathways offer a major opportunity to conserve the forest but must deliver sufficient economic value to provide comparable livelihoods to that of local ranchers.

While in Acre, we visited with individuals and organizations that are demonstrating strategies for dignified forest-based livelihoods. Throughout the week, we visited with forest extractivists (brazil nuts, rubber, timber), factory workers, indigenous leaders, and environmental educators. Through their work, these individuals and communities are proving the immense value of the forest and perpetuating its preservation.

Leaving behind the truly incredible Amazon Rainforest, we flew to Southern Bahia where we spent the last week of our trip. The region is densely populated with people living in and among primary Atlantic Forest, cabrucas (shade-grown cacao agroforests), and beautiful beaches. Southern Bahia has been recognized as one of the world’s top five biodiversity hotspots for its incredible diversity of vascular plants.

Forest clearing has been commonplace for several decades with recent estimates suggesting only about 16 to 25 percent of the land area remains covered by original forest. Cacao production constituted the main economic activity in Southern Bahia for about two centuries before a disease outbreak devastated cacao production. The recent decline in cacao production has left the region in immediate need of economic development. 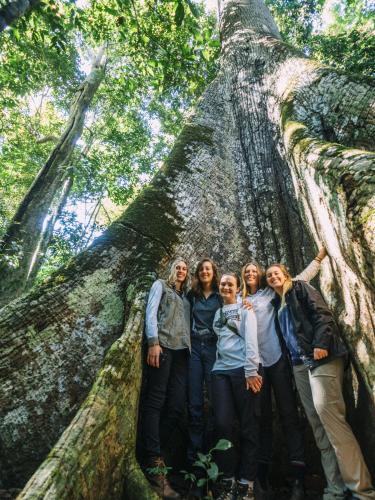 About a decade ago, a development project was proposed with the purported benefit of providing a much-needed boost to the economy of Southern Bahia. The project entails the construction of a deep-sea port to enable the international export of iron ore from inland Bahia. Major railroad construction will accompany the deep-sea port as a means for transporting iron ore across Bahia. All told, the deep-sea port and associated railroad construction project will likely produce a relatively small number of jobs for a limited period of time (predicted about 30 years) and cause a host of environmental damage to the Atlantic Forest, beaches and marine ecosystems.

Our class met with the individuals and organizations that are actively exploring sustainable development the produces long-term economic returns without degrading the surrounding environment. Over the course of the week, we met with agricultural producers (cacao, fruit), value-added processors (chocolate, furniture), a professional development organization, a community-based tourism organization and environmental organizations, each of whom are creating value to the local economy without collateral environmental damage. Currently, a collaborative effort is underway to reverse the decision to build a port and manifest a community-driven economic future that can provide for Southern Bahia for generations to come.

Throughout our time in Brazil, we observed the challenge of creating economic development that can support human communities without adversely impacting the surrounding environment. Both in Acre and Southern Bahia, development that prioritizes short-term economic gain threatens local environments with unique ecologies. Although the challenge is formidable, I feel inspired by the individuals that challenge prevalent socioeconomic pressures and are working to discover and develop truly sustainable pathways to economic development. Inspired by these individuals, I will even more fervently advocate for the adoption of agricultural systems that give back to the land as much as they take, allowing future generations to inherit more fertile soils and cleaner water than their parents received.