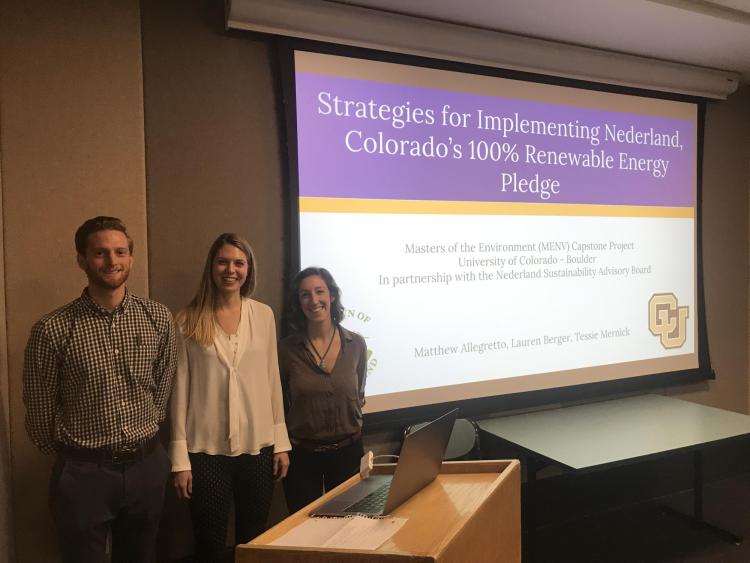 In August 2017 the Town of Nederland, Colorado passed a resolution pledging to derive 100 percent of its electricity from renewable energy sources, making it fourth Colorado municipality to do so behind Boulder, Pueblo, and Aspen. Nederland’s resolution to achieve “100 percent renewables” is indicative of a growing movement among municipalities across the United States.

In 2015 only five communities nationwide had pledged to make such a transition, but by November 2018 that number grew to 93 cities and even more counties and states. Over the course of recent years, many organizations, including the Sierra Club, have been vocal in their support for 100 percent renewable energy pledges like this. However, there is no established model for communities that have made this commitment to execute it.

With a goal of transitioning to renewables by 2025, Nederland’s Board of Trustees and Sustainability Advisory Board tapped three MENV graduate students to provide guidance on how to achieve this ambitious goal.

By calculating Nederland’s community-wide electricity consumption – including municipal, residential, and commercial sources – at roughly 12 million kilowatt-hours in 2017, the team established a benchmark against which progress towards 100 percent renewable electricity should be measured. To achieve 100 percent renewable electricity, Nederland will need to identify the equivalent of 12 million kilowatt-hours in Renewable Energy Credits (RECs). For a REC to be counted towards Nederland’s progress, it must be retired on behalf of an electricity consumer within the community or generated within the community and not sold or traded away.

Energy efficiency upgrades factor into this methodology by decreasing the total consumption benchmark that RECs are measured against, thereby reducing the need to account for more RECs. For example, if energy efficiency measures decrease the town’s consumption by one million kWh, the town would then need to account for the equivalent 11 million kWh in RECs.

In their analysis, the Capstone team found that in order to achieve progress towards the 100 percent goal, Nederland residents, businesses, and the municipality would need to voluntarily act to increase the renewable content of their electricity consumption. Actions that community members could take include collaborating with partners to decrease legislative and regulatory barriers to achieving 100 percent renewable electricity; participating in renewable electricity programs; and leveraging rebates, grants, and incentives for technology upgrades and installations.

From this analysis, the team constructed two scenarios of the future:

In early December, Xcel Energy announced that it will achieve 100% carbon-free electricity by 2050. While it is too early to say what specific impact this announcement will have on Nederland’s goal, the students believe that Nederland will continue to pursue its own 2025 goal.

The possibility of 100 percent renewable electricity

Based on the framework described above, the students found that Nederland can, in fact, achieve its goal of consuming 100 percent renewable electricity by 2025.

The team found that to achieve its 100 percent renewables goal, Nederland will require full community-wide support, including extensive efforts on the part of residents, businesses, and the municipality. The final analysis includes recommendations of 14 actions for the community to pursue and suggested levels of participation for each action that would result in meaningful progress towards the town’s goal.

To achieve the transition to 100 percent renewable sourcing, residents and businesses will need to commit time, and money. For these actions, the municipality must provide education, marketing, and support to ensure that the suggested levels of participation are reached.

The MENV Capstone team’s findings were met with overwhelming praise from the Town of Nederland. Jennifer Morse, INSTAAR climate technician, Nederland Sustainability Advisory Board Member, and the team’s external project advisor, characterized the experience as, “wonderful from start to finish,” and said that the students “listened to [the town’s] needs and concerns, and created a well-researched, highly-readable and usable plan that we are excited to implement.”

“Addressing climate change is the number one issue for this century. Nederland is incredibly fortunate to have CU MENV program as a partner and resource as we tackle the complex issues we face in moving to 100 percent renewable energy on our electrical grid. The Capstone Project completed by the MENV students this year is the cornerstone on which our implementation will be built and the reason I'm confident we'll meet our goals.”

The Capstone team had the opportunity to present their findings at the 9th Annual Energy Policy Research Conference in Boise, Idaho in September 2018, where they received an award for their work on behalf of the Energy Policy Institute.

The MENV team’s methodology marks a significant step towards helping Nederland – as well as other communities throughout the county – take action on climate change.