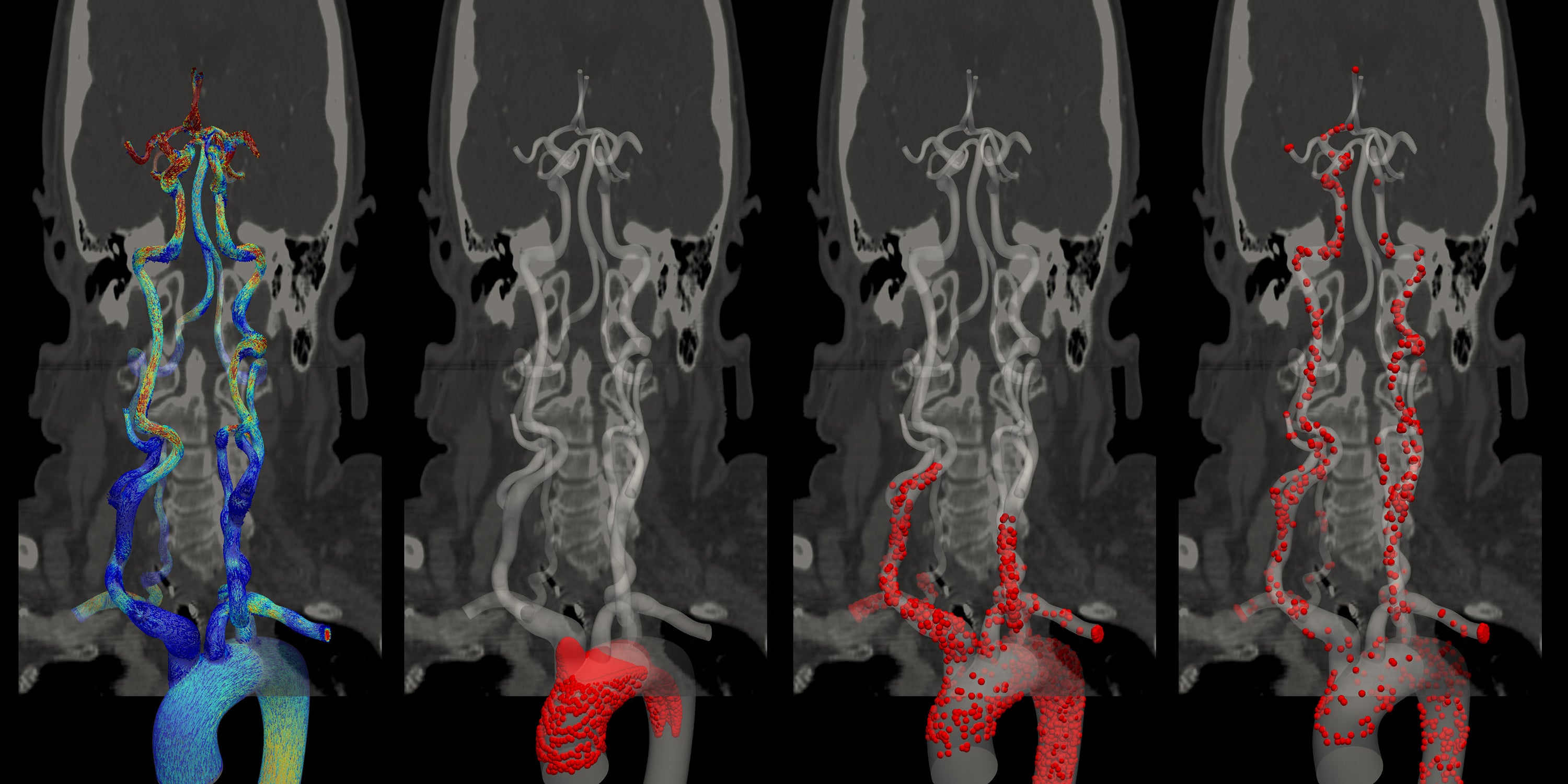 Stroke is one of the leading causes of death and disability worldwide, killing 5.7 million people each year. However, with diagnostic technologies being developed by Assistant Professor Debanjan Mukherjee of the Paul M. Rady Department of Mechanical Engineering, engineers and clinicians are hopeful some strokes will soon be prevented. 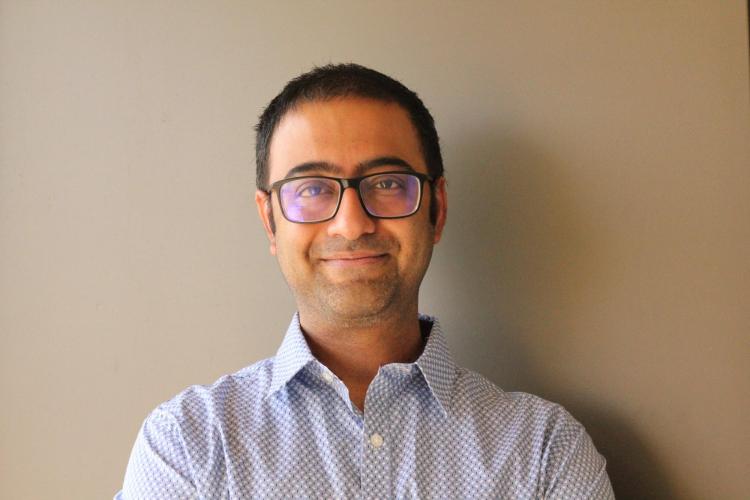 Above: Assistant Professor Debanjan Mukherjee.
Top: Blood flow through the arteries and into the Circle of Willis in the brain (right). Successive snapshots of modeled embolic fragments traveling to the brain and leading to stroke (left three images).

Mukherjee and his collaborators, Drs. Jonathan Coutinho and Valeria Guglielmi of Amsterdam University Medical Centers and Dr. Michelle Leppert of CU Anschutz Medical Campus, have received a $584,000 NIBIB Trailblazer Award from the National Institutes of Health to use over the next three years. These funds will enable them to fine-tune patient-specific computational models that will determine how emboli formed at certain locations can lead to a stroke at a specific region in the brain.

Embolic stroke is caused when a blood clot or piece of biological debris, known as an embolus, becomes loose in the bloodstream and creates a blockage that stops blood supply to a specific region of the brain. When the brain tissue does not receive blood over a period of time, the tissue becomes damaged and may die.

“Our strategy for treating these patients currently hinges on our ability to pinpoint the most likely source of the embolus and treat the underlying cause,” said Leppert. “This is why we are excited about this project: because it may offer tools in the future that helps us to objectively pinpoint where an embolus-causing stroke originates.”

The key to figuring out where the embolus originates is understanding how an embolus could be transported from various locations in the heart-brain arterial network to the brain, especially when multiple cardiac or arterial sources may exist. To do so, researchers at Mukherjee's group at CU Boulder will be using a patient-specific computational model known as in-silico embolus source-destination likelihood (SoDeL) mapping. This method is non-invasive and does not require additional imaging costs for the patient.

Coutinho and Guglielmi will begin by gathering a comprehensive clinical and imaging dataset, including the CT scans of the complete heart-brain arterial network of hundreds of stroke patients from Amsterdam UMC.

“We are imaging the heart, aortic arch, cervical and intracerebral arteries in a ‘one-stop-shop’ protocol directly in the emergency room, right after the stroke has occurred,” said Guglielmi.

Each CT scan will then be converted into a three-dimensional computational model and paired with a simulation developed by Mukherjee’s group, mimicking how blood flows from the patient’s heart to their brain. With the simulation in place, Mukherjee and his group will run thousands of what-if scenarios for each patient, releasing thousands of virtual emboli and tracking which source locations are most likely to cause a stroke where one has occurred.

“This method lets us go from the source to the destination millions of times,” said Mukherjee. “When we play out every possible what-if scenario, we get a stroke risk indication that, when paired with clinical data, can determine exactly where the stroke originated.”

“I’ve always found it fascinating that many of the same principles you learn in the context of a machine, engine or pump are also governing very vital physical processes,” said Mukherjee. “The biggest difference between fluids flowing through a tube and the human body is that our arteries will never be straight. This causes the emboli to travel with a lot of swirling.”

Leppert said collaborations like this are integral to innovation.

“Too often clinicians and scientists work in parallel, not in tangent, so that progress is only theoretical but never realized,” Leppert said. “We often underestimate the impact we can have on one another and the ultimate impact collaborations such as this can make on patient outcomes.”

Mukherjee said it’s not every day he ends up being able to make such an advancement with international collaborators that will be able to address more than one challenge in the medical field with longstanding consequences on human life. His group is one of the first to be able to model fluid flow for the entire heart-brain arterial pathway, research that is paving the way for stroke prevention around the world.