Professor John W. Daily is soon to retire from the Department of Mechanical Engineering after an over 30-year career serving the CU Boulder community.

On Dec. 6, Daily presented a talk based on the famous “Last Lecture” given by Randy Pausch, a computer science professor at Carnegie Mellon who died from pancreatic cancer less than a year later. A senior academic who gives a “Last Lecture” today is encouraged to think deeply about what matters to them and consider what wisdom they might impart to the world if it was their last chance to do so.

In his talk, Daily addressed not only his gratitude for his career as a professor but also shared personal words of wisdom about the importance of caring for one’s mind, body, spirit and relationships. He also emphasized the importance of helping and loving others willingly, saying love is not a conserved quantity. 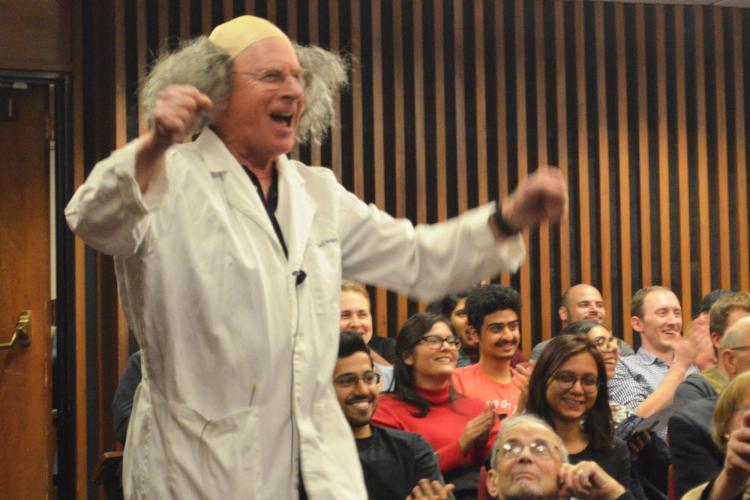 During his last lecture, Professor John Daily dressed up as Dr. Entropy, a character known to make an occasional appearance in his classroom.

Daily made another point – perhaps indirectly – about the value of mixing things up and making people laugh. Over the course of his talk, Daily managed to drive a remote-controlled car, hit a golf ball across the room, put on a Hawaiian shirt and dress up as a mad scientist known as Dr. Entropy, an act he said he put on for his students from time to time.

Almost 200 guests were present for Daily’s presentation with more coming and going throughout the ceremony in the evening. Guests included colleagues from across departments and colleges, some of Daily’s first students, current students and friends and family, including seven of Daily’s eleven grandchildren.

One guest in attendance was mechanical engineering Associate Professor Ginger Ferguson who was also a student of Daily’s.

“John has given me the opportunity to learn how to teach and mentor others,” said Ferguson. “I thank John from the bottom of my heart for fostering my curiosity and for teaching me being hard-working and persistent would form the basis for my current career in teaching and research.”

Ferguson was not the only one with this sentiment. Other past students and colleagues sent videos sharing thanks with Daily. Mel Branch, mechanical engineering professor emeritus; Mike Hannigan, current department chair; JoAnn Silverstein, associate dean for faculty advancement; Jana Milford, current mechanical engineering professor and past department chair; Bob Ferry, Boulder Faculty Assembly chair; and Bob Pitz, Daily’s first graduate student were invited to share their thanks as part of the ceremony.

All those gathered for Daily’s last lecture shared excitement for his next chapter of life. Throughout the evening, he was wished a fun, people- and golf-filled retirement with plenty of visits back to CU Boulder. 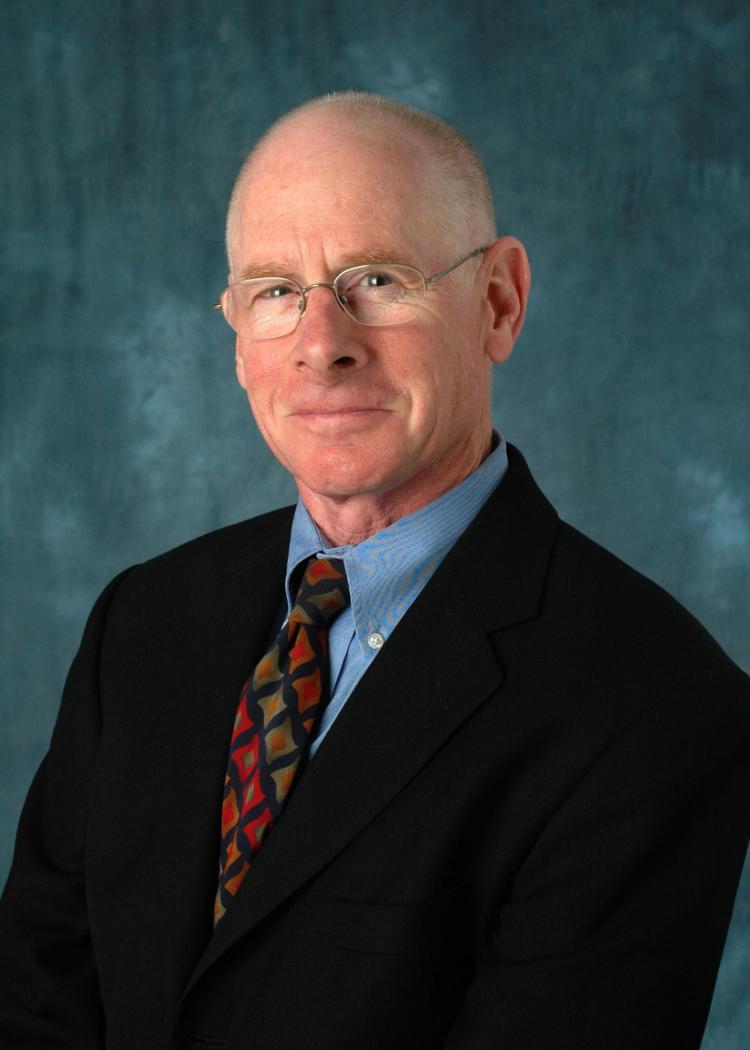 Daily studied mechanical engineering at the University of Michigan, receiving his BS in 1968 and MS in 1969. He then worked as a heat transfer analyst at Aerojet Liquid Rocket Company. After receiving his PhD from Stanford University in 1975, Daily worked as a faculty member at the University of California Berkeley until 1988. From 1988 until 1990 he was Director of the Center for Combustion Research at CU Boulder where he also served as chair of the Department of Mechanical Engineering from 1990 to 1995 and interim chair from 1999 to 2000.

Most of Daily’s academic career has been devoted to the field of energy, focusing on combustion and environmental studies. He has worked on combustion and heat transfer aspects of propulsion and power generation devices, studying topics such as fluid mechanics of mixing, chemical kinetics, combustion stability and air pollution. He also worked on the development of advanced diagnostic instrumentation for studying reacting flows and environmental monitoring.

More recently, Daily has been working in the areas of biomass thermochemical processing and source characterization, wildfire behavior, the environmental consequences of combustion, optical biopsy and micro-electromechanical systems applications in combustion and instrumentation. Daily is a founder of Precision Biopsy Inc., a startup company developing technology for the optical detection of prostate cancer, has over two-hundred scientific and technical journal and conference publications and has also consulted in areas of energy systems, engine combustion, product safety, accident reconstruction, fire safety, toxic air contamination and air quality.

Daily is an honorary member of Pi Tau Sigma, Sigma Xi, The Combustion Institute and a fellow of The American Institute of Aeronautics and Astronautics (AIAA). He was a 1987 recipient of the Society of Automotive Engineers' Ralph A. Teetor Award for Engineering Educators. For ten years, he was a member of the San Francisco Bay Area Air Quality Management District Advisory Council and was Chair from 1985 to 1986. Daily has chaired both the AIAA Propellants and Combustion Technical Committee and the Professional Member Education Committee. He was also the chair of the AIAA Publications Committee, responsible for all AIAA journal and book publications. Daily has served on and chaired the State of Colorado Hazardous Waste Commission for over ten years and was on the State of Colorado Air Quality Control Commission.