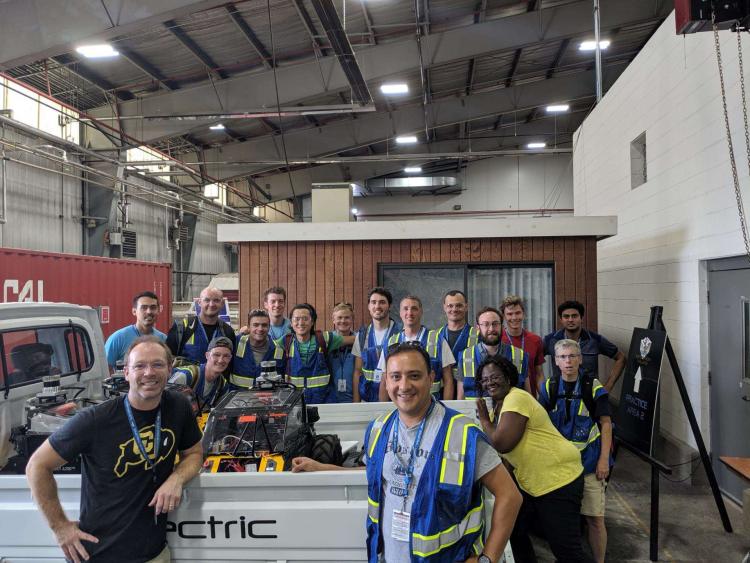 The CU Boulder MARBLE team gathers around their underground drone at the Tunnel Circuit Event at NIOSH Coal Mine in Pennsylvania, the first of three challenges led by DARPA.

On August 9, Professor Sean Humbert and collaborators spent the day doing final testing on their underground drone at Colorado School of Mines Edgar Experimental Mine before heading to Pittsburgh, PA for the first of three increasingly difficult underground search and rescue challenges. In fall 2018, Humbert and his team received a $4.5 million Defense Advanced Research Projects Agency (DARPA) grant to design drones that can search tunnels, mines and caves for disaster survivors, chemical leaks and more.

This week, Humbert's team known as MARBLE and 11 other teams are engaging in the first of three DARPA subterranean challenges. They will be sending drones on a mock search and rescue operation down miles of NIOSH Coal Mine steam tunnels in Pittsburgh, part of the Tunnel Circuit Event. The goal is to autonomously navigate and map these unknown spaces; correctly identify DARPA-specified artifacts which include backpacks, fire extinguishers, and other relevant items; and report artifact positions and three-dimensional maps to DARPA during each deployment.

"It's a significant challenge due to austere conditions such as mud, rocky terrain and low light, lack of GPS and poor device communications," said Humbert. "We are excited to be in second place out of 11 teams after the first two days of deployments."

The competition will continue through the week and will be livestreamed by DARPA.

After the close of the Tunnel Circuit Event, the teams have two more subterranean challenges to go before they are finished. In six months, they will graduate to larger tunnels, such as those that make up the New York subway system. As their final challenge, they will navigate natural caves which add hazards, including mud, rocks and potential cave-ins. The DARPA Subterranean Challenge is set to end in fall 2021.