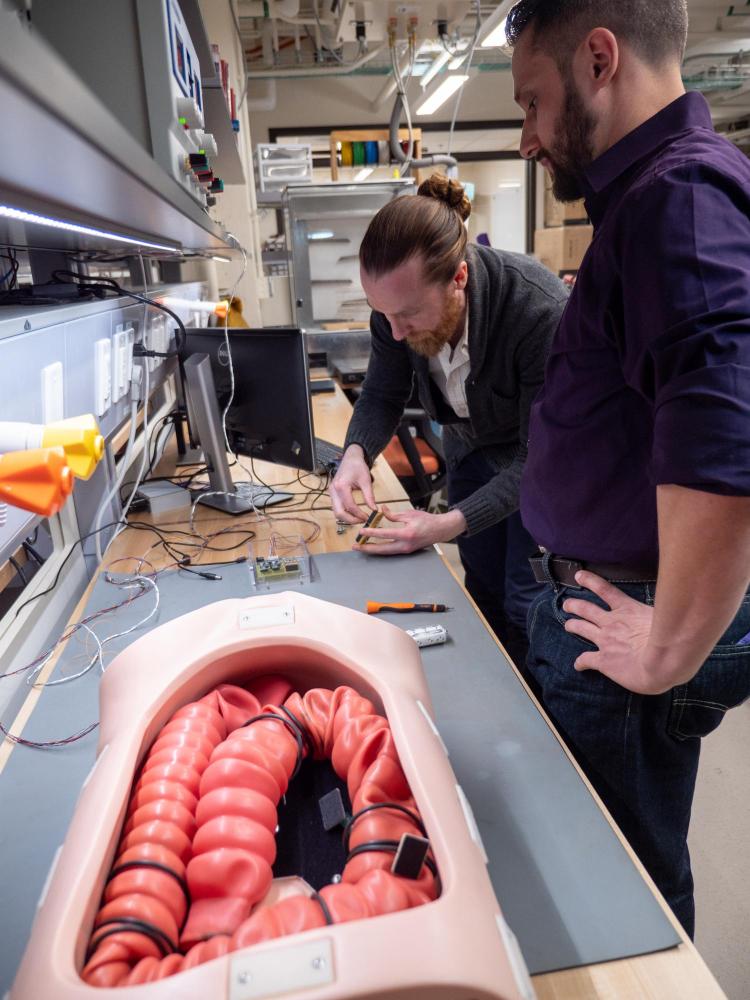 Navigation is no easy task for any self-driving device, but with a robot making its way through the colon, Prendergast has tackled challenges with persistence, a healthy dose of skepticism and commitment to success. In July 2018, Prendergast’s paper, “Autonomous Localization, Navigation and Haustral Fold Detection for Robotic Endoscopy,” was accepted to the International Conference on Intelligent Robots.

Thanks to his father, a skilled cabinet maker, and mother, a kindergarten teacher, Prendergast grew up in an environment where building, creating and learning were encouraged. Prendergast spent his high school years in North Carolina, where he attended University of North Carolina at Chapel Hill. Due to the cost of college, he hadn’t originally planned on furthering his education in this way, but when offered a full-ride scholarship, he gladly accepted. For four years, Prendergast fenced as a student-athlete and earned a bachelor’s degree in philosophy. He enjoyed thinking about problems as they related to social and political ethics.

“I never considered myself to be a math person, but there is a structure to the thought process that connects philosophy and math,” Prendergast said. “I like bending the rules and finding ways around things.”

Following his first degree, Prendergast tutored students taking the SAT and GRE and found himself reading research articles in his spare time.

“The more reading I did, the more I realized there may be a way for me to make a contribution to the world,” he said. This notion, along with a renewed interest in the hands-on skills he had developed as a child, led him to pursue a second undergraduate degree in mechatronic engineering.

“Sure, my friends thought I was crazy, but I did it anyway,” Prendergast said.

When Prendergast came across Associate Professor Mark Rentschler’s research, he was enthralled.

“What they were trying to do seemed impossible to me, and I was skeptical,” he said. “That alone garnered my interest.”

After meeting with the group for the first time, he couldn’t stop thinking about how he might address endoscopy challenges.

Though he admits he still doesn’t have all the answers, Prendergast has witnessed great progress during his six years with the lab.

“Seeing the device drive on tissue with a high level of maneuverability was very exciting. We are just scratching the surface of this device’s capabilities,” Prendergast said.

Prendergast said he appreciates what his teammates have taught him, sharing that the group members have done an exceptional job of pushing each other through the more challenging times.

In the six years Prendergast has been a student at CU Boulder, he has witnessed the robotics and systems design program at CU Boulder grow tremendously. He has seen the addition of faculty, foundational coursework and a more direct pipeline through the program.

Prendergast graduated recently with his PhD in Spring 2019. Though not yet sure what’s next, Prendergast intends to put his efforts toward creating devices with significant positive impact.