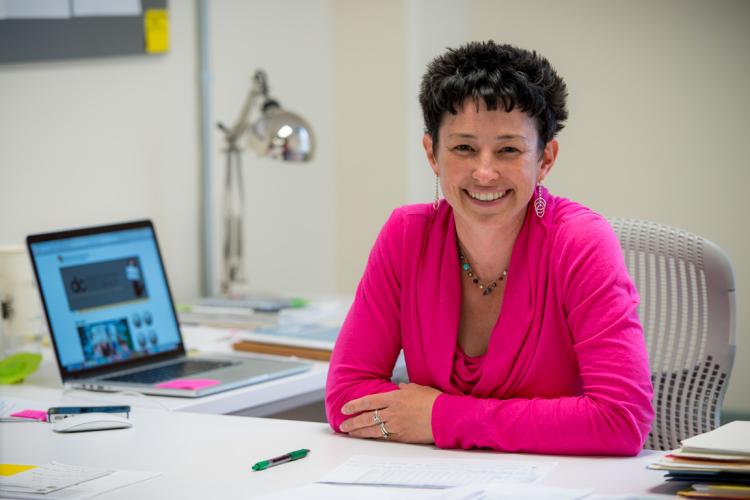 What makes a good engineer? A strong drive to excel, an interest in pushing the limits of technology, and inquisitiveness about how the world works. Another critical component: a good education from people like Daria Kotys-Schwartz.

She has many duties in the college–instructor, director of the Idea Forge, co-director of Design Center Colorado–and she approaches them all with a passion for education and drive to give students the real-world experiences they will need to be successful.

As the co-leader of senior design, she gets to know every mechanical engineering undergraduate. It is her goal to ensure that by the end of the academic year, each senior has made the transition from student to practical engineer.

"It's why we emulate a small industry space. We do performance reports. We have removed academic language and have a company handbook. The students do the ordering of parts for their project. A lot of university students never see the economics of what they're doing," Kotys-Schwartz says. "We have one of only 10 senior design programs in the country set up like this.”

Her efforts have won praise from students, businesses, and alumni, including John Mollenkopf (BS '83).

“Daria inspires people to give their best. The enthusiasm she shows for her work is contagious, not just to the students, but also to alumni," Mollenkopf says.

His accolades are more than just words. Mollenkopf and fellow mechanical engineering alumnus Bob Wills (BS 69’) teamed up to create a Design Excellence Fellowship in the Department of Mechanical Engineering to recognize Kotys-Schwartz and provide additional funding for her initiatives.

“Daria has brought so much to the mechanical engineering department and continues to give every day. She’s a true inspiration to those around her,” Wills says.

Kotys-Schwartz, who is rarely at a loss for words, considers the award a distinguishing moment in her career.

"It's one of the first times I've been stunned into silence," she says. "I got into this to make engineering education better than what I had, and this award is symbolic that what everyone in the Idea Forge is doing is on the right track."

So what does the fellowship mean going forward? In addition to the recognition, Kotys-Schwartz will receive $13,000 annually to buy equipment, create programs, or host unique events.

"I would like to do workshops where we partner with outside companies. We have done them occasionally in the past. We had one where a company spent a day working with students on strain gages. They can build professional skills they would not be able to get in a classroom," Kotys-Schwartz says.

Her efforts build connections that go beyond the classroom experience and past graduation. She has helped students through the process of finding jobs and even negotiating salary and benefits.

“This program is not about students being successful in senior design. It is about making sure they are successful after they graduate,” she says. “I hear back from students two, five, ten years later. That is what this job is really about.”