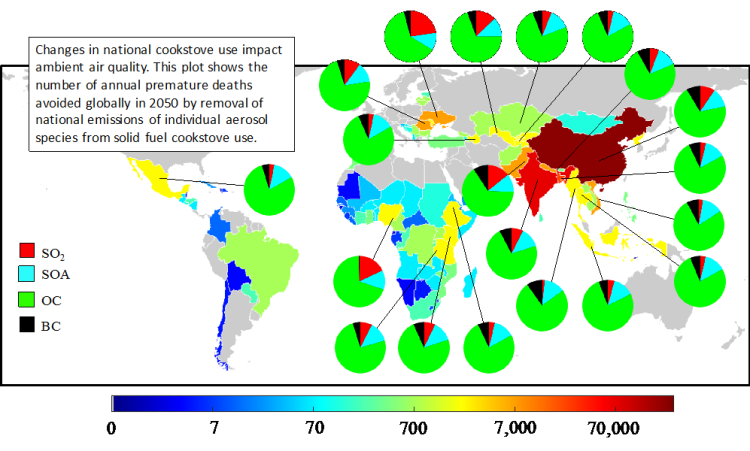 New air quality research is investigating a major, but often overlooked contributor to outdoor pollution and climate: burning of solid fuel for cooking and heating.

Cookstove studies typically evaluate how they contribute to indoor air quality issues in houses where solid fuel is frequently used for cooking and heating. A new paper from the University of Colorado Boulder appearing in the Proceedings of the National Academy of Sciences, has taken a different approach, going outside the home and evaluating how cookstoves impact ambient air pollution and climate.

While a single cookstove only produces a small amount of emissions, millions are used daily around the world, and that pollution adds up. It is estimated that every year between 370,00 – 500,000 people die prematurely from exposure to fine particulate matter associated with residential cookstoves in outdoor air.

The heaviest cookstove use is in Southeast Asia and throughout Africa, and environmental groups making better cookstoves want to know where they can invest resources to have the biggest positive impact. Targeting countries with the highest usage may seem like an obvious choice, but this strategy turns out to often not yield the largest impact per cookstove.

If the soot and fine particulate matter from areas with significant numbers of cookstoves is swept out over the ocean by prevailing winds, reductions in use will have a much smaller impact than in places where the emissions blow into populated areas or are taken north to the Artic, where black soot can enhance melting of snow and ice and contribute to global climate change.

Using advanced supercomputers, CU Boulder researchers and collaborators at Dalhousie University in Halifax, Nova Scotia, were able to map out pollution flow patterns world-wide and determine how cookstove emissions in one country can cause problems hundreds of miles away.

“Other studies have looked at how cookstove use globally contributes to pollution. No one has done this before picking out individual countries,” says lead author Forrest Lacey, who earned his PhD in mechanical engineering from CU Boulder in June.

The computer simulations examined the simultaneous impacts of solid fuel emissions on outdoor pollution and climate change, considering both particulate matter and greenhouse gases. The study used measurements of pollution worldwide from remote sensing instruments aboard NASA satellites, which collect data over both population centers and isolated regions where information is otherwise scarce.

Reductions in cookstove use in China and India would have the largest positive impact to global climate change, according to the data. As major users of residential cookstoves, this is to be expected. More surprisingly, the investigation reveals the biggest climate and ambient air quality benefits per cookstove would come from less targeted countries – Azerbaijan, Ukraine, and Kazakhstan.

Daven Henze, associate professor of mechanical engineering at CU Boulder, points out some of the broader value of studies that highlight connections between air pollution problems and climate change, “The immediate local air quality benefits can be quite motivating, in terms of domestic environmental policy; meanwhile, the potential to mitigate climate change at the same time is an added bonus. Working on climate problems, which are global in scale and take decades to yield tangible results, can otherwise be discouragingly abstract for policy makers.”

The research was supported by the NASA Health and Air Quality Applied Sciences Team and funding from the U.S. Environmental Protection Agency, although it has not been subjected to any EPA review and therefore does not necessarily reflect the views of the Agency, and no official endorsement should be inferred.