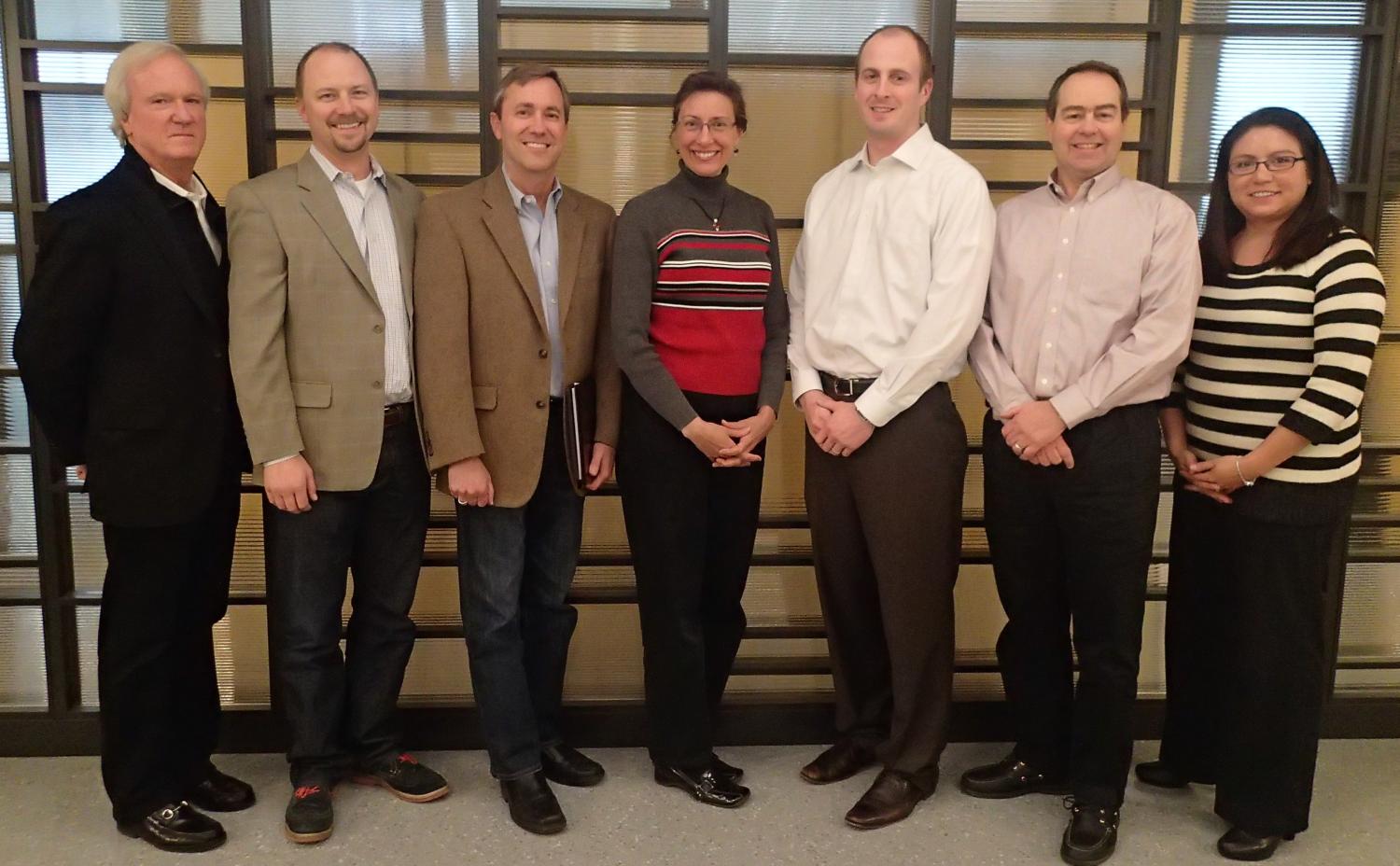 CU-Boulder's Department of Chemical and Biological Engineering (ChBE) has experienced a growth of student enrollment of approximately 75 percent since 2007, making it one of the top 10 largest chemical engineering departments in the nation on the basis of student enrollment. This growth brings exciting opportunities, but also significant challenges.

With another 50 percent growth in student enrollment expected by 2020, the department has enlisted the help of an External Advisory Board (EAB) to form a ChBE community that links alumni, current students, faculty, and staff for the mutual benefit of all.

The EAB is currently comprised of ChBE alumni from both the undergraduate and graduate programs who are now in leadership positions in companies spanning energy to pharmaceuticals. EAB members (pictured l-r) T. Scott Martin, Joe Poshusta, Bart Carpenter, Theresa Scholz, Chris Perkins, John Blakney III, and Dana Settell have generously contributed their time, unique skills, and perspectives to a variety of collaborative pursuits with ChBE faculty and staff.

During its 2013 meetings, the EAB critically considered the challenges faced by the ChBE department and concluded that the strong and active CU-ChBE community represented an incredibly powerful but largely untapped opportunity for students, alumni, faculty, and staff. Working together, the EAB and ChBE faculty developed an overall vision and plan to connect these constituents in a continuing partnership to support both the professional success of students and the long-term improvement of the ChBE department.

>> Read about our student mentoring and 1904 Society initiatives 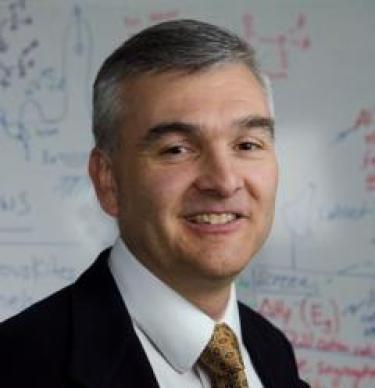 Biking down a steep mountain road on his way to work last August, ChBE Professor and Associate Chair Charles Musgrave collided with a truck on a sharp bend, breaking his neck, collarbone, and four ribs. The fact that he showed up to teach on the first day of classes three days after surgery surprised neither his colleagues nor his students.

"I was excited to get back to teaching and research," he admits.

Musgrave is passionate about his work, in particular using quantum mechanics for renewable energy applications.

"I have always been fascinated by quantum mechanics," he says. "It is one of the greatest scientific achievements of the 20th century and can be an incredibly valuable tool in uncovering detailed underlying molecular processes."

Trained as a materials scientist, Musgrave has a strong background in chemistry and physics, which allows him to approach renewable energy challenges from a unique perspective. 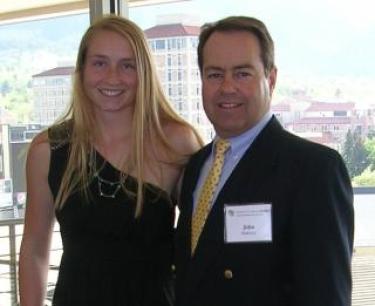 Where Are They Now? The Blakney Family

When the late John Blakney Jr. enrolled in CU-Boulder's ChBE Department in 1950, he started a family tradition.

Both John III and Susan were encouraged by their father to come to CU.

"Dad loved it and it was a way for me to go where the skiing was better than New Jersey!" says John III. "Also, the fact that CU balances a very high quality education with so many fun outdoor activities really sets it apart. I have great memories of walking across campus on a sunny day after a snowstorm, concerts in Macky and Folsom, and eating at The Sink, formerly Herbie's, during my dad's visits." 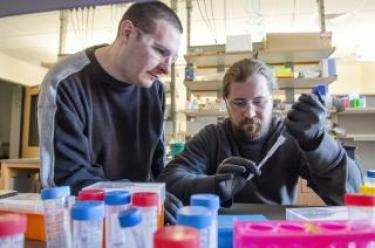 The CU-Boulder iGEM team had a goal of making synthetic biology more accessible and affordable. Surpassing their hopes, their project on new low-cost methods of enzyme purification won multiple honors at the iGEM North American Regional Competition in Toronto and qualified them for the top synthetic biology competition in the world.

iGEM, or Internationally Genetically Engineered Machine, is an international competition launched in 2003 wherein student teams are given a kit of biological parts such as promoters or specific genes. Using these parts as well as those of their own design, teams must create biological systems that operate in living cells.

"iGEM encourages high-risk, high-reward projects; documenting all of your results regardless of success; and freely sharing information," says ChBE student Phil Jensen. "This is a good template for how science ought to be investigated."

"As the project progressed, we realized that the existing protocols and documentation could be vastly improved," says Heymann. "By the end we created restriction enzymes, protein purification systems, miniprep kits, and many new protocols."

Let us know what you've been up to! Send us an alumni update using our online form.

Curt Hampton (MS ChemEngr'96) became the Senior Business Systems Manager in the Clinical Trials Office at the Huntsman Cancer Institute, an NCI-designated Cancer Center, in Salt Lake City this past fall. He implements, manages, and trains the software applications that track the clinical trial data in an effort to find cures for cancers.

Kyle Lampe (PhD ChemEngr'09) began his new position in January at the University of Virginia as an assistant professor in chemical engineering. After earning his PhD at CU-Boulder with Melissa Mahoney, he worked as a postdoc at Stanford University in the Department of Materials Science and Engineering with Sarah Heilshorn, where he engineered protein biomaterials for neural tissue engineering. His new lab at UVa will focus on tissue engineering, biomaterials, and cellular redox state to treat diseases and disorders within the human central nervous system.

Will Brewer (ChemEngr'12) has applied to grad schools across the nation to pursue a doctorate in material science. Prior to this, he spent almost two years at Micron Technology. His time at Micron provided him both a great understanding of the semiconductor industry and clarity on his career goals. He and his wife recently celebrated their one-year wedding anniversary in San Francisco.

Professor Rich Noble received the Institute of Chemical Engineers (IChemE) 2013 Innovator of the Year Award at the IChemE Awards and Annual Dinner in the United Kingdom.

Department Chair Dan Schwartz was elected to the Chair line of the American Chemical Society's Division of Colloid and Surface Chemistry. He will serve as vice chair in 2014, chair elect in 2015, division chair in 2016, and past chair in 2017.

Professor Al Weimer gave the Keynote Friedlander Lecture at the 2013 Annual Meeting of the American Association for Aerosol Research.

Stansbury group graduate student Alan Aguirre was chosen as the AIChE Featured Young Professional (YP) for the month of November.

As we begin the Spring 2014 semester, the dept is abuzz with news! Of particular interest are the new signature initiatives spearheaded by our energetic alumni advisory board: a new alumni student mentoring program and the 1904 Society. You can read more about these and other efforts of the advisory board in our feature article.

Our undergraduate enrollment has reached record proportions, and there are projections that the growth will continue into the near future. Not only are we now the second largest department in the college (behind only Mechanical Engineering), we are also amongst the Top 10 largest departments in the country based on undergraduate enrollment. While the increase in our faculty numbers has lagged behind that of our students, we are pursuing an aggressive strategy for faculty growth, and the next few months will be filled with the visits of prospective faculty members. We hope to have some exciting news on that front by this summer.

Over the last year, I have written about our Pillars of Excellence philosophy toward research in the department and announced two research symposia focusing on departmental research in Energy and Bioengineering. Following on the heels of these successful events, we are planning a third symposium in the topic of Materials Science and Engineering, which is slated for Thursday, March 13. Members of the faculty, including Chris Bowman, Arthi Jayaraman, Charles Musgrave, and myself, will discuss exciting research involving the preparation, characterization, and applications of novel materials. We expect that many of our current students will attend, and we hope to see many alumni and other members of the community. 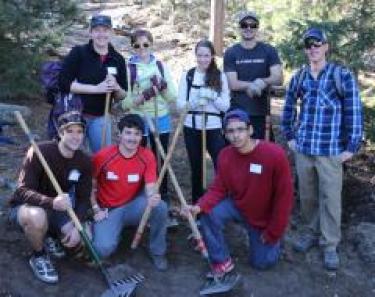