Our MAP to Bridge the Gap

Welcome to CU Boulder’s Minorities and Philosophy (MAP) Working Group. We are dedicated to hosting talks, reading groups, and other events related to minority issues in the profession; theoretical issues regarding philosophy of gender, race, sexual orientation, disability, etc.; and philosophy done from minority perspectives. We are a chapter of the national Minorities and Philosophy group We are funded by MAP..
MAP Faculty Advisor: Professor Raul Saucedo.
MAP Graduate Coordinators: Alexandra Lloyd, Lorenzo Nericcio, Gagan Sapkota.
Our funding comes from MAP, the CHA (Center for the Humanities and the Arts) at CU, the Department of Philosophy, and the Center for Values and Social Policy.
If you are interested in organizing an event for MAP at CU-Boulder, please contact us.
#ILookLikeAPhilosopher
On Wednesday 2/27/2019, Norlin Library hosted #ILookLikeAPhilosopher, featuring panelists Profs. Heather Demarest, Ajume Wingo, and Mitzi Lee, who talked about how they got into philosophy, their experiences as students and professionals, and ideas about diversity and the future of the field. The event was organized by Frederick Carey, the Philosophy Librarian, and was sponsored by Norlin Library, the CU Boulder chapter of MAP (Minorities in Philosophy), and the Women in Philosophy Group. The Library offered free food and refreshments, and the event was attended by approximately 40 undergraduates, graduates and faculty members. 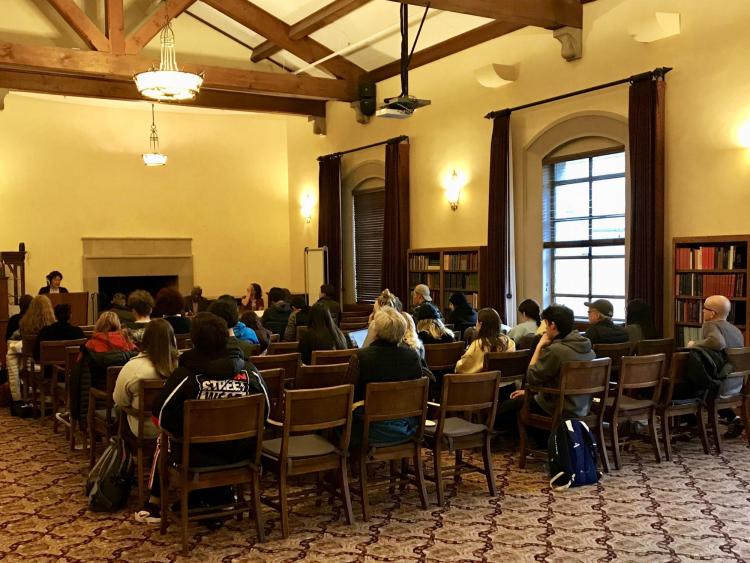 CVSP Visiting Fellow Cara Nine has agreed to join us for a discussion on immigration. In particular, we will take up the question of whether the high migration of academics skews our understanding of the issues.

This week, we will discuss the aftermath of the #metoo movement. We will focus on the divergent reactions to different stories and discuss what might account for such divergence. Furthermore, we will discuss how we should respond given that some individuals have taken responsibility and apologized for their actions. What reaction should we have to such an apology?

I am including here the links to the article on Louis CK's and Aziz Ansari's actions and also to the apology issued by Louis CK. Warning: Please note that these texts may be triggering for some readers! Please join us even if you do not have time to take a look at them.

This week, we will discuss the article below by political philosopher Philip Petit:

https://www.newstatesman.com/politics/brexit/2019/02/why-brexit-distorts-will-people
Broadly, we will discuss the issue of minorities and democracy through the lens of the current political conundrum in which the UK has found itself in the wake of its 2016 vote to withdraw from the European Union. The deadline for withdrawal is coming up on March 29th, and there is still no deal in place for the UK's exit. Many are calling for a second referendum to decide the UK's fate; others claim that a second referendum would be a problem for the legitimacy of the democratic process. Please join us even if you do not get a chance to read the article!
Fall 2018 events

Professor Brian Talbot is new to our department this year, so this is a great opportunity to get to meet him if you haven't had the chance already!  We will be discussing discrimination and barriers faced by minorities in the legal profession. The first is a discussion on biases and resumes, and the second is on discrimination faced by minority lawyers more generally.
MAP Tea Time
Friday, October 5, 2018
10:30-11:30 Hellems 269
We will be discussing the article linked below by philosopher Kate Manne (author of Down Girl: The Logic of Misogyny) on the recent controversy over Supreme Court nominee Brett Kavanaugh. Manne invokes her concept of 'himpathy' in her analysis of the response to the accusations levied against Kavanaugh; this discussion ties into larger issues of epistemic (in)justice. The article is quite short, but do join us even if you don't get a chance to read the article!
https://www.nytimes.com/2018/09/26/opinion/brett-kavanaugh-hearing-himpathy.html

Alex Worsnip is currently a CVSP Visiting Fellow, so this would be a great opportunity to meet and chat with him if you have not yet had the chance! Alex is an assistant professor at UNC Chapel Hill and works primarily in epistemology and theory of normativity. We will be discussing  racial generalizations and moral encroachment.

This week we will be discussing a recent guest post on the Daily Nous, in which the authors argue against the use of the term 'TERF' (Trans Exclusionary Radical Feminist) in two recent articles published in Philosophy & Phenomenological Research: http://dailynous.com/2018/08/27/derogatory-language-philosophy-journal-hostility-discussion/

Jennifer Kling received her MA from our very own department at CU Boulder. She then went on to get her PhD from UNC Chapel Hill and is now an assistant professor at CU, Colorado Springs. Jennifer works primarily in the areas of social and political philosophy, and her recent research has focused on protest, self- and other-defense, and just war theory.
This week we will be discussing the famous photo that is the subject of the following article and another photo, also linked below.
https://www.theatlantic.com/notes/2016/07/a-single-photo-that-captures-race-and-policing-in-america/490664/
https://media1.s-nbcnews.com/j/newscms/2017_18/1989946/170505-ferguson-edward-crawford-se-1117a_a7a53541b17c33807ea4c03248fee60f.1200;630;7;70;5.jpg
These photos bring up issues surrounding common reactive attitudes towards protestors, and strategies that protestors and police might take in response. Do take a look at the photos, but please join us even if you do not get the chance!
**Special Addition: after our discussion of the photos, Jennifer is happy to stay from 11:30-12pm to discuss her experience as a young mother on the job market. This could be a useful discussion not only for the young women in our department, but also for anyone considering the difficulties of finding a good work/life balance.

MAP Tea Time: Professor Ajume Wingo, "A Matter of Unbound Leaders in the Lives of Africans"
April 24, 2018 2:00-4:00 Hellems 269
Abstract: Conceiving of the problems of African colonialism in geopolitical terms offers an incomplete and ultimately misleading view of the significance of the African colonial experience on the present character of African politics. Unhappily, the track record of much of ‘independent’ Africa suggests that the colonisation of Africa was not so much the cause of Africans’ lack of freedom as a manifestation of the lack of freedom, without which Africans were unable to defend themselves. Colonialism is a force that probes for a certain type of weakness or limitations in a population. Colonialism seeks out certain 'freedom voids' -- populations that lack the qualities of a free citizenry. I argue that Africans would do better to focus instead on the more general political problem of how any state, regardless of its experience with colonialism, must create and sustain the institutions that support the security and freedom of its citizens.
- 10th Annual Conference of the American Association of Mexican Philosophers (AAMP)
September 8-9, Hellems 269

MAP, the CVSP, and the Philosophy Department are co-sponsoring the 10th Annual Conference of the American Association of Mexican Philosophers (AAMP). Talks in all areas of philosophy by US-based philosophers of Mexican origin/descent. For the full schedule, see here.

Undergraduates interested in joining the reading group may apply to Anthony Kelley.

- Emma McClure (University of Toronto), "A Duty to Avoid Committing Microaggressions"
Tuesday, April 25, 12:30 – 1:30, Hellems 269
Abstract: Microaggressions are small discriminatory acts that cumulatively do great harm. They range from intentional microassaults—such as hate speech—to subtler instances of discrimination that do not depend upon speaker intention. Although these subtle slights are readily apparent to those who have experienced a pattern of discrimination, they are almost invisible to those who lack this lived experience. Psychologists and philosophers have responded to these troubling patterns by focusing on the duties of audiences. In this paper, I take a different approach: I suggest that speakers have a duty to censor themselves and avoid committing microaggressions.
- PhD Candidate Alexandra Lloyd, "Racial Profiling and Suspect Descriptions: An Epistemic Approach"
Friday, November 8th, 2:00-3:15pm, HUMN 335
Abstract: The extensive literature on racial profiling tends to view the practice as one in need of significant justification in light of the fact that it makes race a salient feature of policing. There is considerable consensus that racial profiling is morally wrong because it disproportionately burdens the members of the racial group in question (Banks, 1075). However, Richard Banks argues that police use of suspect descriptions shares with racial profiling the features that make it morally problematic and therefore ought to be subject to the same scrutiny. In what follows, I dispute Banks’ claim and argue that in virtue of certain epistemic features that obtain in the practice of racial profiling but not the use of suspect descriptions, the two practices are in fact not equally morally problematic.
- Prof. Bonnie Steinbock, “My Life as a Woman in Philosophy”
Tuesday, October 4, 3:30-5:00, Hellems 269
Women in academia continue to face challenges in male-dominated fields, and especially when they combine career and family. Bonnie Steinbock, now an emerita from the University at Albany's Philosophy Department, reflects on the challenges and rewards of a career in philosophy and bioethics. Come and ask questions and share experiences.
This Women in Philosophy Group event is co-sponsored by the Center for Values and Social Policy, the Department of Philosophy, the Department’s Climate Committee, and the Department’s Minorities and Philosophy Working Group.

- Prof. John Witt
Friday, February 24, 12:00-1:00, Hellems 269
We will be joined by John Witt, a distinguished professor of law and history at Yale.  Professor Witt was the chair of the committee at Yale that recently voted to rename a residential college there that had been named after John C. Calhoun.  You can read a recent story about the controversy here:

Professor Witt will give us some background about the particular naming controversy there and discuss some of the arguments that people offered on both sides of it, but our hope is that this will mostly be a facilitated conversation with him about the general issues that this particular case raises.

Abstract: In this article, we examine the arguments and claims surrounding the most recent legal challenge to affirmative action in higher education admissions, Students for Fair Admissions v. Harvard University. Using philosophical inquiry grounded in critical race theory, we argue that the most common discussion points in this and similar cases center on a baseless accusation that the reason that elite institutions of higher education may be using negative action against Asian American applicants is to admit instead other students of color using race-conscious affirmative action. We analyze the controversy surrounding Asian Americans, negative action, and affirmative action with the aim of illuminating how key concepts such as racial discrimination and diversity are central to a politics of resentment that is developing further around selective college admissions.

- Prof. Luvell Anderson (Univ. of Memphis), ’Navigating Racial Satire’, 7/21/2016, sponsored by MAP, and by the Think! talk series
Abstract: What has to go wrong in order for racial satire to be racist? Does the fact that something is satirical automatically mean it is free from blame? In this talk Professor Anderson will explore these issues and offer suggestions on how to broach racial subjects satirically.
Luvell Anderson (PhD, Rutgers University) is currently Assistant Professor of Philosophy at the University of Memphis. Before coming to Memphis, he was Alain Locke Postdoctoral Fellow at Pennsylvania State University. His research lies primarily in Philosophy of Language, Philosophy of Race, and Aesthetics. He has published articles on the semantics of racial slurs and on racist humor.
- Shelley Wilcox (Professor of Philosophy, SFSU) Teatime talk on the topic of Immigration and Moral Problems With ‘Attrition Through Enforcement’.

Committee on the History and Philosophy of Science (CHPS)