Welcoming in a big year for Music Buffs 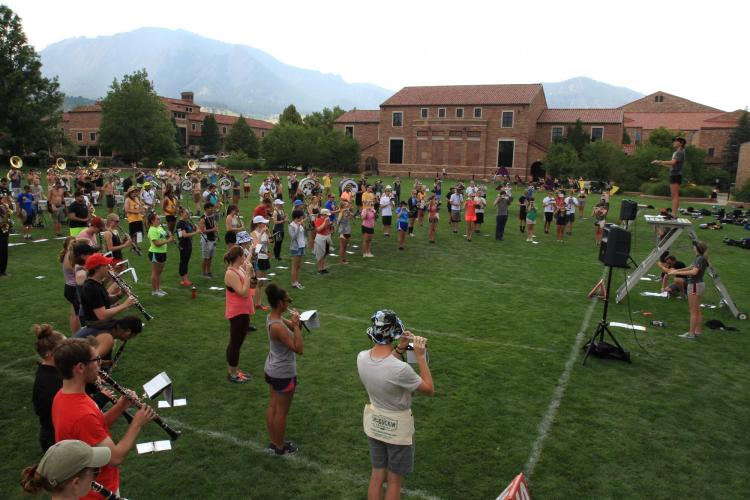 The “Golden Buffalo” marching band gearing up for an exciting fall semester.

As much as middle and high school students may dread the beginning of a new school year, students and faculty at the College of Music could not be more excited to get back on campus and start the 2018-19 academic year. And there’s much to be enthusiastic about, including performances, special events and the upcoming groundbreaking on the expanded Imig Music Building.

With new performance, rehearsal, studio and classroom spaces planned for the expansion on the west side of the building, the college community is preparing for big changes that will help usher in the new era of music at CU Boulder. Groundbreaking is planned for January; read more about the expansion project in the Giving section.

This fall, the College of Music welcomes a handful of new members to its community, including three new faculty positions and several new staff. Professor of Musicology Susan Thomas is the new head of the American Music Research Center, world-renowned baroque musician Robert Hill takes over the harpsichord studio and the Early Music Ensemble and new Director of Vocal Pedagogy John Seesholtz plans to start a voice lab to further the college’s rich tradition of vocal pedagogy. The College of Music also welcomes several new staff, including Katie Skayhan, community engagement and social innovation coordinator for the college.

Returning undergraduate, master’s and doctoral students are anticipating this new school year and all the exciting opportunities waiting for them.

“I am most excited to be back in the same place as all of the other music students at CU,” says rising sophomore flute performance major Claire Gunsbury. “What really intrigues me is growing as a performer … I want to be able to engage with the audience more in each performance I give.”

Gunsbury will join several other College of Music students in a performance at Carnegie Hall this November. It’s been two years since the first CU at Carnegie showcase concert, and these students, faculty and alumni are beyond excited to travel to New York and perform in one of the world’s most iconic concert halls. “I am so grateful for the opportunity to perform at such a high caliber venue,” says Gunsbury.

“Performing in Carnegie Hall has been a dream of mine for a long time, and I’m so excited that it is becoming a reality this fall,” says oboe and English horn DMA Kristin Weber. “The past year I spent a lot of time thinking about ‘finding my own voice, something that [Senior Instructor of Oboe] Peter [Cooper] encourages his students to do.”

More exciting things are waiting for Weber once she completes her DMA next year, as she was recently awarded positions in the Wichita Symphony, Tulsa Symphony and Tulsa Opera. With a bright future ahead, Weber knows she will still be sad to leave Boulder. “CU is truly such a special school. The students here really look out for each other, support each other and build each other up. The professors and faculty in the College of Music are unbelievably supportive as well and truly want their students to succeed.”

Saxophonist and recent DMA graduate Ryan Van Scoyk returns to Boulder to perform with the Wind Symphony in February after winning the graduate concerto competition last spring. “Knowing how strong the competition was, I was exhilarated to even advance to the finals,” says Van Scoyk. “I could not be more excited for the concert and especially to play with Dr. McKinney and our fantastic Wind Symphony.”

Van Scoyk begins his new job teaching instrumental music at Golden View Classical Academy this fall and hopes to continue as a performing artist in the Denver area. “My main goal in life is to combine a career of performing and teaching, and I believe CU has set me up beautifully to achieve this.”

Early this fall, students and faculty from all corners of the college will come together for CU Bernstein at 100, the College of Music’s contribution to the worldwide celebration of composer, conductor, educator, musician, cultural ambassador and humanitarian Leonard Bernstein. The college will celebrate Bernstein’s centennial accordingly, with various performances, discussions, lectures, master classes and screenings. Read more about CU Bernstein at 100 here.

Along with the Bernstein celebration and the hundreds of free student and faculty performances happening at the College of Music this year, there are many other musical performances to look forward to. Dee Dee Bridgewater and The Memphis Soulphany will kick off the 2019-19 Artist Series season at the end of September, followed by a handful of other amazing musical performances throughout the year. Musical artists include the Venice Baroque Orchestra with guest Anna Fusek on the recorder, world-famous violinist Sarah Chang, Canadian Brass, Silkroad Ensemble and Tafelmusik. More information on the Artist Series and individual performances can be found at cupresents.org.

Longtime college supporters Jeannie and Jack Thompson gave a gift naming the dean’s office in the expanded Imig in honor of Bruce and Marcy Benson. END_OF_DOCUMENT_TOKEN_TO_BE_REPLACED

In part two of this blog series from junior Curtis Sellers, we have tips for how to make the most of your time as a student at the CU Boulder College of Music. END_OF_DOCUMENT_TOKEN_TO_BE_REPLACED

For Claire Glover (BME ’17)—recipient of the Colorado Music Educator Association’s 2020 Young Music Educator Award—the mentorship she received at the College of Music is key to her success. END_OF_DOCUMENT_TOKEN_TO_BE_REPLACED
Return to the top of the page