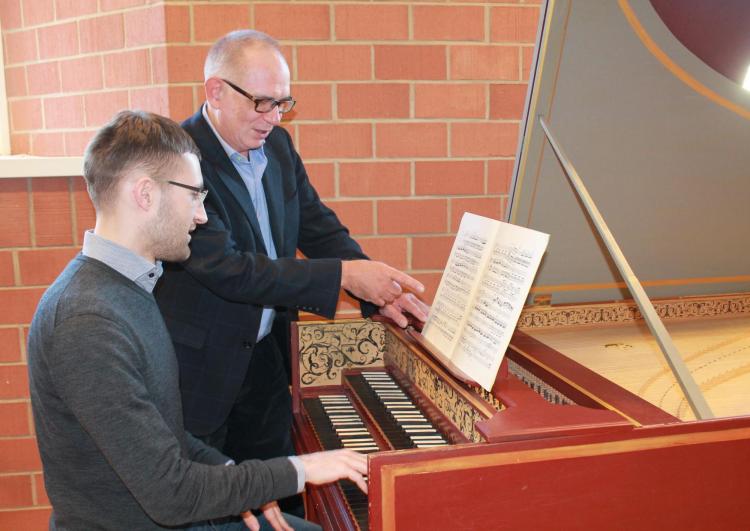 Professor of Harpsichord and Eugene D. Eaton, Jr. Chair in Baroque Music Performance Robert Hill comes to the College of Music from the Staatliche Hochschule für Musik in Freiburg, Germany.

This fall, the College of Music community welcomes three fresh faculty faces to the fold, as the musicology, voice and keyboard departments fill seats vacated by the college’s three newest professors emeriti, Thomas Riis, Patrick Mason and Elizabeth Farr. This summer, we’ll be introducing you to our new faculty in a three-part series, beginning with Robert Hill, professor of harpsichord and the first Eugene D. Eaton, Jr., Chair in Baroque Music Performance.

A world-renowned expert in baroque music, Robert Hill has been teaching historical keyboards since 1990 at the Staatliche Hochschule für Musik in Freiburg, Germany. He’s helped develop and refine the talents of top students on a global stage at the epicenter of historical performance practice, and now he brings his experience and passion for the era to Boulder.

“It’s been a project of mine to get back to the U.S., and this position is one of the most interesting in the country,” Hill says. “There are relatively few positions that expressly look for somebody who specializes in baroque performance practice and is committed to working with the larger community of the college to think about how we play this historically oriented music.”

That the College of Music is situated on the campus of a large research university—one rife with opportunities to network and build momentum around early music study—is just one draw for Hill. Combined with a named program with donor support, it was plenty to lure him to CU Boulder.

“The immediate goal is to start building up a more visible, international program to attract students of the highest quality. But it’s also the vision of the dean and [late CU alum and early music lover] Eugene Eaton to network with my colleagues to figure out where my work fits best in the context of the college.”

Hill brings decades of both scholarly and performance experience to the role: In addition to studying at Amsterdam Conservatory and Harvard University, he taught musicology and performance at Duke University, founded baroque chamber music ensemble Musick for the Generall Peace, and has performed in numerous other chamber groups over the past 40 years. His work has focused primarily on the leading composer of the baroque era, Johann Sebastian Bach, and the important role he and his contemporaries have played throughout musical history.

“Improvisation was important in the 18th century, and that concept can help us, for example, to introduce music to a child who’s just learning to play it. For early musicians, improvisation helped make music more spontaneous and personal.”

In addition to its impact on subsequent musical movements, Hill is also interested in the societal developments that influenced the music of the 18th century.

“If we try to play this music without including certain essential details about how it was viewed and received in its own time, it becomes difficult to access,” Hill explains. “Revitalizing that contextual perspective applies to music of all eras and helps us perform and process the music culturally and intellectually, rather than just technically and emotionally.”

As for the future of early music, Hill says the phrase may not be as much of an oxymoron as one might think—a concept he’s looking forward to exploring more with faculty and students at the College of Music.

“There’s been something of an ‘early music creep.’ When people at the beginning of the 20th century were establishing the concept of early music, they were focusing on the early 18th century. But 120 years have gone by and now we’re talking about the neoclassical, first Viennese school as early music. So you have to ask yourself, ‘When does music stop being early?’”

Curiosity drives Lydia Wagenknecht, a PhD candidate in ethnomusicology and recent recipient of a Fulbright Research Award. “I care that my research will help us understand something in a more broad-based way that we didn’t understand before,” she says. END_OF_DOCUMENT_TOKEN_TO_BE_REPLACED

We’re so excited to welcome alumnus Damani Phillips back to campus this week and to present him the College of Music’s 2022 Distinguished Alumnus Award at our commencement ceremony on May 5! “The versatile training provided by CU has been the cornerstone of my success to date, and has enabled me to do and be many things well beyond typical expectations,” he says. Meet Phillips and discover his powerful advice to graduating Music Buffs. END_OF_DOCUMENT_TOKEN_TO_BE_REPLACED

On May 5, we look forward to welcoming back Judith Glyde, formerly professor of cello and chamber music at the College of Music and chair of our string faculty. Since retiring in 2014 to live in New York City, the professor emerita she has been active with the college’s alumni community there, offering tremendous support to Forever Buffs who are now living and working in the city. END_OF_DOCUMENT_TOKEN_TO_BE_REPLACED
Return to the top of the page