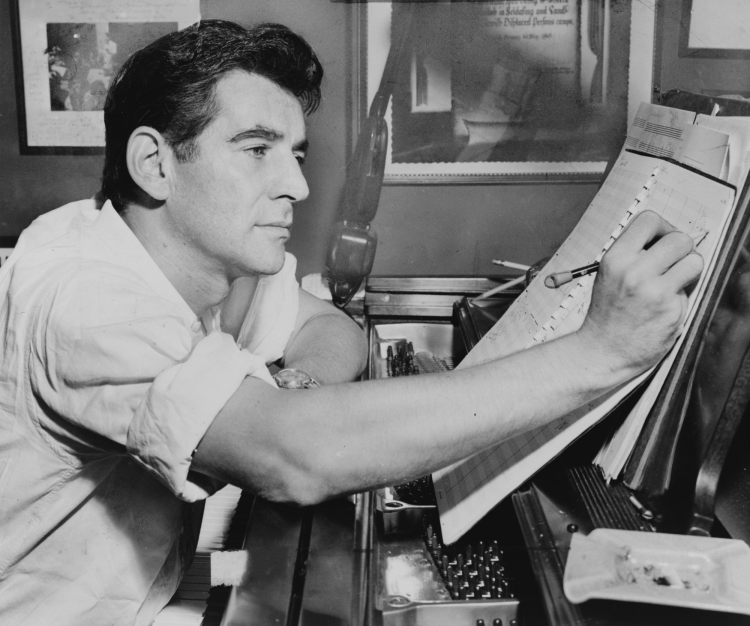 CU’s contribution to the worldwide celebration of the composer will feature concerts from all corners of the college and culminate with Eklund Opera’s “West Side Story.” Photos courtesy the Leonard Bernstein office.

As 20th century American composers go, only a handful of names rise to the level of a Mozart or Beethoven for those outside the classical music world. This fall, the College of Music joins a worldwide celebration of one of them as it puts on CU Bernstein at 100.

“It’s an opportunity to celebrate American music, music education and humanitarianism through music and the arts.”

Professor of Piano Andrew Cooperstock is organizing this coming together in the name of Leonard Bernstein. Most well known as the composer of the timeless musicals “West Side Story” and “Candide,” Bernstein was also a conductor—most famously leading the New York Philharmonic for 40 years—an educator, a humanitarian and a writer.

Born in Massachusetts in 1918, Leonard Bernstein began his prolific career taking piano lessons as a boy. After graduating from Harvard, he soon became a musical force to be reckoned with, conducting ensembles around the world and composing dozens of jazz numbers, symphonies, solo piano works and more from the 1940s until his death in 1990.

Cooperstock—who released the first recording of Bernstein’s complete solo piano works last year—says first and foremost, Bernstein was a communicator. “Through being a soloist, conductor, writer, speaker, television personality or lecturer, he was communicating his ideas through music. And to me that’s what music is all about.”

During a time when the influence of the 19th century European romantics still dominated new music, Cooperstock says Bernstein was one of the few composers in the U.S. to search for a truly American voice.

“Gershwin, Copland and Bernstein were using folk, gospel, jazz, the wide-open spaces of the West and the streets of New York to create really American scenes, and I find that fascinating,” Cooperstock explains. “They experimented with different styles—some more popular, some more serious—to create something unique.”

Bernstein also made it a priority to support young musicians and composers, pioneering his illustrative Young People’s Concerts to open children’s eyes to music through interactive, televised performances with the New York Philharmonic. This could perhaps be why, nearly 30 years after his death, his impact is still felt in the hundreds of music halls around the world showcasing Bernstein’s music this year.

“The events at CU Boulder perfectly demonstrate how the Leonard Bernstein at 100 festivities are bringing Bernstein right into the student community,” says Jamie Bernstein, who recently published a book, “Famous Father Girl: A Memoir of Growing Up Bernstein.”

She continues, “This is one of so many ways that young people can discover my father's multifaceted gifts to the world: his musical compositions, from the concert hall to Broadway and beyond; his recordings and videos as a world-class conductor; his celebrated role as ‘America's music teacher’ and his lifelong work as an activist trying however he could to make the world a better place. I hope that after this exciting week of activities, CU Boulder will have turned into one big Bernstein fan club!”

Bernstein, Oja and Dicterow will be in Boulder the final week of September, beginning with a colloquium moderated by the new director of the American Music Research Center, Susan Thomas, on Sept. 24. The following evening, Jamie Bernstein hosts a special Faculty Tuesday performance of her father’s chamber music, and on Thursday, Sept. 27, she will narrate a CU Symphony Orchestra concert featuring a guest performance by Dicterow.

A few weeks later, CU Bernstein at 100 wraps up with a film screening of “West Side Story,” accompanied by a panel discussion with Eklund Opera Program Director Leigh Holman and Department of Cinema Studies & Moving Image Arts Director Ernesto R. Acevedo-Muñoz, and Eklund Opera’s production of “West Side Story.” Cooperstock says it’s fitting to cap off the festival with the classic retelling of “Romeo and Juliet” set in 1950s New York.

“It brings together all aspects of Bernstein. The music, the story, the social aspects,” he says.

Virtually every corner of the College of Music will program Bernstein’s works during September and October; to view a full list of events—including the kickoff CU on the Weekend talk presented by the Music Theory area on Saturday, Sept. 8—visit cupresents.org.

For Cooperstock, orchestrating CU Bernstein at 100 has become a personal tribute to the formative impact the icon had on his own musical journey.

“I’ve been familiar with his music my whole life. He lived during my time and he was from my country and I feel like I can relate well to his music. His music expresses something about culture and humanity.”

And as the College of Music prepares to celebrate its own 100th birthday in 2020, Cooperstock says the college-wide celebration of Bernstein’s centennial comes at a perfect time.

“As we consider the purpose of music education going forward, there’s no better musical figure than Bernstein to urge us to think about the importance of the arts. I also feel like one of Bernstein’s missions was to bring people together, and that’s my vision for this festival.”

As we celebrate National Hispanic Heritage Month, we're inspired by the resilience and determination of DMA student Pablo Beltran. END_OF_DOCUMENT_TOKEN_TO_BE_REPLACED

We’re thrilled to introduce Raven Dow-Hygelund and Anna Kallinikos as the most recent recipients of the College of Music’s Sher Distinguished Musician Scholarship. END_OF_DOCUMENT_TOKEN_TO_BE_REPLACED
Return to the top of the page