Passion for athletics leads to student internship at Nike 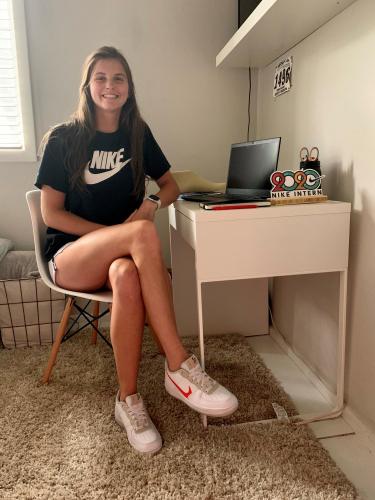 During the summer of 2020 after my junior year, I worked as a mechanical engineering intern in the Rapid Prototyping Lab at Nike. I found out about this position through CU athletics, as I’m a student-athlete. Each year Nike looks to hire one intern out of the junior class of student-athletes, so I applied through this opportunity, received two phone interviews and was hired by mid- December 2019! Although I went through athletics to apply, Nike also has an online platform specifically for applying to various internship positions. I was originally hired into the Flyknit department, which would’ve been in person in Portland, Oregon. Once the internship program switched to a virtual setting, I was moved to the Rapid Prototyping Lab.

My job was more of a data analytics position and was split up into three main projects: data analysis, cost algorithm and website creation. I used the data tracking system that they already had in place for recording which areas of Nike were requesting 3D print jobs, what printer they were using, what project they were working on, how long the prints took and so much more. From this data, it was my job to determine trends for the previous fiscal year and display this data in a useful format. I used this data to create a theoretical cost algorithm for the price of a print job in the RP lab if they were to charge (they don’t as an internal department) and what their return on investment is if they were to otherwise outsource rapid prototyping. I also created a new website that was updated to be sleeker and display information more effectively.

I also attended so many listening and learning sessions with different company employees and really expanded my network. There were also tons of intern events and one large intern project that had teams compete to come up with the best idea for various new business ventures. It was an incredible experience. I learned a lot and would highly recommend the Nike Internship Program! I know it would be even better in an in-person setting.

My one piece of advice would be to get an internship or work on a long-term project the summer after sophomore year to really put yourself ahead for getting a junior-year internship. They also hire many interns full-time, which is where I will be starting this coming August 2021.