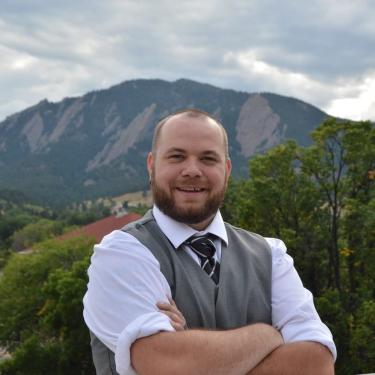 My name is Christopher Doyle. I am in the second to last semester of my engineering degree path. I am originally from the west suburbs of Chicago, Illinois, though I moved to Aurora, Colorado in 2007 after I graduated high school.

Two years after completing high school, I joined the United States Navy where I served just over five years as a Nuclear Engineering Electronic Technician. It was my work in the Navy that drove me to my career choice of mechanical engineering. Working on nuclear power plants really showed me that I truly enjoy thermodynamics, fluid mechanics and energy analysis style work. It was also the Navy that has helped me decide to pursue a career in the defense sector, continuing to protect the lives of those I care about.

Upon exiting the military and starting college as a non-traditional student, I was lucky enough to become a member of the Colorado Space Grant Consortium. Within this program, I have built autonomous, obstacle-avoiding robots. I have launched multiple high-altitude weather balloon satellites, including one that recorded the shadow of the moon moving across Earth during the 2017 Total Solar Eclipse from roughly 80,000 feet high. This footage made it onto local Denver 9 News. I built a payload with two classmates that we launched into space from NASA’s Wallops Flight Facility on a sounding rocket.

My most important success while at community college and here at CU is having had the privilege of becoming a teaching assistant and mentor to many of my classmates, helping them follow their engineering aspirations. Engineering is my team sport, and I want to do the best I can to help my teammates succeed. I enjoy helping my peers, as well as, my future colleagues solve any issues that arise, from the simple to the complex. Giving back to the community at large is a huge part of who I am and want to continue to be.

Making it to where I am now in my higher education pursuit has been a difficult but exciting journey. I would not be where I am today if it were not for the love and support from my amazing family. I met my wonderful wife when we were only 12 years old in middle school. In 2011 we got married and now have three beautiful young daughters who mean the world and more to us both. My oldest daughter is always asking me how things are made. I am raising my replacement, and I could not be prouder.

My big audacious goal is to make the world a safer place for everyone to live in. I think that engineering is the best way to accomplish this goal and the most rewarding.