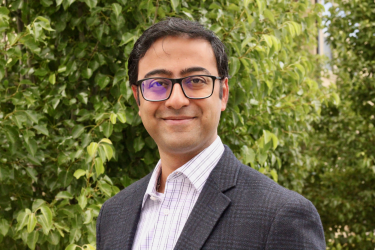 Debanjan Mukherjee joined the Department of Mechanical Engineering at University of Colorado Boulder in January 2019 as an assistant professor.

Mukherjee was born and raised in the vibrant Indian metropolis of Kolkata known as the City of Joy. Mukherjee completed his undergraduate degree in ocean engineering at the Indian Institute of Technology, Madras. He then pursued a master’s degree in mechanical engineering at University of California Berkeley where he worked on ocean renewable energy technologies. Mukherjee completed his PhD under Professor Tarek Zohdi, also at Berkeley, working on computational mechanics of particulate flows. Mukherjee’s long-standing interest in biological systems combined with his training in fluid mechanics in a variety of contexts led him to then pursue a post-doctoral fellowship in cardiovascular biomechanics under Professor Shawn Shadden’s supervision at Berkeley.

Mukherjee was the recipient of the prestigious American Heart Association post-doctoral fellowship and a Burroughs Wellcome Fund collaborative research award. He has also won several best paper/poster awards and an award for outstanding contributions as a graduate student instructor.

Mukherjee is passionate about using his role as a researcher and educator to bring about transformative changes in society. In his new role, Mukherjee is establishing an interdisciplinary research group that studies complex flow physics underlying physiological and biomedical phenomena. His research group employs engineering principles to understand basic mechanisms of severe diseases like stroke and heart attack which together are the leading cause of death and disability worldwide. He aims not only to understand why and how such diseases occur but also how better treatment plans or medical devices could be developed to improve patient health. Having had the privilege of quality education himself, Mukherjee is also passionate about serving society as an educator, broadening participation of students from diverse gender, ethnic and societal backgrounds and enabling access to education for all students both in the United States as well as in India.

Though Mukherjee’s career path appears to be academic, Mukherjee made his first paycheck as a musician and continues to pursue interests in music. Mukherjee has performed Indian music at pubs across Berkeley and San Francisco. In addition, Mukherjee also has an interest in food and cooking, comic books and graphic arts.