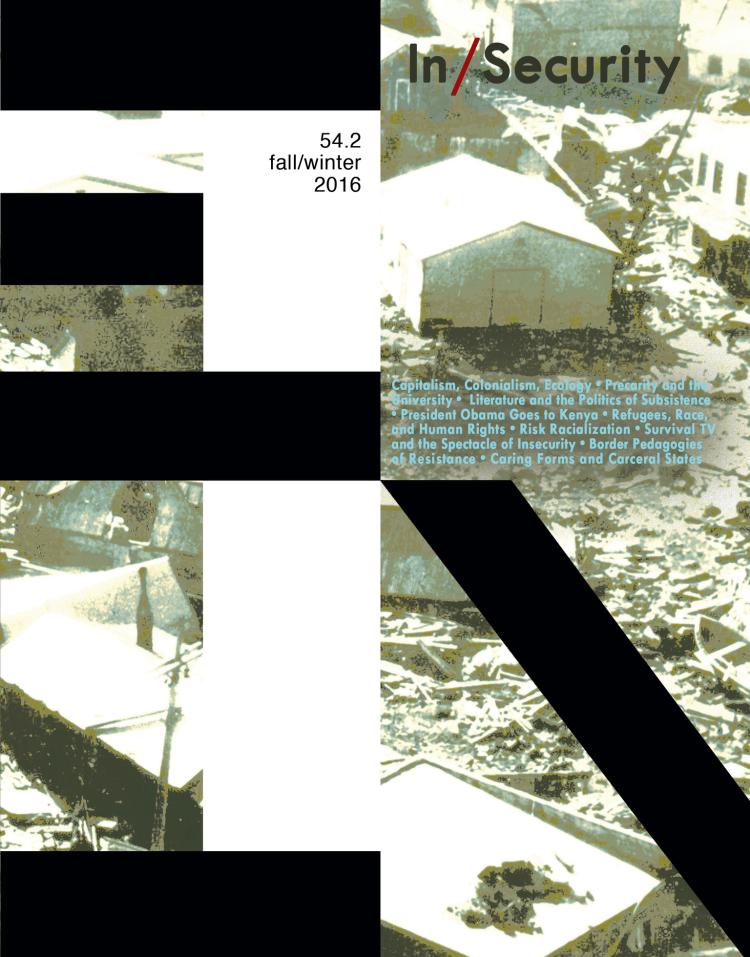 This issue of ELN takes for its focus the topic of security and its necessary correlate, insecurity. As Itty Abraham notes, the term “security” is a “traveling signifier” that has “attached itself to every scale of human activity, from the individual to the international, even to outer space; from comestible (food security), natural (environmental security), financial (security/securities), and territorial (homeland security) to virtual (cyber security); to forms of community, from Social Security to collective security, which is the principle behind the United Nations.” Such proliferation, however, signifies not so much the incoherence of the term, but rather, the radical inflation of insecurities—whether material, real, imagined, or manufactured—that seem to beleaguer us. A special issue on this topic is an opportunity not only to analyze both the interconnections and contradictions between the forms and technologies of in/securities that have structured—and that continue to structure—our political climate, but also to think about the aesthetic, cultural, and institutional modes through which such concerns have been experienced and addressed at different historical and geopolitical junctures.

Giorgio Agamben points out that “[s]ecurity as the leading principle of state politics dates back to the birth of the modern state”; the imperatives of national security raise a series of questions regarding the scope of state power and action; the identification and manufacturing of domestic and foreign threats against the state (viewed as sources of “insecurity”); and the negotiation of geopolitical relations between states. But the work of thinkers like Michel Foucault and Achille Mbembe reminds us, in addition, to enquire into “the generalized instrumentalization of human existence and the material destruction of human bodies and populations” that lie at the heart of security’s imperatives (Mbembe). Their concepts of bio- and necropolitics invite attention to the ways in which particular technologies and instruments of security act on collective populations and individual bodies, managing danger, risk, and insecurity in the service of governmentality, as well as to the forms of solidarity and/or resistance these engender in consequence. Indeed, important theorizations of vulnerability and precarity (including Sara Ahmed’s The Cultural Politics of Emotion, Judith Butler’sPrecarious Life, and Bryan Turner’s Vulnerability and Human Rights) foreground the political possibilities that can inhere in shared experiences of corporeal and affective insecurity. And recent discourses of human rights—encapsulated in the United Nations Commission on Human Security’s call for a “shift [in attention] from the security of the state to the security of the people”—ask if the politics of security can be reconfigured in less coercive, or more ideologically nuanced, terms.

For the Fall/Winter 2016 issue of ELN, we invite scholars from across the range of humanities (inter)disciplines, and grounded in any historical or geocultural context, to propose contributions that enquire into the forms by which, conditions under which, and discourses through which in/security has been experienced and known. We welcome single- and -collaboratively authored essays of no longer than twenty-five manuscript pages, as well as creative works and review essays on relevant books. Questions that contributors might consider in formulating their offerings include: