Literary History and the Religious Turn 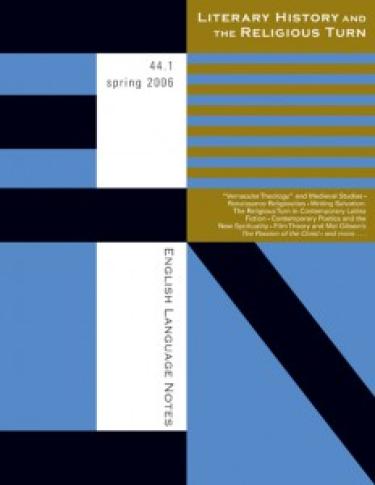 This inaugural volume of the new ELN takes on the so-called Religious Turn over the last decade in the study of literary history. As Stanley Fish remarked in a widely-cited piece published early in 2005, the academic study of religionis now “where the action is”—action that appears unlikely to diminish in intensity for quite a while. Many of the present contributors would probably object that this putative religious turn is actually more of a swerve, the explicit and self-conscious dimension of an enduring religious preoccupation among theorists, historians, and critics of literary production. One of Fish’s early books, after all, was Surprised by Sin, and much of Derrida’s writing beginning in the early 1990s both adumbrated and embodied the wider religious turn in critical and cultural theory. As Nicholas Watson and other contributors to our cluster on “vernacular theology” suggest, moreover, theology has, mutatis mutandis, been at the center of medieval literary studies for half a century. “Literary History and the Religious Turn,” then, takes up one of the most undeniably pressing of current issues in a variety of fields within the humanities.