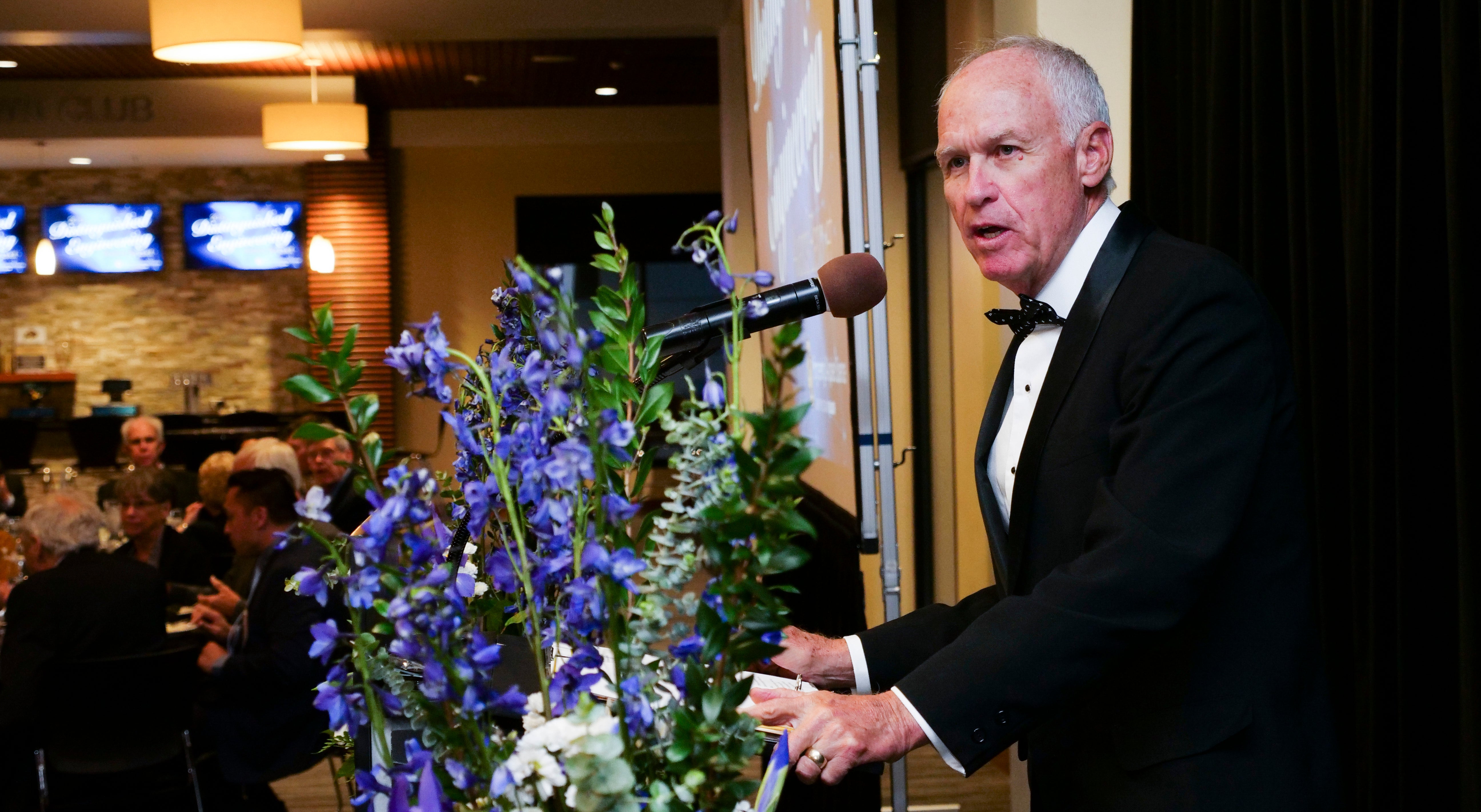 As the college’s chief financial officer — among many other roles — Doug Smith (MCivEngr’75) has made a lasting impact that will be felt well beyond his retirement this summer.

True to the University of Colorado Boulder motto, Let Your Light Shine, Smith has led construction projects that quite literally brought in the light to nearly every building of the College of Engineering and Applied Science. He also has built programs and hired people essential to the institutional DNA of the college.

After a long and successful career in the private sector, Smith was contemplating retirement when he received a call in 2013 from Rob Davis, then dean of the college. The two had worked together for years on the college’s Distinguished Engineering Alumni Awards, an award Smith himself would receive in 2016.

The call’s theme would become a familiar refrain throughout Smith’s tenure: “We have a need and you have the expertise. Can we make this work?”

Smith accepted Davis’s job offer and joined the college as an assistant dean focusing on industry and donor relations and alumni engagement.

“Doug has nearly boundless energy,” said Davis, currently Tisone Endowed Chair in chemical and biological engineering. “So it was not hard to convince him to come out of his brief retirement and join the CU Engineering team. Since then, he has served effectively and efficiently in a wide range of roles, from overseeing large building projects to leading cross-campus entrepreneurial programs to providing budget oversight and program improvements for our college — and he still takes a month off each summer to play golf!”

Smith’s area of influence quickly expanded to include building out a communications team and revamping the college’s distance learning program.

Building on the fly

It was Smith's first big building project, however, that set the stage for his greatest contributions to the college.

In 2016, he assumed responsibility for renovating the Engineering Center south wing. He began by reaching out to leaders in several departments to reimagine the space.

“We were talking about: How can we open up the building? How can we create lab spaces that people want to be in?” Smith said.

That line of questioning became the foundation for many future decisions about the expanding and evolving footprint of the college. Corridors were widened, large windows were installed, and student study areas popped up near large lobbies with cafes. The college began to look and feel different.

“It’s become open,” said Smith. “It was a closed deal. Everything was just kind of in a box. It’s just been opened to the light, to the world, to inclusiveness in so many ways.”

Never one to rest on his successes, Smith next took on the challenge of building a new aerospace engineering sciences building on CU Boulder’s East Campus. The university agreed to fund the construction if the college could raise money to fund the programming.

The generous contributions of Ann Smead and her husband, Michael Byram, made that possible. To celebrate their support, CU Boulder named the aerospace engineering sciences department in honor of Ann and H.J. “Joe” Smead, a CU Boulder engineering alumnus, industry executive and Ann’s husband until his passing in 2003.

“Doug is an outstanding project manager,” said Ann Smead. “He is a true professional and never let any situation upset him. Michael and I enjoyed our time with him as we watched him manage the construction.”

Smith said completing this project is one of his proudest moments, made prouder still because it ended up being the most cost-effective building on campus per-square-foot. This allowed the college to accelerate a planned addition that was added during construction, sort of like adding a wing to an aircraft while it’s flying. Both were completed together, and the building opened in August 2019.

And Smith had learned a lesson. After the aerospace department vacated the Engineering Center, he pushed to have a series of renovations completed while the space was unoccupied and doggedly pursued a funding strategy with campus. The renovated north wing of the Engineering Center will open this fall, featuring a new student services hub and modernized spaces for several departments, including an avalanche lab and a quantum engineering lab.

Can we make this work?

Early in Smith’s tenure, Davis asked him if he knew anything about business incubators and accelerators.

Smith’s previous career involved business startups and turnarounds, but those terms were new to him. So he reached out to Brad Feld and David Cohen of Techstars, a Boulder-based startup accelerator, for guidance. When two alumni, Fletcher Richman (ElCompEngr’14) and Ashley Tillman (EnvSt’11) approached him in April 2014 with the proposal for an accelerator, he was ready.

The hitch? They asked if it could launch in May.

Smith secured funding from the dean, and the trio announced the accelerator at the New Venture Challenge. They recruited six teams and launched the Catalyze CU startup accelerator in the summer of 2014. Two of those teams, Mallinda and Shinesty, have grown into thriving businesses, as have many other program alumni.

“I haven't met one student, faculty or staff member who hasn't been positively impacted by Doug,” Crofton said.

Smith’s influence hasn’t been confined to CU Engineering. On the heels of his success launching Catalyze, he was approached by law students, who asked him to be an advisor for the Deming Center Venture Fund. He’s been engaged with the group since 2014, meeting with them two times a week about investment strategies, due diligence and portfolio management. During his tenure, the fund has realized an internal rate of return around 17 percent.

He said working with the students has been one of the highlights of his time at CU.

“It’s just so fun,” Smith said. “There are engineering, law and business students who are a part of it. It’s their fund. I advise and coach them. Teach them a little bit. I’m there every week advising and coaching them, but it’s their deal.”

Smith has been the person deans turn to when they need results. When Bobby Braun became dean of the college, he told Smith he wanted him to be the guy who gets things done and appointed him chief financial officer — “that way, people will know you have the money.”

“What’s so funny about that is that I’ve had lots of CFOs in my career,” Smith said. “And when I tell them I am the CFO, they just laughed because they always thought I pushed the CFOs so hard to spend everything we could. It’s just a real irony of my career.”

When the pandemic hit, Keith Molenaar, then acting dean, came to Smith with an idea to renovate the BOLD Center while students were away. It was May 2020, and Molenaar wanted it completed by August.

The project was a success in part due to the contributions and effort of another alumnus, Marco Campos (CivEngr'98), who with his company Campos EPC, provided $1 million in funding with the aim of expanding services for first generation and underrepresented students.

“That was the most unbelievable thing,” Smith said. “The architects listened to the BOLD team. It was such a cool space for students, and to be able to do that during the pandemic made it a special project.”

One day, all three deans came calling. But it wasn’t to ask for another miracle from Smith. They wanted to create a scholarship in his and his wife’s name to honor his contributions to the college.

“I’ve had a lot of bosses,” Smith said. “That’s just not usually what they say to me. They think I'm a pain in the neck and want me to stop pushing the boundaries.”

“The college is indebted for Doug’s contribution as an Engineering Advisory Council member and in his second career as an associate dean,” Molenaar said. “He brought a new perspective to our decision-making through his deep experience with large engineering firms and projects. Doug has been a trusted resource for the last three deans in the areas of building construction, finance and leadership programs. Although he is leaving us, his thumbprint will be on the college for many years to come.”

Donate to the scholarship fund

The next career: Retirement

With a profound sense of accomplishment and proud of his many contributions to the college and CU, Smith will return to the plans he was making in 2012 before that fateful call from Rob Davis.

He’ll continue to have his hands in building projects with his church and plans to spend more time at his second home in Scotland playing golf. He’s also partnering with a former CU student and his company, Simple Homes, to build a house in Granby, Colorado.

Smith also plans to remain engaged with the college as an alumnus. Most of the people who know and have worked with him are certain about one thing: CU hasn’t seen the last of Doug Smith. 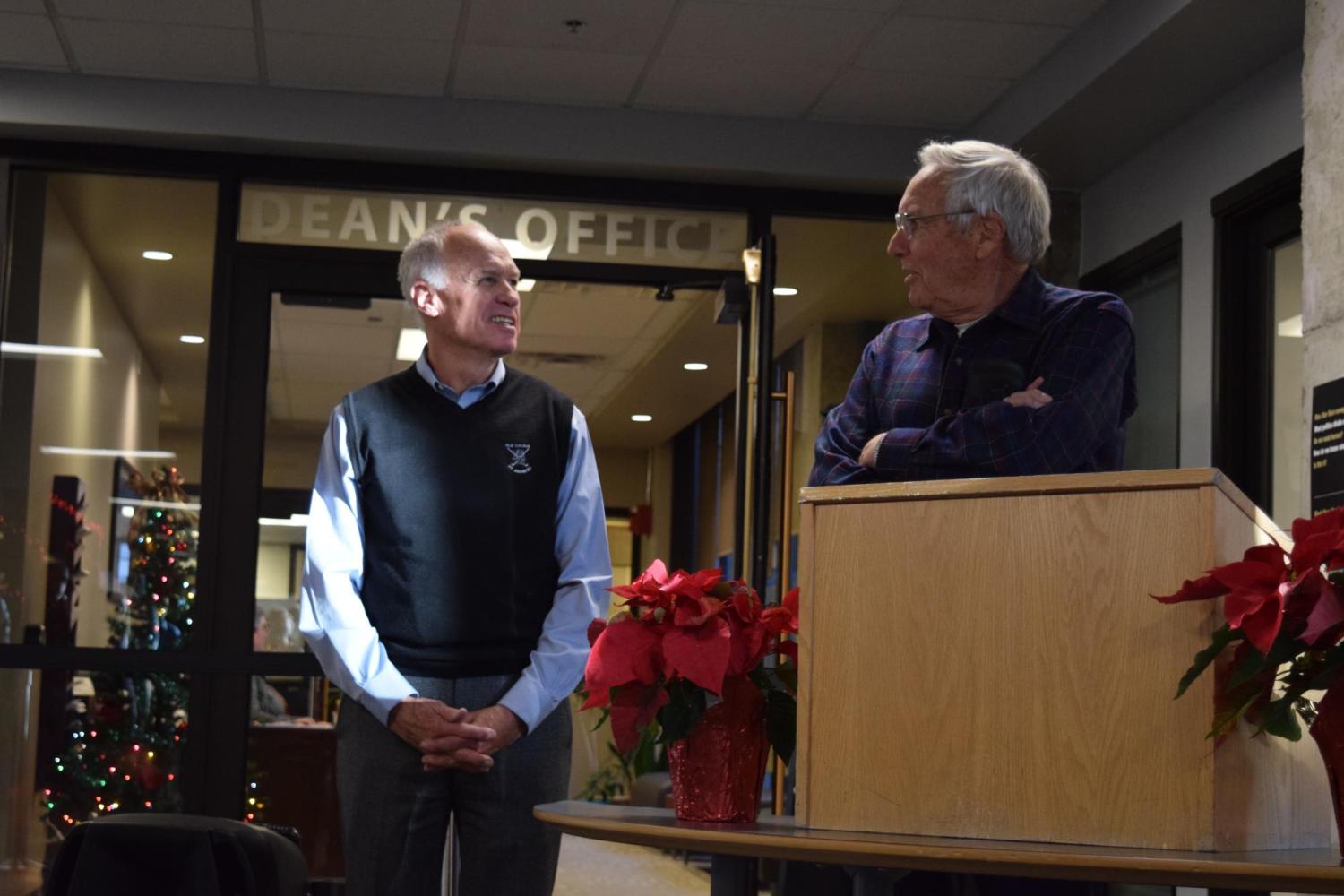 Doug with Distinguished Professor Emeritus Frank Barnes at the ribbon-cutting for the remodeled Engineering Center lobby and Dean's Suite. 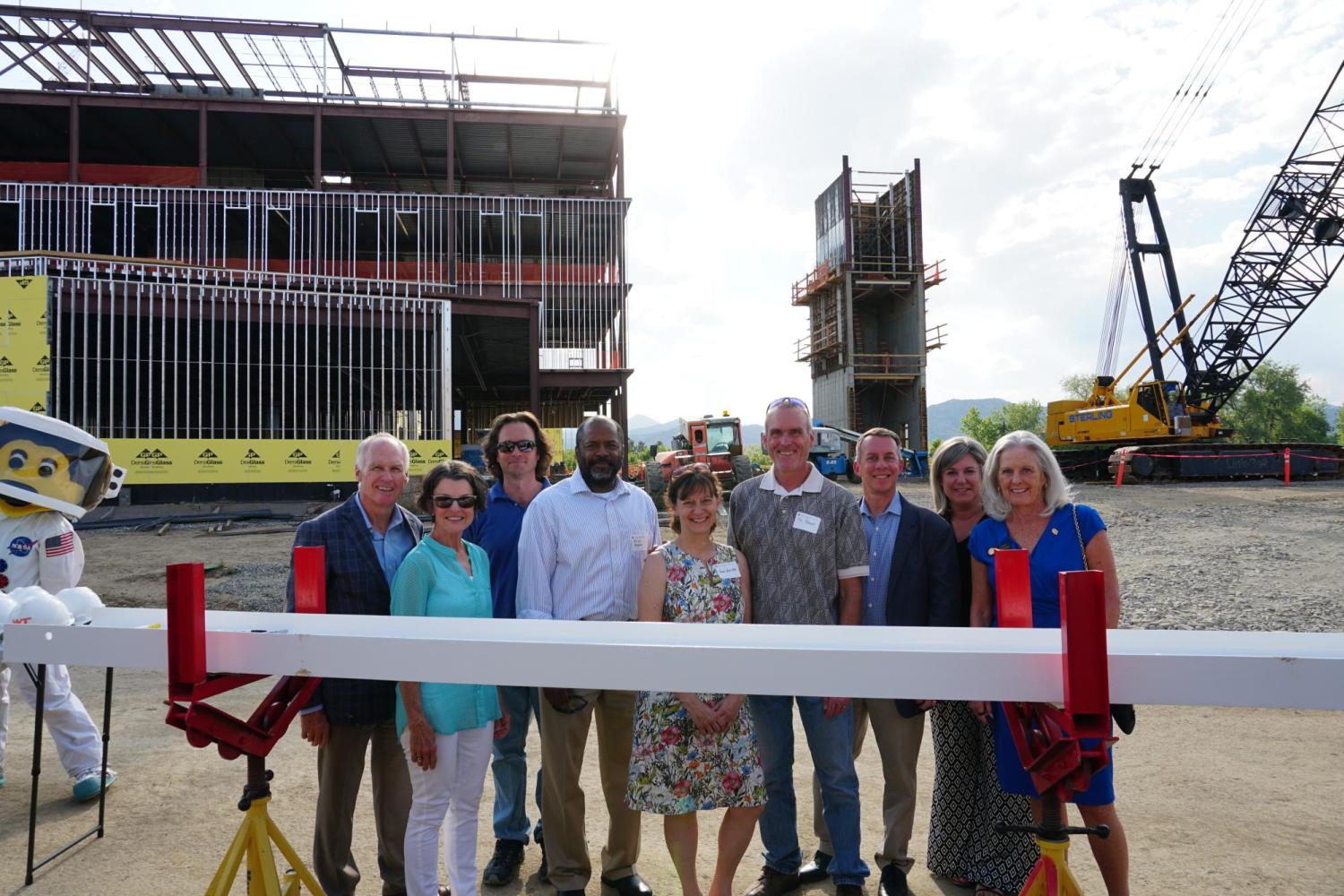 Doug (far left) at the topping-off ceremony for the Aerospace Engineering Sciences Building. 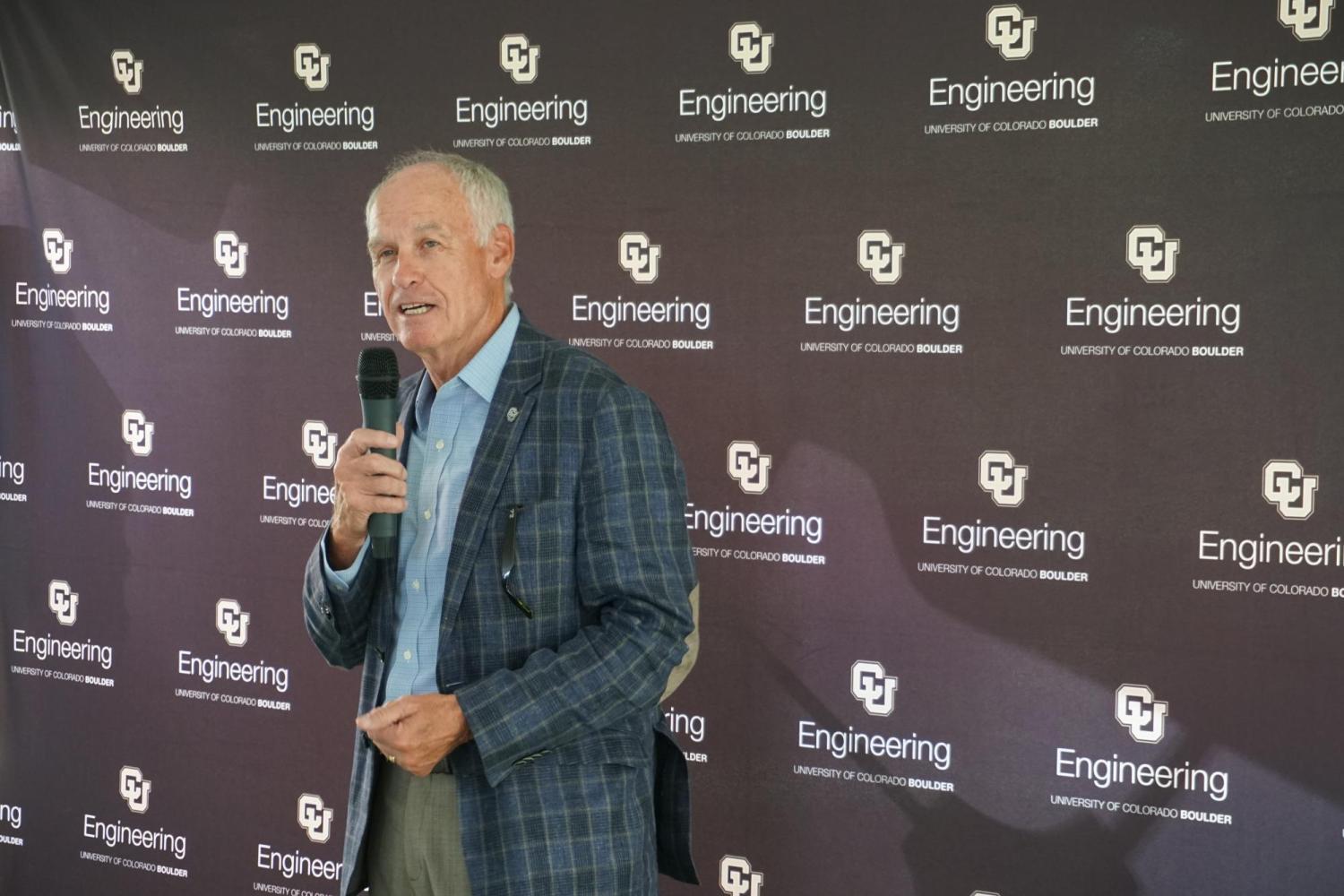 Doug speaks at the groundbreaking ceremony for the Aerospace Engineering Sciences Building. 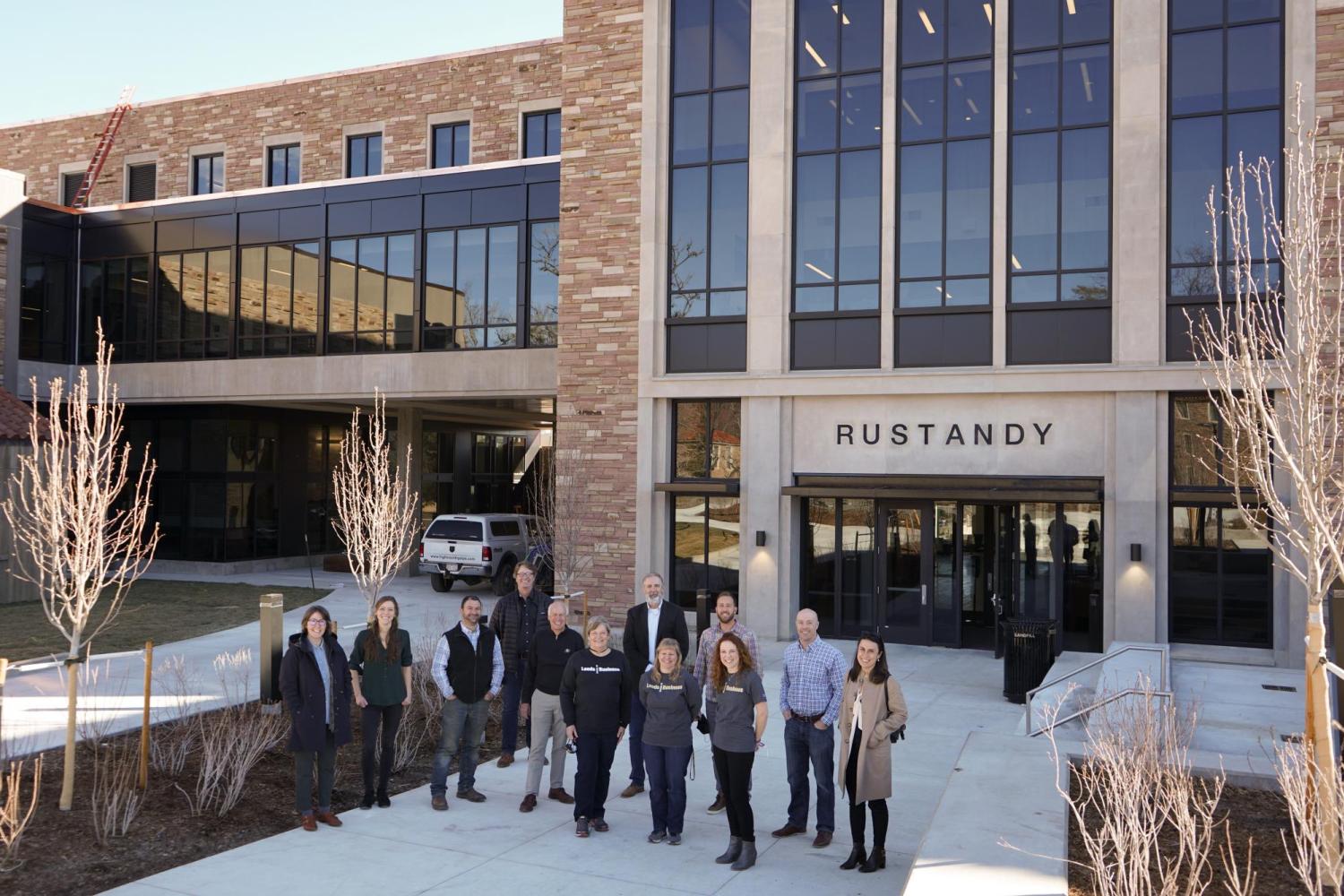 Doug (fifth from left) and other VIPs outside the newly opened Rustandy Building.

From Emina Begovic, assistant vice provost for academic resource management, who collaborated with Smith on renovations in the SEEC and SEEL buildings on East Campus

I have worked extensively with Doug over the course of the last few years and I have to say Doug is a truly excellent partner when it comes to difficult negotiations and finding solutions to complex problems. Doug is a fierce advocate for engineering, but deeply understands the value of compromise and trust. One of his great strengths is in maintaining excellent working relationships across campus. I enjoy working through difficult problems with Doug because I always learn something new from his flexible and creative approach.

From Rory Korpela, senior director of budget and finance for the College of Engineering and Applied Science

My time with Doug has shown him to be a man of great consistency. From his early morning workouts to his one cup of coffee in the morning to the lunch he brings every day, he is a man of habit. More important, though, are the ways he always comes through for his colleagues and the college. He consistently brings his best to work and accepts nothing less of himself in his endeavors. He’s generous with his time with colleagues and friends as Doug is always willing to get a cup of coffee, talk, and provide invaluable advice and thoughts on whatever the topic. Doug is only ever a phone call or text message away, even on his days off. It’s said, show me where you put your time, talents, and treasures and I’ll show you what you care about. From the time, energy, and application of talents that Doug brings each day, it’s clear that Doug cares deeply about the college. Further, I think I can safely say that we all care deeply about him.  The college will never be pari passu or "six, two threes"* without him.

Prior to joining the college, Doug Smith served as president of the engineering and architectural services group at Tetra Tech from 2005 to 2012, guiding the company back from a multimillion-dollar loss after the financial crisis. Before that, he worked for 25 years as the president of Black & Veatch’s outside U.S. water business, managing construction projects on nearly every continent. In addition to his master’s from CU Boulder, he holds a BS in civil engineering from Kansas State University and a law degree from the University of Denver.