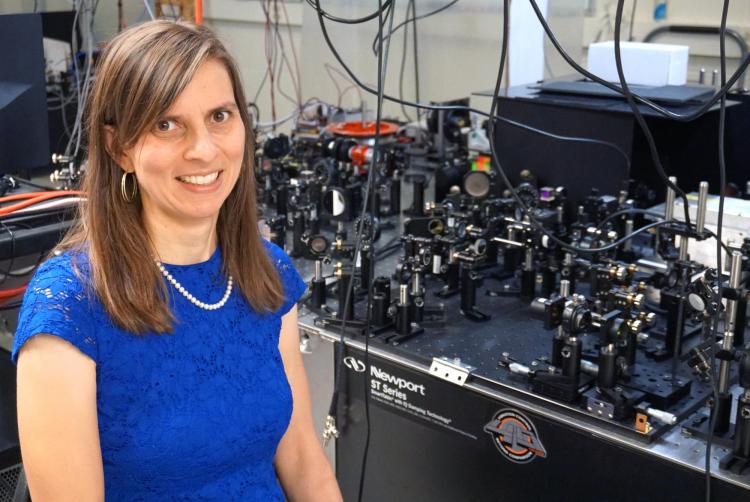 While the CUbit Quantum Initiative is only five months old, Associate Director Juliet Gopinath said she has been energized by the potential of the cross-campus project.

“This has just been a fantastic opportunity to get the campus working together,” said Gopinath who is also an associate professor in the Electrical, Computer and Energy Engineering Department in the College of Engineering and Applied Science. “It has been amazing watching the barriers come down between different groups and seeing the dialogue start. It’s really a special thing for CU Boulder.”

The university announced the establishment of CUbit in January as a response to the National Quantum Initiative Act. That act positions quantum information science and technology at the top of the countries’ science agenda by authorizing $1.2 billion over 10 years for quantum science research and education centers. The initiative is a partnership between the CU Boulder Research & Innovation Office, the College of Engineering and Applied Science, the College of Arts and Sciences, JILA and the National Institute of Standards and Technology (NIST) to support work in the field here and answer the national call.

“Juliet is bringing together engineering and science to help reinforce CU Boulder as a major hub in quantum,” said Vice Chancellor for Research & Innovation Terri Fiez. “The CUbit Quantum Initiative underscores the collaboration between our engineers and scientists that is so critical in translating fundamental quantum discoveries into transformative applications.”

Gopinath said engineering’s role in the collaboration is to come up with scientifically interesting devices that can help make quantum systems practical – something that would be a great utility to the public when it comes to sensing, networking and computing.

Gopinath has been with the college since 2009 and earned her PhD in electrical engineering from the Massachusetts Institute of Technology in 2005. She previously led a collaborative quantum research effort in the college as well, making her a valuable connection between departments at the college, university level partners and outside institutions.

Gopinath is currently part of two collaborative seed grants that were awarded through the initiative to foster work and partnerships. One of the awards funds work looking at ways to make entangled frequency combs in a compact and tunable manner while the other focuses on generating truly random numbers on a small form factor.

She is also researching quantum related questions outside of the initiative. She is the PI on a $1 million multi-university and multi-disciplinary project from the National Science Foundation aimed at fostering collaboration in quantum research. The proposal is built around the new ability to share information through photonic integrated circuits which encode information on light, rather than electricity. It specifically looks to create a single photonic integrated circuit chip for quantum information processing. Such a chip would allow secure quantum networking and quantum computing, replacing the binary zeros and ones of conventional computing with multivariable quantum bits. This change would allow for much more secure communications and computation than current state-of-the-art. The practical applications include significantly improved data encryption for personal privacy.

Gopinath said her goal with the campus initiative is to build an enduring and exciting partnership between scientists and engineers at CU Boulder.

“Seeing and understanding what has been holding us back so far, building those connections on campus and also understanding the fundamentally different questions we are all asking has been valuable,” she said.