The University of Colorado Boulder today announced the establishment of the CUbit (pronounced Q-bit) Quantum Initiative, a cross-campus initiative for quantum science and technology. In an early boost for the initiative, the Research & Innovation Office (RIO) also announced the awarding of $780,000 in quantum seed grants, as well as plans within the College of Arts and Sciences and the College of Engineering and Applied Science to significantly expand faculty capacity in quantum science and engineering. 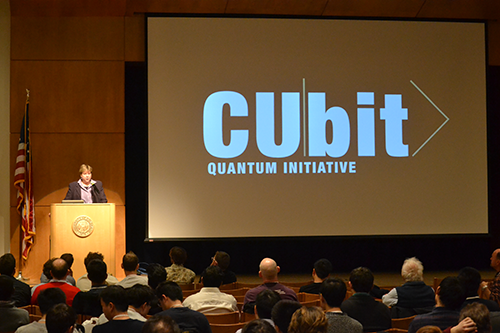 The investment signals the U.S. entry into this rapidly emerging field just as national and global communities are poised to pursue the enormous scientific and commercial potential of quantum science and technology.

“Quantum science and engineering will be a driving force for future economic development for the U.S. and the world,” said Terri Fiez, vice chancellor for research & innovation. “With CU Boulder’s exceptional history of accomplishment in quantum, including four quantum-based Nobel Prizes, CUbit and investments like the seed grants, faculty hires and the incredible ecosystem of national labs, corporations and startup companies, our region will have even greater impact on our nation’s economic and security future.” 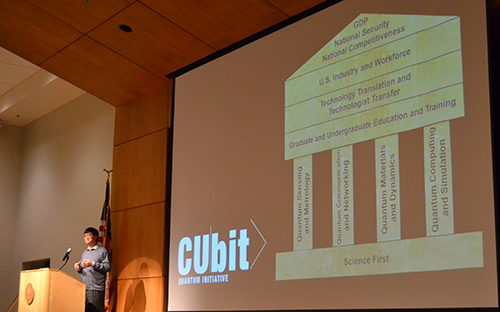 CUbit Director Jun Ye, professor adjoint of physics and fellow of JILA and NIST, believes the initiative’s timing is ideal for the nation. "We are tremendously excited to explore new frontiers in quantum science and develop innovative quantum technologies that will fuel future national economic development and international leadership,” Ye said. “CUbit will train the next generations of CU Boulder scientists and engineers to lead the emerging quantum revolution."

About the CUbit Quantum Initiative

A collaboration between CU Boulder, the NIST Quantum Physics Division (the NIST portion of JILA) and quantum-related industry partners concentrated along the Front Range, CUbit forms a foundation for Boulder, regional and national quantum efforts engaging universities, industry and government.

CUbit is founded on four technology pillars, each led jointly by scientists and engineers and each targeting ambitious advances. The pillars are: Quantum Sensing and Metrology; Quantum Networks and Communications; Quantum Matter and Dynamics; and Quantum Computing and Simulation.

In October 2018—in anticipation of CUbit—the Research & Innovation Office, the College of Engineering and Applied Science, the College of Arts and Sciences, JILA and NIST announced the Quantum Explorations in Science and Technology (QuEST) seed grant program.

Targeting interdisciplinary, multi-institutional research projects focused on quantum science and technology challenges with transformative potential, the seed grants were designed to position awardees to compete for current and future funding opportunities through the National Quantum Initiative Act and other federal solicitations.

“When we announced this seed grant opportunity, we believed the potential for highly innovative inter-department, inter-college collaborations in quantum information science and technology was substantial,” said ONeil. “That was the case, even beyond our initial hopes, and we funded 19 collaborative quantum projects for a total of $780,000, about half of which have already begun to take advantage of national funding solicitations.”