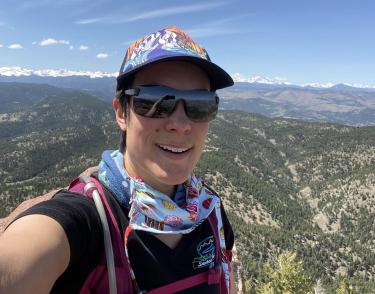 Above: Chang takes a selfie during a hike. Top: At work in her lab.

It’s a memorable scene in the movie Apollo 13: The NASA ground crew dumps a box of random items onto a table to brainstorm how the flight crew can use them to fix the C02 scrubbers on the incapacitated spacecraft.

“I saw that scene and I was like, ‘That is what I want to do. And I want to do it at NASA, and I don't know what that means I need to study in college, but I'm going to do it,’” she said. “I wanted to solve big, crazy problems for space.”

Chang recently received a Draper Fellowship, which supports graduate students working in engineering and the sciences. Through the fellowship, she will work closely with a mentor at the nonprofit lab and have access to their facilities in Cambridge, Massachusetts, once such in-person opportunities are possible.

She’s excited that the fellowship will allow her to focus more time on her research, which certainly qualifies as one of those “big, crazy problems for space.”

Chang and her advisor, Assistant Professor Brad Hayes, are researching how robots and humans can more effectively work in teams. It’s something that has immediate applications in places like Amazon warehouses, but also has application for future space exploration, where the two would need to work together in close quarters.

“I've been working on a project that uses augmented reality to facilitate negotiations between humans and robots,” which currently are kept separate in places like warehouses, she said. “We envision that there's a way for humans and robots to work together more closely, but in order to do that, they need to be able to negotiate for (physical) space ownership.”

An advocate for inclusivity

Chang’s decision to pursue a PhD wasn’t just motivated by her research interests. She is also passionate about higher education, especially diversity and inclusivity in STEM.

After earning her bachelor’s degree in mechanical engineering and pursuing her aerospace dreams through jobs at Boeing and Johnson Space Center, Chang decided to return to school for a master’s in STEM education. She taught at a pre-K through ninth-grade school before taking a job with Boise State University’s Institute for STEM and Diversity Initiatives.

While at Boise State, she helped start an all-girls high school robotics team. Her experience with the team – and as a biracial, female engineer herself – cemented her interest in supporting inclusivity in engineering and higher education.

“Having started the robotics team, it was even more obvious how little representation of women there was in the field,” she said. “I wanted to be part of that change, so that's what guided me towards computer science.”

This year, Chang will serve as one of the lead teaching assistants in computer science, where she will focus on professional development for her fellow graduate students. One of her projects is curating resources to help her colleagues develop anti-racist pedagogies.

“What I want to do is put together a more intentional collection of resources specifically for people in computer science and engineering to figure out ways to make their curriculum and their syllabus more inclusive,” she said.

Chang said the project is motivated both by her personal experiences with microaggressions and by seeing how much striving for inclusivity can benefit all students.

“When I was teaching in junior high, I had a student who had certain learning differences that they needed accommodations for in the classroom that I may not have otherwise provided. So I altered assignments, but I altered them for everybody to make them more accessible,” she said. “And it was just obvious that everyone appreciated it. It wasn't just the person who needed that accommodation. It was good for everybody.”