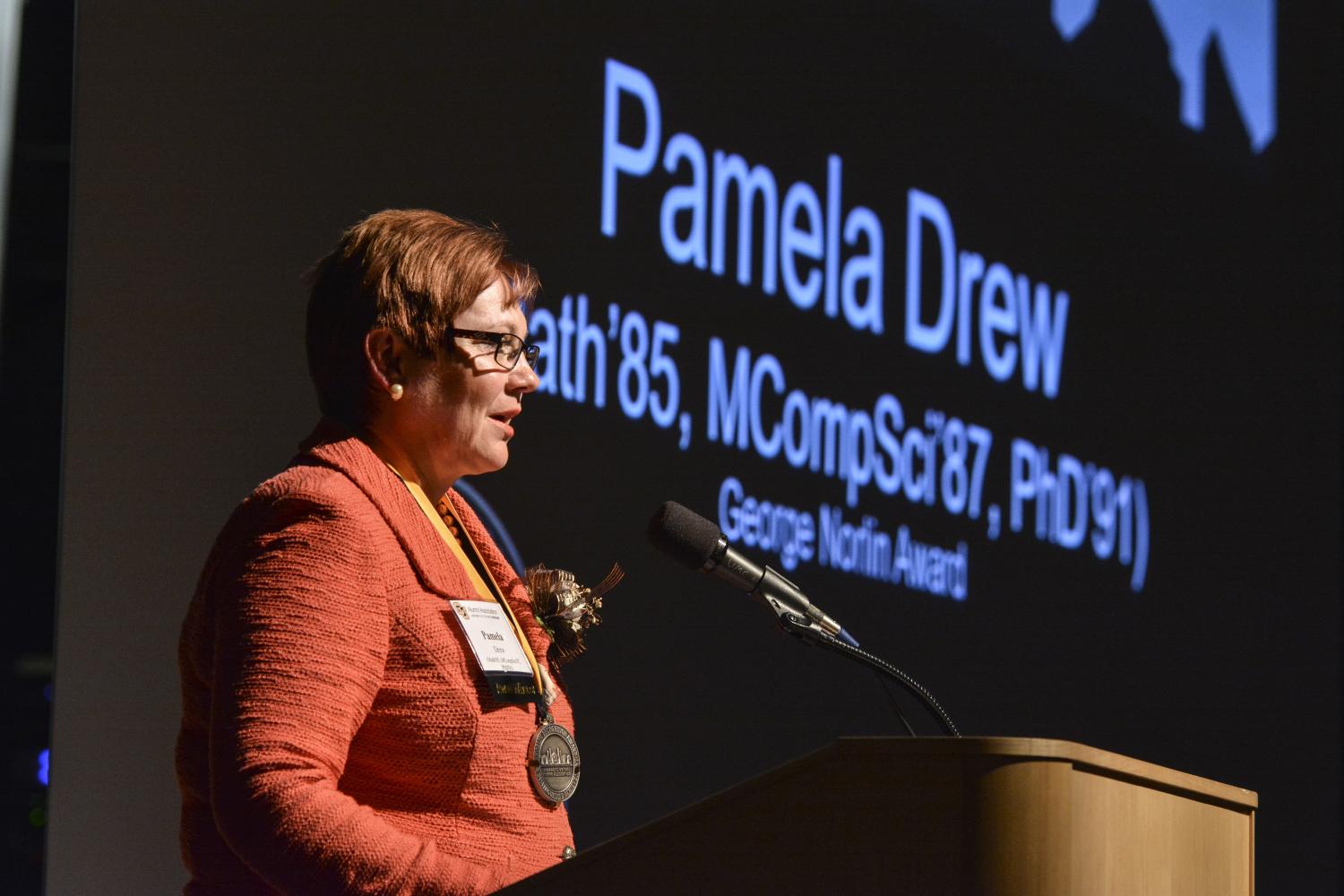 Pamela Drew has a master's and a doctorate in computer science, but she came very close to being a different kind of doctor altogether.

Drew was pursuing a pre-medicine degree in math and biology at CU-Boulder when she decided to take a computer science class during her junior year. From then on, she was hooked.

“I really enjoyed the idea of being able to use the computer as a tool to solve problems to help improve people’s lives,” she said. “I was never into computers as an end unto themselves.”

Drew recently received the Alumni Association’s Norlin Award for her distinguished career in information technology for aerospace and defense companies, as well as her ongoing commitment to CU-Boulder through service on several advisory councils.

Drew’s family originally moved to Colorado because her father worked in aerospace, and she said the space program is “in her blood.” After spending four years as a founding professor of the Hong Kong University of Science and Technology, she decided to return to the United States and find a job in industry.

Boeing was one of the companies that caught her eye because of their aerospace connection. When she didn’t find the kind of position she was looking for, Drew went out on a limb and created it herself.

“I wrote them a letter saying that they needed a team looking at how they managed data and that I could lead it,” she remembers. “Next thing I knew, I got a phone call saying, ‘You’re right! Come interview.’”

Since then, she’s risen through the ranks at companies including Boeing, Northrup Grumman and Exelis, where she’s currently executive vice president and president of information systems.

Getting Started in Computer Science

While her family was an early adopter of computers – she’s had one in her home since she was 12 or 13 – she didn’t have any programming experience when she took her first CS course.

“At the beginning, it took me a while to figure out that the computer does exactly what you tell it to do, not what you’re thinking,” she said.

“Don’t be intimidated. You’ll be surprised at how well you do,” she said. “Sometimes you have to brute force your way through it, but it’s weird – there’s always this ‘click’ moment.”

About 10 years ago, the College of Engineering and Applied Science reached out to Drew to see if she would be interested in serving on the Engineering Advisory Council (EAC). While she initially hesitated because work and family were keeping her plenty busy, she decided to volunteer.

“By that point, I started to see that I could be serving as a role model,” she said. “It’s just awesome to see how far the college has come since then.”

She said she has enjoyed seeing the college grow in stature and the quality of its students, adding that she especially enjoys the student presentations during EAC meetings. She has also gotten involved with the university’s Grand Challenge initiative in order to provide her industry perspective.

Drew strongly encourages alumni to get involved, both with the university and with the college or their major department.

“The college is not the college 10-15 years ago,” she said. “The national ranking is very high, but we need alumni to be advocates of the school. The more positive comments people hear, the better for our reputation and students.”