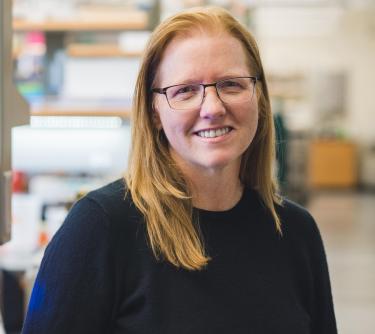 Kristi Anseth and her research group pioneer the development of biomaterials to serve as synthetic extracellular matrix (ECM) analogs that capture key features of the biochemical and biophysical aspects of a cell’s niche – an environment that is not only tissue specific, but can be strikingly heterogeneous and dynamic. Unique to her approach is the ability to create cell-laden matrices in three-dimensional space in which the matrix properties can be changed on demand – so-called 4D biology. Ultimately, Dr. Anseth and her group seek to understand how cells sense, store, and exchange information with the ECM and then use this knowledge to engineer biomaterial niches as cell delivery vehicles for tissue regeneration, in vitro models of disease, and physiologically-relevant models for drug discovery and screening. Her materials-first approach provides tools to perform unique cell biology experiments and address major hurdles in regenerative medicine.

Anseth's recent progress includes innovations in both photochemical and bio-click reactions to manipulate biomaterial properties in space and time, along with lithographic processes and confocal microscopy to perform these reactions in real time and in cell-laden matrices. She pursues application of these bioscaffolds to: (i) elucidate how specific extracellular signals influence stem cell differentiation, (ii) promote and mimic cell-cell interactions and to protect transplanted cells from the immune response via bioactive interfaces, and (iii) understand the fibroblast-to-myofibroblast transition in fibrosis, with an emphasis on the role of mechanotransduction.