Members of the Boulder Alt. Protein Project are the recipients of two awards for their research and community impact in the field of cellular agriculture, which may one day revolutionize how meat is produced for human consumption.

Mia Keyser of the Bryant and Whitehead groups was the recipient of the New Harvest Fellowship Grant for her PhD proposal, while Varsha Rao of the Anseth Group earned the New Harvest Dissertation Award for her research into the application of material systems she developed to better understand how three-dimensional culture environments can influence stem cell differentiation.

From childhood questions to professional research 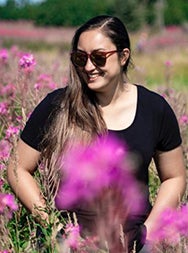 Keyser served as the Research Chair of the Boulder Alt. Protein Project this past year. Her proposal examines the engineering growth factors for improved biosynthetic media formulations.

“My passion for the intersection of food and biotechnology was ignited because of a honeycrisp apple,” Keyser said. “It was so new to me and I had to figure out how a new apple could just exist. I took to the internet for an answer and learned about cross-pollination. Passion and curiosity sustained my internet exploration into biotechnology for years, one discovery leading to another, from hybrids to transgenic organisms to genetic engineering to synthetic biology to tissue engineering.”

Growing up in Alaska, fishing was a commonplace activity for a lot of families, including Keyser’s. She recalls one instance where she processed over 60 fish in a single day.

“It was an eye-opening moment, defining the realities of meat consumption—was there a way to consume meat without killing animals?” Keyser said.

“It just so happened that sometime later, my passion project of researching biotechnologies led to an article about Dr. Mark Post debuting the world’s first lab-grown hamburger in 2013. I knew without a doubt that I wanted to do the same when I grew up. I have followed the development of the cellular agriculture field ever since.”

The moral and environmental case for cellular agriculture 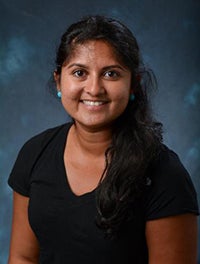 Rao hopes to use porous hydrogel scaffolds that can push cells to become fat tissue and reduce the biochemical cues required to elicit desired cell differentiation.

She sees cellular agriculture—growing meat in a lab—as much more than just an engineering challenge.

“The current system of producing meat from the slaughter of animals uses too much land, water and feed to be able to sustainably scale up to meet consumer demand while still maintaining biodiversity and healthy ecosystems,” Rao said.

“Not to mention the human health risk that conventional animal agriculture poses by contributing to increased antibiotic resistance, the spread of zoonotic diseases and cases of foodborne illnesses.”

Rao believes that using reactors to produce synthetic meat may significantly reduce these land and water demands in traditional agricultural practices. Reducing livestock populations as the market adjusts to lab-grown meat could also mean a dramatic reduction in carbon dioxide and methane emissions.

“On a more personal level, I feel really excited about using my chemical and tissue engineering background to make an impact in a burgeoning field that aligns with my values,” Rao said.

A hub of innovation

CU Boulder, Keyser and Rao say, is uniquely positioned to become a hub for this emerging field. The students are passionate about the ethical and environmental issues surrounding meat production, and the faculty possess the technical expertise necessary to develop the technologies for perfecting and scaling up cellular agriculture. The Boulder area also has a strong entrepreneurial-research community alongside established food technology and emerging alternative protein companies.

Get Involved
The Boulder Alt. Protein Project connects students with faculty and industry representatives who are exploring the possibilities of alternative protein. The group holds multiple events throughout the academic year. Students are encouraged to contact Keyser and Rao for more information.

Broader, national challenges remain, however. Rao points out that public funding of traditional agricultural research and practices far outweighs the nonprofit sector’s investment in cellular agriculture. The industrial challenges also include a variety of technical issues that have to be resolved.

“While a lot of technologies can be borrowed or repurposed from the cell therapy or regenerative medicine companies, these fields do not operate at the same scale or profit margins that cultivated meat would eventually need to reach,” Rao said. “The major challenges include creating cheaper cell culture media formulations, developing cell lines from various animals that are highly proliferative, robust and can reproducibly differentiate into the appropriate tissue types, and to develop sustainable and scalable scaffolding to make whole cuts of meat.”

“I envision products that go beyond what controlled animal husbandry can produce,” Rao said. “We can have hamburgers that have greater nutritional value, perhaps with vitamins or only good fats that won’t increase cholesterol.”

Keyser and Rao will use the awards’ financial resources to fund their own research and attend professional development and networking events.