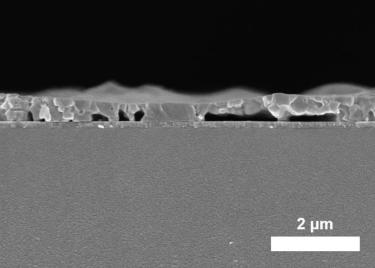 While solar panels have traditionally used silicon-based cells, researchers are increasingly looking to perovskite-based solar cells to create panels that are more efficient, less expensive to produce and can be manufactured at the scale needed to power the world.

Perovskite materials have properties that indicate they may be well-suited for energy applications like batteries and solar cells. They are synthetically “grown” in films for such applications. One of the fundamental questions related to their production, however, is whether they can be grown from the top down or bottom up. Each has significant impacts on how the films function.

In “Crystallization in One-step Solution Deposition of Perovskite Films: Upward or Downward?” published in Science Advances in January, Professor Michael F. Toney and his research partners describe a process of top-down growth, leading to a broader understanding of how to produce cells that are more efficient and stable while being less expensive than traditional silicon-based cells.

“The potential exists for the perovskite family to supplant silicon as the primary material involved in solar energy production,” Toney said. “We’re attempting to understand how to make good, quality films for perovskite solar cells. But it was unclear whether starting at the top and going down or starting at the bottom and going up was the best method.”

Toney credits his collaborator on this project Professor Jinsong Huang of the University of North Carolina at Chapel Hill as one of the key researchers behind this effort. This collaboration was made possible from the Department of Energy-funded Center for Hybrid Organic Inorganic Semiconductors for Energy (CHOISE).

Perovskite solar cells are on the way to commercialization after tremendous demonstration of excellent efficiencies and stabilities, Huang said.

“One critical question to be answered next is whether the lab-scale, nail-sized cells can be scaled up to one-to-two-square-meter modules while still keeping their efficiency and stability,” he said. “To answer this, the critical step to take is to understand how perovskite films are grown so that its uniformity can be well controlled, which results in better module efficiency and stability.”

Huang believes this research will help engineers refine the process to increase efficiency and drive down costs of perovskite modules.

Toney’s interest in the subject began about a decade ago, over lunch with CU Boulder Professor Michael McGehee. McGehee convinced Toney to investigate the perovskite class of materials as a possible replacement for silicon in solar cell production.

Toney describes the study of compound metal halide perovskites as being in its infancy, as opposed to silicon, which has been under study and in use for decades.

“For metal halide perovskite, the properties are quite different from silicon, so at a high level we’re trying to understand, what are these properties?” Toney said. “We’re learning more about the constituent atoms and molecules that control those properties. We’re asking: how do we tune the properties to create something that is useful for society?”

This research was completed in collaboration with researchers at CU Boulder, the National Renewable Energy Laboratory, the Department of Energy’s CHOISE program and at Stanford University.