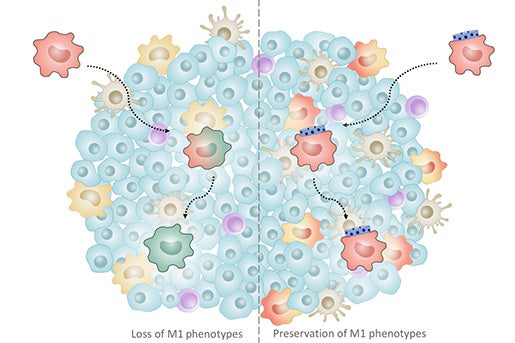 A comparison illustration of macrophages with and without the particle "backpacks."

A new form of cellular immunotherapy may help in the fight against cancer, drawing inspiration from a simple concept familiar to students everywhere: donning a backpack.

Macrophages are white blood cells that deploy in response to the spread of cancer. But when they start interacting with tumors, problems can develop. In some cases, tumors provide stimuli that co-opt macrophages to assist in the cancer-spreading process.

These specially engineered particles attach to the macrophages and resist cellular phagocytosis—meaning they avoid absorption—for several days and continually provide positive stimuli to their macrophages by releasing signal-carrying proteins called cytokines. These cytokines keep the white blood cells on-mission—and keep them from joining the enemy.

“The idea for the backpacks came from a discovery in Harvard Researcher Samir Mitragotri's lab almost 15 years ago,” Shields said. “Julie Champion of Georgia Tech discovered that some particles evaded cellular phagocytosis if they were disc-shaped. Ever since, backpacks have been used in a variety of contexts to deliver cytotoxic drugs. When I joined Professor Mitragotri's group as a postdoc in 2018, we asked the question: what if the cells were the therapeutic agents and the backpacks were used as a tool to direct their phenotypes in vivo?”

Shields and the research team wanted to test the strength of those backpack particles in an environment that is typically hostile to the immune system response: that of triple-negative breast cancer, an especially obstinate version of the disease that does not respond to many traditional medications. 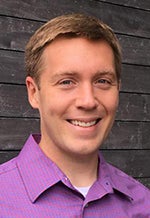 They discovered their method worked, even within that hostile context, opening the possibility for wider applications of the “backpack” particle immunotherapy.

“While we initially studied breast cancer, we believe this technology could be used for other solid tumors,” Shields said. “Additionally, by virtue of the wide range of phenotypes that macrophages can access, backpacks may eventually find their way to target some autoimmune disorders.” Such applications are potential in nature and years away, but the research is promising.

“The grand challenge for many is to think about how to apply fundamental discoveries at the bench to enable breakthroughs at the bedside,” he said. “This is what drew me to the Department of Chemical and Biological Engineering at CU Boulder. The faculty is composed of experts in fields that span from catalysis and soft matter physics to cancer therapeutics and regenerative medicine.”

Transitioning from his post-doctoral fellowship at Harvard to helming his own research group here at CU provides a new set of opportunities to take this research further.

“My group at CU focuses on engineering new types of particles that interact with biology for diagnosis and immunotherapy,” he said. “We love particles that are weird—particles that change shape, self-propel or harvest energy from an external source to create a unique therapeutic effect. We love exploring new phenomena, but we are always thinking of ways to apply what we have learned to address new challenges in medicine.”