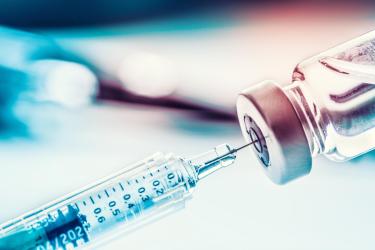 New research from Professor Robert Garcea of the BioFrontiers Institute and Gillespie Professor Theodore Randolph of the Department of Chemical and Biological Engineering is showing encouraging results in stabilizing vaccines and circumventing the refrigeration requirement, earning an additional $1.2 million in grant funding from the Bill and Melinda Gates Foundation.

Melvin E. and Virginia M. Clark Professor Al Weimer developed a critical piece of the technology that helped make these breakthroughs a reality. Combining an extension of Weimer’s particle atomic layer deposition with thermostabilization techniques developed by Randolph and vaccine antigens discovered by Garcea enabled the researchers to create new vaccine formulations. They first created small particles of thermally-stabilized vaccines, then coated them with nanoscopic layers of metal salts to enhance the body’s immune response to the vaccine.

“Our single dose is providing a more effective treatment than multiple doses of a conventional vaccine,” Randolph said.

“Randolph had developed a method of thermal stabilizing proteins,” Garcea said. “We thought that would be good to apply to vaccines because you run into problems keeping them refrigerated and delivering them in developing countries.”

Many vaccines are given in series, requiring multiple shots over a period of time. This can be a major problem when working with populations far from the vaccine supply chain, or when patients rarely see medical professionals.

“It’s hard enough to get Americans to come back for a second dose of a vaccine,” Randolph said. “If you’re in a developing country where you can see a physician only once every two or three years, combining everything in a single dose is really advantageous.”

“We tried Weimer’s technology on the thermal-stabilized vaccine preparations and that enabled us to coat them with alum and get timed release,” Garcea said. “The combination of the two technologies of thermal stabilization and atomic layer deposition enables the delivery of a prime and a boost with a single shot.”

Current vaccines require storage at carefully controlled temperatures that may be as low as minus 60 degrees Celsius. The current formulation of Randolph and Garcea’s human papillomavirus vaccine has been tested at over 50 degrees Celsius and remained stable for months on end, demonstrating its potential for deployment to regions lacking proper cold chains, including domestic and overseas locations.

“Ultimately, the thermostable single dose vaccine will provide for an incredible health benefit to people throughout the world in remote locations who otherwise would not have this opportunity,” said Weimer. “The technology is certainly applicable to other drug delivery carriers beyond vaccines.”

By freeing vaccine deployment from rigid cold chain and multiple-dose requirements, this technology is opening up new potential applications.

Randolph added that the technology has been applied to a number of vaccines for the biodefense and bioterrorism space.

“We worked on stabilizing vaccine formulations for anthrax, ricin, botulinum toxin and now the Ebola virus. With bioterrorism vaccines, it is very critical to have this thermal stability characteristic,” he said. “If we did have an unfortunate event of a bioterrorism attack we would need to vaccinate a lot of people in a very short period of time. That implies that we have to make the vaccines and then store them, and if they have to be stored at minus 50 degrees centigrade, that’s just completely impractical. We’re hoping we can make these kinds of vaccines and store them at room temperature for 10 years at a time.”

Garcea speculates that single-shot formulations will greatly aid in the prevention of many diseases around the world.

Randolph and Garcea are using this latest Gates Foundation grant to prepare the technology for human clinical trials within the next two years. While they are focusing on a HPV formulation, they see their technology as a platform that can be customized to battle a wide variety of diseases.

“One of the very interesting things about this ultrastable vaccine is that it becomes easier to make combinations,” Randolph said. “There’s a motivation to make combined vaccines to address multiple diseases at the same time. That’s often challenging because the conditions you use to store one vaccine might not work for the next one. But by putting things in separately coated microparticles, we can mix different vaccines without them interfering with each other in a single dose. This might speed up the development of combination vaccines.”