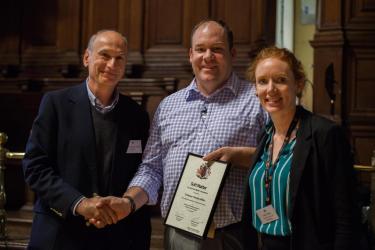 White presented the 2019 Soft Matter Lecture, an opportunity given to an early-career researcher in the soft materials field as recognition for their achievements.

“I had a wonderful time in Edinburgh and enjoyed attending the conference in such a historic location,” White said. “This recognition really is a credit to the researchers I have had the pleasure to work with, both in my time at the University of Colorado Boulder as well as in my 10 years at the Air Force Research Laboratory.”

Before the lecture, Soft Matter Associate Editor Professor Dimitris Vlassopoulos and Deputy Editor Laura Fisher presented White with the 2019 Soft Matter Lectureship Award. The Soft Matter editorial board selected White as this year’s award recipient from a pool of candidates nominated by the research community.

“It was humbling to be selected for this award,” White said. “The journal Soft Matter has been a leading destination to publish functional materials research. It is an honor that they selected me to represent them in this lectureship.”

“One fun research outcome from our recent work is the use of light to transform a flat sheet of rubber into a piece of origami,” White said. “We also are working diligently to use liquid crystals as reflective electrochromic devices, similar to what are used in the Boeing 787 Dreamliner windows. Potential applications of our research include defense and homeland security, energy and in the health sciences.”

After learning of the award, White mentioned the conference trip to his father, who wanted to conduct a different kind of research.

“He had been talking about going to Europe to pursue his own love of research in tracing our family genealogy,” White said. “I offhandedly invited him to join me on the trip, and he took me up on it. He was able to attend the lecture and the journal was kind enough to allow him to join the dinner reception. It isn’t often that family gets to peek behind the curtain of scientific conferences, and I was glad to share this trip with him.”