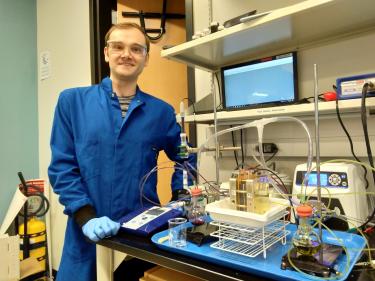 Graduate student Brian Robb sees big potential for renewable energy. But a mass-scale adoption of energy sources like wind and solar is limited by our current technology.  By studying and developing new chemical applications in energy storage in flow batteries, Robb hopes to change that — and his research has earned him a National Science Foundation Graduate Research Fellowship grant.

“These batteries store energy in liquid form using large tanks, which can give flow batteries an economic advantage at large scales compared with other batteries,” Robb said. “My research involves investigating new liquid battery materials called electrolytes that can improve the cost and performance metrics of the battery. In particular, I am investigating how organic materials called chelates can be combined with metal ions to improve battery efficiency and voltage.”

This line of inquiry has occupied Robb since January 2018, when he started working in the Marshak Lab at the Department of Chemistry. The research will likely carry him through to the completion of his PhD — at least another three years.

But Robb’s interest in renewable energy goes much further back.

“I've been very interested in the environment and renewable energy for as long as I can remember,” Robb said. “I grew up participating in trash clean-ups and tree plantings, so I've always wanted to pursue a career that was environmentally focused.”

That interest in the environment translated into his academic pursuits.

“During my undergraduate studies I did some research on solar cells, which was interesting to me, but I could tell that the type of science behind solar cells wasn't really my passion,” Robb said. “However, it was when I came to graduate school and took Dr. Marshak's electrochemistry class, that I fell in love with electrochemistry. I talked to Dr. Marshak about joining his group and he talked to me about the flow battery research project that he wanted to pursue.

“I was immediately very interested in this project, as it combined hands-on chemistry with the engineering aspect of building a flow battery and getting the battery to work. I was also very interested in it because energy storage is one of the key things limiting widespread renewable energy adoption, so I knew if this project was successful, that it could have a very large impact on how renewable energy is used.”

The 2019 National Science Foundation Graduate Research Fellowship will provide Robb with $34,000 a year across three years, in addition to $12,000 provided to CU Boulder for his cost of education allowance.