Where Are They Now? The Blakney Family 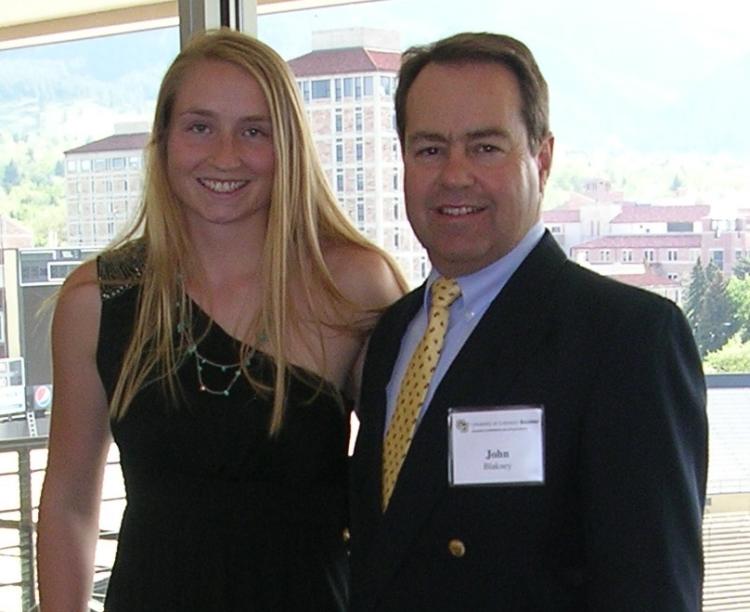 When the late John Blakney Jr. enrolled in CU-Boulder’s Chemical and Biological Engineering Department (ChBE) in 1950, he started a family tradition.

Both John III and Susan were encouraged by their father to come to CU.

“Dad loved it and it was a way for me to go where the skiing was better than New Jersey!” says John III. “Also, the fact that CU balances a very high quality education with so many fun outdoor activities really sets it apart. I have great memories of walking across campus on a sunny day after a snowstorm, concerts in Macky and Folsom, and eating at the Sink, formerly Herbies, during my dad’s visits.”

Similar memories are shared by Anna, who recounts tailgating for football games, leaving from campus to hike at Chautauqua and going to happy hours on the hill with friends.

Both Anna and John III are quick to share fond memories of their CU professors.

“I still laugh about the fact that my dad and I both had Clough as a professor,” says Anna, with John III adding, “Our computer for Process Controls was the size of a refrigerator and took floppy discs!”

Anna smiles as she recalls “Dr. deGrazia accidentally handing out the answer key during one of our tests and the look on Professor Falconer's face while telling our class about a really low average on a test that nobody finished.”

For John III, a favorite memory is when Professor Barrett, who had taught both John Jr. and John III, “commented at graduation that dad and I didn’t always make it to class when it was snowy!”

This proclivity for skiing was actually a boon to the department. “In my Senior Design class, Max Peters was a big skier and he heard that I had some racing background,” says John III. “He asked me in class to put together a team to race in the cross-discipline engineering challenge. We won, beating the Civils, a big deal for Max. We brought the trophy to class and put it on the table out front.”

Since leaving CU, the Blakney family members have gone in a myriad of directions. John Jr. worked for Chevron for 37 years, and John III followed in his footsteps, working for Chevron for 11 years and then at CH2M Hill for 21 years, currently as the Vice President and Director of Asset Management / Project Delivery.  He also currently serves on the ChBE External Advisory Board. “People have helped me in my life and it made a difference,” he says. “I also firmly believe that giving returns more than you give in many ways.”

Susan stayed in the mountains, building a gardening business in Roaring Fork Valley and working as a Ski Instructor at Aspen. She also served as the Aspen Valley Ski Club Racing Director for almost a decade.

Anna is currently pursuing a Ph.D in Bioengineering at the University of Washington. “I left CU with an excellent engineering education that prepared me very well for graduate school,” she says. “My research mentor, Stephanie Bryant, went out of her way to offer me opportunities and groom me into an efficient and focused researcher.” Anna hopes to stay in academia and plans on pursing a tenure-track faculty position at a research university.

When asked what they took away from the CU engineering program, John III answers, “It’s more than technical prowess; you have to communicate and work with people. You also need to set goals and work towards them.”

Anna believes “there are two things that make ChBE really special for me: the work/life balance of professors and students alike and the fact that ChBE professors really care about their student's success and foster an environment based around support and learning.”

To students, John advises, “Learn to work in teams, work on communication skills and keep work/fun balance in your life.”

Adds Anna, “Find your niche and surround yourself with supportive people that want you to succeed.”