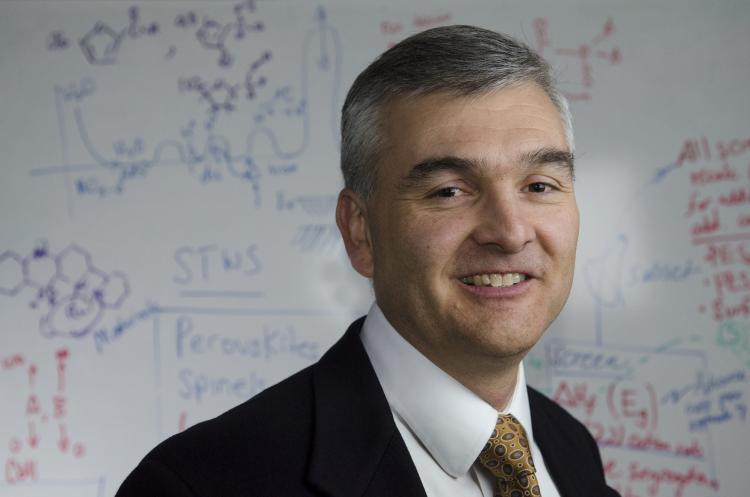 Biking down a steep mountain road on his way to work last August, ChBE Professor and Associate Chair Charles Musgrave collided with a truck on a sharp bend, breaking his neck, collarbone, and four ribs. The fact that he showed up to teach on the first day of classes three days after surgery surprised neither his colleagues nor his students.

“I was excited to get back to teaching and research,” he admits.

Musgrave is passionate about his work, in particular using quantum mechanics for renewable energy applications.

“I have always been fascinated by quantum mechanics,” he says. “It is one of the greatest scientific achievements of the 20thcentury and can be an incredibly valuable tool in uncovering detailed underlying molecular processes.”

Trained as a materials scientist, Musgrave has a strong background in chemistry and physics, which allows him to approach renewable energy challenges from a unique perspective.

“These are some of the most esoteric problems, both fundamentally and practically challenging,” says Musgrave. “Moreover, our solutions can have enormous impacts. With a molecular understanding of underlying processes, we work to computationally prototype and design new engineering solutions in a myriad of areas.”

Various methods have been suggested to decrease atmospheric carbon dioxide (CO2) levels, from sequestration to emission taxation. One approach with great potential is conversion of CO2 into fuels such as methanol or products such as polyethylene. Unfortunately, reducing CO2 is difficult due to its molecular stability.

“One very appealing method of reducing CO2 is through photoelectrochemical reactions,” says Musgrave. “Using sunlight as the energy source, a catalyst such as pyridine could be used to facilitate the reduction. We are employing quantum chemical calculations in the hopes of determining a kinetically viable CO2 reduction mechanism which we hope may be used to guide the catalyst community.”

Musgrave has also collaborated with ChBE Professor Al Weimer on the development of a new water splitting technique for hydrogen production that was recently published in Science. It has already been shown that concentrated sunlight can be used to heat a reactor containing metal oxides to temperatures in excess of 2,500°F and thereby release oxygen from the metal oxide. Subsequently adding steam at a lower temperature results in dissociating H2O to oxidize the metal oxide, producing hydrogen gas.

“The more conventional approaches require switching the reactor between oxidation and reduction,” says Musgrave. “A major innovation in our system is that there is no change in temperature, but instead we swing the pressure which greatly reduces thermal stresses on the system, idle times and radiation losses.”

Yet another area of interest for Musgrave is photovoltaics. Solar cells are currently beset by low efficiencies. Musgrave’s group is looking into the use of multi-exciton generation governed by singlet fission to dramatically increase efficiencies.

“Typically, solar cells only produce one exciton per photon,” explains Musgrave. “Using singlet fission, two triplets are created from one excited singlet state. Unfortunately, the underlying mechanism has remained elusive, hindering the rational design of improved photovoltaic materials.” Such a mechanism was proposed by his group in a paper published in Nature Chemistry.

Musgrave uses his quantum and renewable energy background in his classes as well. He created a Quantum Simulations course, and this spring is the first ChBE professor to teach a revamped Physical Chemistry for Engineers course. He also teaches Energy Fundamentals, an undergraduate ChBE course that examines the science and technology of energy.

“The goal is for students to gain a scientifically-based understanding of energy that will enable them to understand how to use their ChBE backgrounds to tackle some of these energy challenges,” says Musgrave.

“Professor Musgrave’s passion inspired us to think critically and holistically to evaluate and solve modern energy issues,” says former student Luke Arlow. “He challenged us all to pursue our interests and really be proactive learners.”