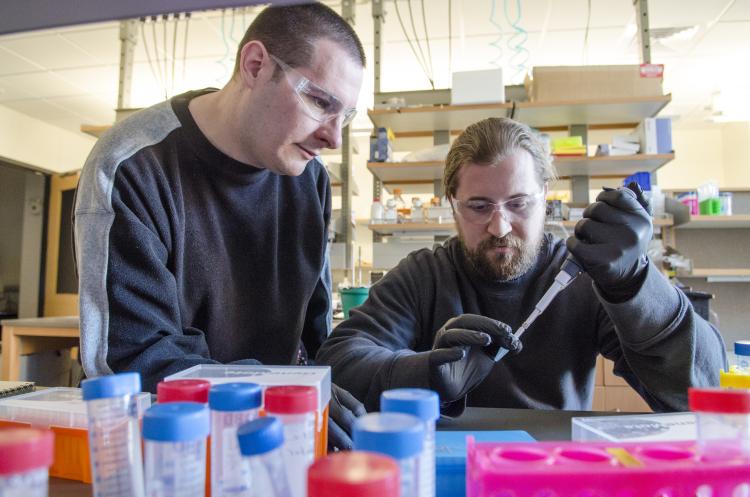 The CU-Boulder iGEM team had a goal of making synthetic biology more accessible and affordable. Surpassing their hopes, their project on new low-cost methods of enzyme purification won multiple honors at the iGEM North American Regional Competition in Toronto and qualified them for the top synthetic biology competition in the world.

iGEM, or Internationally Genetically Engineered Machine, is an international competition launched in 2003 wherein student teams are given a kit of biological parts such as promoters or specific genes. Using these parts as well as those of their own design, teams must create biological systems which operate in living cells.

“iGEM encourages high risk, high reward projects; documenting all of your results regardless of success; and freely sharing information,” says ChBE student Phil Jensen. “This is a good template for how science ought to be investigated.”

The CU-Boulder team of 15 students, which included ChBE undergraduates Jensen and Bill Heymann, created constructs and purification methods to isolate and produce the restriction enzyme EcoRI.

“As the project progressed, we realized that the existing protocols and documentation could be vastly improved,” says Heymann. “By the end we created restriction enzymes, protein purification systems, miniprep kits, and many new protocols.”

Both Heymann and Jensen put their ChBE education to practical use. “Applied data analysis and MATLAB proved to be very useful in designing experiments and analyzing the results,” says Heymann. “Taking ChBE courses, we absorb a lot of information about cell growth, chemistry, pH impact on various chemicals, etc. and those just become part of the knowledge you use when solving problems.”

Heymann believes his involvement with the iGEM project will help him as an engineer. “This project definitely taught me how to better problem solve. We had a huge issue with contaminating background colonies. Phil and I spent a lot of time designing experiments to isolate the problem, and eventually solved it by creating a DNA purification system. We learned to trust our instincts.”

Upon graduation, both Jensen and Heymann plan on working in industry, perhaps in synthetic biology or pharmaceuticals.

“iGEM was an awesome experience,” says Jensen. “It is a great opportunity for undergraduates to get in the lab and better understand how the emerging field of synthetic biology and the rapidly growing biotechnology industry really work.”