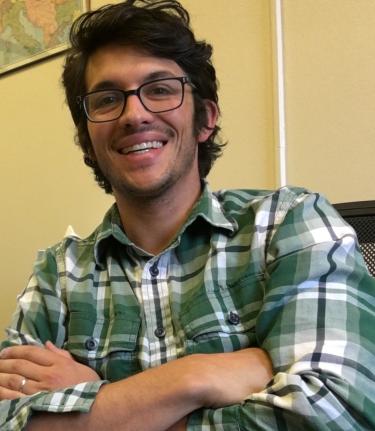 Zachary Kilpatrick has been an Assistant Professor in the department since 2016. He received his B.A. in Computational and Applied Mathematics, along with a B.A. in History, from Rice University. After obtaining his B.A., he received his masters, then PhD in Mathematics in 2010 from the University of Utah. Dr. Kilpatrick focuses on uncovering the mathematical and computational principles underlying human cognition. He uses techniques from nonlinear dynamics, stochastic dynamics, and probabilistic inference to develop computational models of decision making, working memory, and other cognitive abilities. Dr. Kilpatrick has received over a million dollars in grant money, has published over forty journal articles, and has given over fifty invited talks around the world. He has taught APPM 2360: Introduction to Differential Equations with Linear Algebra (coordinated the program as well), APPM 3570: Applied Probability, APPM 4350/5350: Fourier Series and Boundary Value Problems, and APPM 5470: Partial Differential and Integral Equations.

Q: What has been the most interesting or favorite thing you have learned in your work?

A: Finding anything surprising or unexpected is what I hope for when I start out with a problem. In any computational model or cognitive task I am thinking about, I hope there's some conclusion that people might not be expecting. One recent project that had some surprising features was related to what is called repetition bias. People do this all the time. If a decision worked yesterday, I may make that same decision today even if the evidence I see today is pointing me in the opposite direction. I was able to show, in a neural network model of decision making, that repetition bias can emerge from slow changes in the network structure that result from each decision. Realignments in the network build over multiple trials and carry information about past decisions. Not only does that give us intuition as to why people tend to repeat the same decision over and over, but it suggests a biological mechanism for how those biases build up in the brain.

Q: What interests you about decision making?

Q: What made you decide to do mathematics in graduate school instead of history?

A: My studies in history were a nice avocation. I still read history books in my spare time, and I think it is really helpful for being politically informed, but I always loved math since I was 4 or 5. My parents used to play math games with us at the dinner table or in the bathtub (“Bath Math”). I always thought it was something I was always good enough that I could make a living at it, but I didn't just want to do math for math’s sake. I had a really good mentor in college who let me do some research with him after my sophomore year. He gave me some books to read on the biochemical basis of long-term memory and the biochemical basis of that. I was never really that big on biology, but when I saw that there was a connection between math and biology, that excited me, and I continued working with him throughout college. He encouraged me to look at a couple of different math-biology PhD programs, and one of them ended up being the University of Utah.

Q: You've given a lot of talks around the world and here in the US. What has been your favorite?

A: We live in a world where there are a lot of artificial country boundaries, but science and math don't have to respect them. It's always really neat to go to a conference and meet somebody from Morocco or Vietnam or France or Italy and we've read the same papers and we're interested in the same topic. I can give a talk and then have in-depth conversation with people from around the world. Small workshops in foreign countries tend to be my favorite meetings, including ones I’ve attended in Banff, Marseille, Torino, and Göttingen.

Q: How does CU Boulder's Applied Math program stand out compared to other programs?

A: Our department is growing, becoming quite large for an applied math department, while staying true to its core focus areas. This allows us to be more diverse and in depth in our specialties like statistics and data science, nonlinear dynamics, physical applied math, and math biology.

A: When I say diversity, I mean both intellectual diversity (what research topic a person is interested in studying) and also ethnic, gender, and other types of diversity. We live in a diverse world, and the best applied mathematicians could come from any demographic group. If we don't have a diverse faculty, we will not be able to fully serve our students. Each faculty member has different life experiences, understandings, and ways to support our students. I know that there are experiences that I have not had because I am a white man, and while I work hard to empathize and provide support to every single student, there is a significant advantage of having faculty in our department from a variety of demographic groups so we can adequately serve our diverse student body.

Q: What has been your favorite class to lecture so far?

A: I've enjoyed teaching graduate students. I've taught the graduate Partial Differential Equations prelim class, and it was wonderful to teach to students who are really excited, interested, and strongly driven to learn the material because they know they may use it in their dissertation work. I have also enjoyed teaching the Fourier Series class because the undergraduates are at a level where they know that the material will be useful to them in their engineering courses, but they also get to apply the things we learn about in hands-on projects at the end of the semester.

Q: What is your favorite part of Boulder?

A: Well, of course the outdoors. The accessibility of the outdoors -- it's probably something cliche everybody says but it's really true. And though I often wish for the trails to not be crowded, it's nice to go out and see that there are so many people, adults and children, outside enjoying the nice weather and the awesome place we live in.

Q: What advice do you have to a student in the department?

A: There are a lot of ways to use a degree in applied mathematics. You don't just have to go to graduate school right away; you don't have to go into some STEM related industry; there are many disciplines that need good applied mathematicians. Find what you're passionate about, and if you're good at doing math, there is somebody somewhere willing to pay you to help them solve their problems!