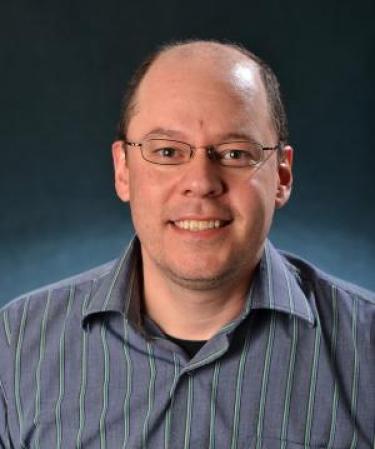 Dr. Manuel E. Lladser is a probabilist and mathematical computational biologist who joined the Department in 2004 as an instructor, but became an assistant professor in 2005. He was awarded tenure in 2012, and recently became an affiliate faculty in the Department of Computer Science. Professor Llader's research interests are "at the interface of applied and discrete probability and problems arising in computer science and computational biology, with an emphasis on discrete mathematics, analytic combinatorics, and asymptotic analysis."  Dr. Lladser has received or been associated with more than five million dollars in grant money and has given more than 60 individual talks and presentations. Furthermore, he has lectured APPM 1350 (Calculus I for Engineers), APPM 3170 (Discrete Applied Mathematics), APPM 3570 (Applied Probability), APPM 4560/5560 (Markov Processes, Queues and Monte Carlo Simulation), APPM 4565/5565 (Random Graphs), APPM 4570/5570 (Statistical Methods), APPM 5440 (Applied Analysis I), APPM 4720/5720 (Special Topics: Statistics and Computations for Genomes and Meta-Genomes), APPM 4720/5720 (Special Topics: Mathematical Computational Biology), and APPM 7400 (Foundations and Applications of Probability Theory).

Q: Could you describe your work in your own words?

Q: What has been your favorite moment in your line of work?

A: During and after my PhD studies, I was mostly following people, so building a research group seemed so far away in the future. In fact for many years, I had very few students – I had like one or two working with me, sometimes none – but then, all of a sudden, I realized one day that I had a sizeable research group of students looking up to me to guide them on a research topic. To me, that was a very important moment as a University professor!

Q: What makes you want to advise instead of just do research?

A: First of all, I am a very social person, so I enjoy the interaction with students. At the same time, the day only has 24 hours, so there are many things that I am interested in exploring, but do not have the time to fully explore myself. In many ways, having a student interested on a project is an extension of my own interests.

Q: You received your degree in Chile, but what made you want to come to the US?

A: Originally, I had no plans to go anywhere, but at some point, I felt that if I kept my degree as I earned it in Chile, I was very limited as to the things I could do in there. To me, the States was always the future: the place where things were happening – kind of like Star Wars technology. That was always very appealing to me and at a more personal level, the States was the only country where it was written in stone that all men and women are born equal. I felt that this country had the right vision to commit to it.

Q: What differences do you see between Chile and the United States?

A: Holistically, they are very different countries. In Chile, the sense of family feels stronger than in the states. Also, I miss Chilean bread – I feel Chilean bread is so much better than the one I can buy in the states, unless I am in places like New York that have top notch bakeries.

In terms of my profession, Chile has very competitive research groups. If you go to my former college, they are top notch in applied mathematics, and I think a lot of the skills that I have were brought to life to me in Chile; and yet, because USA is such a much larger country than Chile, it has offered a lot of topics for me to explore that I don’t think I could have explored in Chile.

Q: You’ve given and been a part of many talks and presentations. What has been your favorite?

A: My favorite presentation is when a student is presenting. I take a lot of care to help my students give good presentations. One day, those skills are going to be important for future job interviews and to show the relevance of what they’ve been doing. I love to see them talking about what they are doing and see them grow confidence that they have something personal to tell other people other than, “I take classes and get good grades!”

Q: How did you get involved with CU and the Applied Math Department?

A: I came to CU as an instructor and during my first year here, there was an opening for a probabilist. Since I was so green by then, I didn’t even think to apply. However, I was good friends with a secretary here who told me “Manuel, how come your application package is not in? It’s due in two days.” I said “Oh, I have no chance to get it. I just graduated, I’m not even a year into this position.” She responded “If you don’t run in the race, you can never win it!” That made me think, and then I decided to apply. It was over-rushed because I had almost no time to put it together. After several people were invited, I was the last one to interview and to my surprise, I made the best case! I became an assistant professor. I decided to go from an instructor, which is a temporary position, to an assistance professor here at CU because I really enjoyed the connections related to biology, specifically computational biology, that I was making.

Q: What class do you enjoy lecturing the most and why?

A: My all-time favorite class is Random Graphs, which I created about four years ago and I have given twice. There is no doubt that random graphs and networks are going to be part of the pedigree of any interdisciplinary applied mathematician.

At the undergraduate level, I love to teach probability because I was fortunate enough as an undergrad to have a great instructor in probability and that’s how I fell in love with it. I feel that probability is an ideal area for anybody that wants to know something about everything because you’re never encapsulated by the same types of problems.

A: I really love the book store, and have had really productive times just thinking at the Norlin Library. When I am around books, somehow, I feel very inspired.

Q: What makes you stand out as a faculty in this department?

A: I am the misfit: the guy whose research is very non-typical in the department, the guy that talks a lot more to scientists than to other mathematicians, and yet, tries to peruse a fundamental mathematical question.