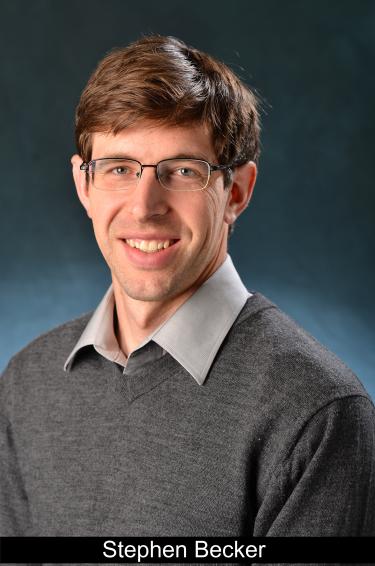 Stephen Becker has been an Assistant Professor with APPM since the fall of 2014. He received a BA in mathematics and physics from Wesleyan University. Originally he planned to pursue a graduate degree in physics, but instead chose to study applied and computational mathematics at the California Institute of Technology, where he graduated in 2011. He spent time as a postdoctoral fellow with the Jacques-Louis Lions Laboratory at Paris 6 University and with the T.J. Watson Research Center at IBM Research. His research group at CU Boulder is interested in optimization and statistics for machine learning and signal processing applications by combining applied mathematics with computer science and signal processing techniques. Specifically, they research optimization, numerical linear algebra, sampling theory, mathematical applications, and physical applications. At CU, Professor Becker has taught APPM 5440: Applied Analysis 1 and APPM: 5450: Applied Analysis 2. In his free time, he enjoys spending time with his wife and two daughters in the mountains.

Q: You originally planned to pursue a graduate degree in physics. Why did you pursue applied mathematics instead?

A: I attended a liberal arts college and it was a wonderful education but the trade-off with a small school was a lack of certain fields, and there was no applied math or even engineering on campus, so I didn't know it existed. I studied math and physics, and figured those were my two options for grad school. The summer before my senior year I was doing computational physics research and came across a paper by Tadayoshi Kohno (a CU grad, and also a Fairview HS grad like myself) about using math to crack certain types of encryption. This was my first realization that computer science wasn't just about programming but actually using math in an interesting way.

That fall I studied for the physics GRE, and the day after I took it, I had free time and started looking at physics programs and realized I was not actually excited about physics research. The same day, I found the work of Andrea Bertozzi at UCLA on the spread of infectious disease (not too dissimilar from some of Prof. Dukic's work here at CU applied math), and then found more and more applied math research, and suddenly noticed that there were departments of applied math, and ended up attending one such department.

Basically, applied math had the quantitative components of physics that I liked, but with so much more freedom on where to take research. I never ended up working in either cryptography or disease modeling, but these were the type of interesting quantitative projects that made me want to become an applied mathematician.

Q: What are some of your accomplishments outside of academia?

A: My proudest accomplishment is my family, with my wife Kim and two lovely young daughters Sophie and Elena.  In my free time, I used to do quite a bit of technical mountaineering and convinced my grad school advisor to give me 3 weeks off to climb Denali in Alaska with two of my friends.  Now that I'm back in the climbing mecca of Boulder I don't actually climb as much except for occasional outings, the most recent of which were trips to Longs Peak (Alexander's Chimney this winter, and the Casual Route last summer with CU senior math instructor Bernard Gillett) and a traverse in the Indian Peaks with CS professor Jed Brown two summers ago.

Q: Why do you believe the intersection of mathematics and computer science is important?

A: My subfield of applied math is scientific computing, and our job is to use math to improve the speed and accuracy of computational algorithms.  There is a basic amount of interdisciplinary knowledge that is required (the math to design algorithms, and computer science to understand which operations are efficient on a computer), but we're seeing more and more higher level collaboration, in both research and in journals and conferences. For example, in my specialty of optimization, computer scientists have a strong background in combinatorics and discrete optimization, while mathematicians have a strong background in analysis which is used in continuous optimization. Furthermore, many applications of optimization are in machine learning, which is traditionally in the realm of computer science but also involves math and statistics. For their part, the computer scientists know a lot of math and make very mathematical contributions.

One thing I noticed from my time working at IBM Research, where most of the researchers have PhDs in computer science, was that having an applied math background meant I knew things that people with computer science backgrounds didn't necessarily know. In particular, being fluent in computational and theoretical linear algebra, and numerical analysis, went a long way. I think that for people entering the job market looking for a quantitative job, the applied math background gives them a very useful complementary skill-set to more typical job candidates.