Concept of operations for MAXWELL once in orbit. Find out more at the MAXWELL website.

Aaron Aboaf is leading a team of students on a million-dollar satellite development project to advance space communications technology — all from his childhood bedroom in Aurora, Colorado.

Working entirely via Zoom, remote desktop connections, and webcams, the University of Colorado Boulder team is trying to continue construction and programming of a satellite none of them can currently touch.

Welcome to designing a CubeSat during coronavirus.

“It's taken a while to get used to. It's remarkable how well the team has reacted to the remote setting. We could have all given up and waited until we could get back in the lab, but we're making progress,” said Aboaf, a master’s student in the Ann and H.J. Smead Department of Aerospace Engineering Sciences.

Meet MAXWELL, a CubeSat nanosatellite, roughly the size of two loaves of bread. Don't let its small size fool you; it contains highly sophisticated technology that could revolutionize space communications.

The project will be the first CubeSat platform to use CDMA technology. Widely utilized in cellular phones, CDMA is what allows multiple devices to simultaneously connect to the same cell tower.

Space satellites are typically old-school with their communications – relaying signals to a ground station that can only “talk” to one satellite at a time. MAXWELL aims to change that.

“If this works, we can have several satellites on the same band, and they can all talk at once,” said Elliott Harrod, an aerospace master’s student and systems engineer on the project.

As the number of satellites in orbit continues to grow, this becomes increasingly important, particularly with satellite constellations, an array of small satellites that work and communicate in unison.

There are also unique national security implications to such technology, which is why the MAXWELL project is being funded by the United States Air Force.

“Instead of having a couple big, expensive satellites, you could have 100 smaller, less expensive ones, which is more resilient,” Harrod said.

However, the coronavirus pandemic has forced the team to work exclusively remotely at a critical time for the project. MAXWELL was green-lighted in 2016. It has been a long road, but most of the hardware has already been chosen. The team had hoped to finish the satellite in early fall and deliver it to the Air Force for a January 2021 launch. They are still aiming to meet that deadline.

Thankfully, much of the ongoing work is debugging and software, which is more amenable to remote efforts. 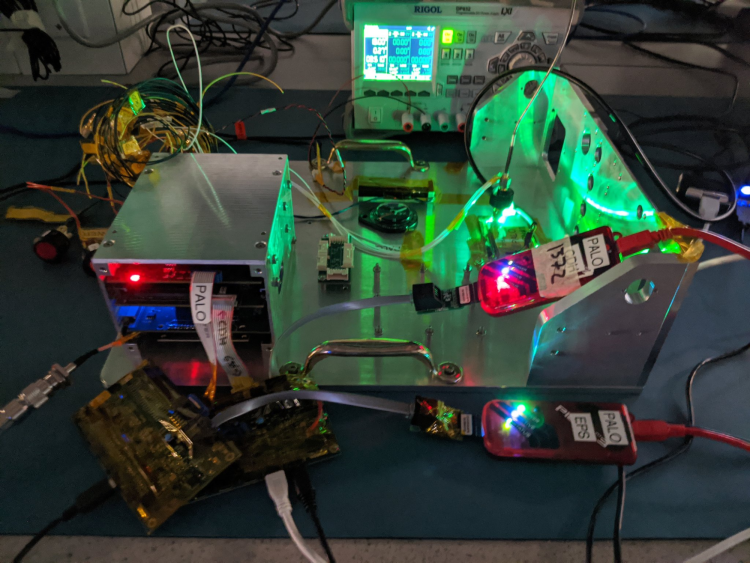 MAXWELL "flat-sat" setup in the laboratory on campus.

“We had enough warning from the university that campus was shutting down. We were lucky enough to set up and wire all of the components in the clean room in the Aerospace Building and can connect to the satellite wirelessly. The industry term is a “flat-sat,” since it's all laid out on a table, and we can remote desktop in and have a webcam on it to see the indicator lights blinking,” Aboaf said.

In addition to the unit in the clean room that will eventually launch, the team also has a separate testing “engineering unit” with most of the same components. They sent it home with Harrod and have scheduled Zoom sessions where they will walk him through soldering or other late-breaking physical changes so they can test the results for future work on the flight MAXWELL.

The engineering unit lacks certain expensive parts they cannot afford to duplicate but has most of the core functionality.

While MAXWELL is officially a graduate project, the team includes both undergraduate and graduate students. Aboaf himself started on the team as a sophomore. Matt Zola is a current junior in aerospace engineering.

“I started as a freshman without a lot of technical knowledge, but I see the work mirroring what I learn in my courses. I get knowledge, then I'm directly applying it,” Zola said.

Aboaf said they are seeking interested volunteers even now.

Since 2016, some 85 students have worked on the project, which also draws heritage components from past CU Boulder CubeSats. The university has already launched nine and has a dozen more in various states of development.

While stuck at home, Aboaf said the whole team has continued to contribute and that there is still much work that can be accomplished before they will need to resume in-person preparations on the flight unit in the lab.

“The pandemic threw a huge wrench into our gear system, but everyone around the world had things they were planning to do and things going on. There's no contingency for this – we weren't tracking global pandemic as a risk to the project,” Aboaf said. “But the hardware changes on the satellite at this point are minimal, and there's a lot of work still to do – and that we still can do.” 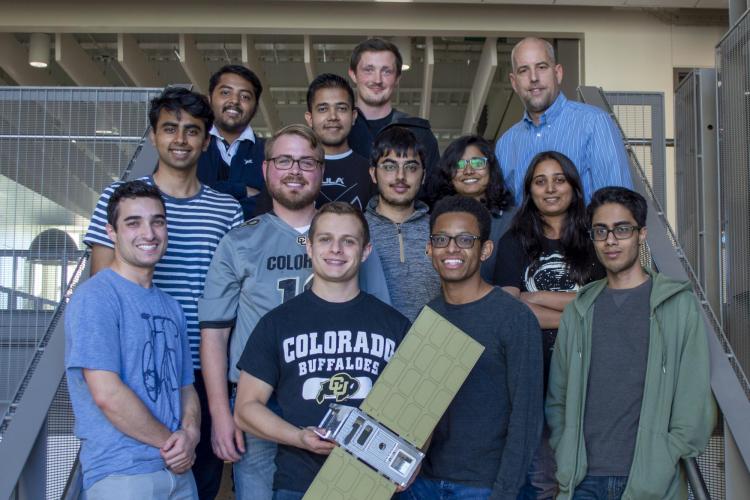 The team on campus in Fall 2019 with a satellite mockup.