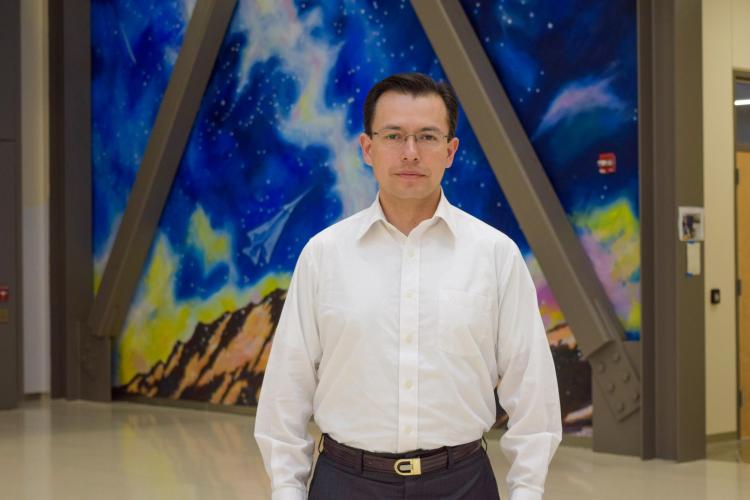 Paul Sánchez is being recognized with a rare honor: an asteroid that bears his name.

“It was quite unexpected,” said Sánchez, a senior research associate in the Colorado Center for Astrodynamics Research within the Ann and H.J. Smead Department of Aerospace Engineering Sciences at the University of Colorado Boulder.

The honor recognizes Sánchez’s contributions to the understanding of rubble pile asteroids, a class of asteroids comprised of not one large hunk of rock, but many pieces loosely held together.

Sánchez's work has provided a possible answer to a burning scientific question: what keeps these asteroids from flying apart, back into the separate pieces from which they came?

“These asteroids rotate faster than they should be able to. They're going over the speed limit gravity sets for them,” Sánchez said. “I've identified a cohesive force that could play a fundamental role. Essentially, the force that allows cooking flour to stick to your fingers also allows asteroids to rotate faster than they should. The assorted pebbles and dust in them form a very weak cement that keeps them together.”

Sánchez was nominated for the naming by a fellow CU Boulder colleague, Distinguished Professor Dan Scheeres.

“Paul has been doing a lot of innovative work on understanding rubble pile asteroids and the environments on them. He's earned this recognition,” Scheeres said.

The naming actually applies to more than just one asteroid. (20882) Paulsánchez is a binary system of two asteroids orbiting each other. The pair is located in the asteroid belt and has a combined diameter of about 4.38 km (2.72 miles).

Only about five percent of asteroids have names, and any name must be supported by its discoverer and meet criteria from the IAU.

Scheeres knows well what it takes to receive the honor; he also has an asteroid named for him, (8887) Scheeres, as does Assistant Professor Jay McMahon, (46829) McMahon.

Sánchez learned of the naming as a surprise at a recent conference, the Fifth Binary Asteroids in the Solar System Symposium, which was held in Fort Collins.

He had not planned to attend, which created a bit of a problem for Scheeres, who was tasked with convincing him to go without spilling the beans.

“Dan said I should at least attend the reception, that I would enjoy the program,” Sánchez said.

While the conference was nearby, Sánchez’s calendar was already full -- he was preparing for a research fellowship in Paris, France, that would begin just days after the conference.

“I strongly suggested he make the trip to Fort Collins,” Scheeres said. “If he was completely against it, I might have told him, but I didn’t have to, and it was great to have him there for the celebration. No matter what you have on your resume, this is something people latch onto. It's fun.”