It's a bird, it's a plane, it's an asteroid named after a CU Boulder prof 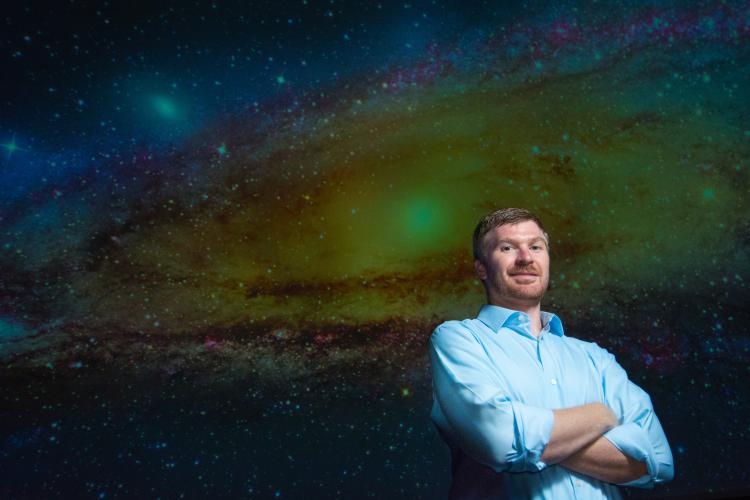 Nearly 750,000 asteroids and comets have been discovered in the solar system, but most of them are known only by a numerical designation. Jay McMahon has made a career studying these celestial bodies, and now he's being recognized with an "award" large enough to cover the entire University of Colorado Boulder campus.

The International Astronomical Union (IAU) has named an asteroid after him. Asteroid 1998 OS14 is now officially known as (46829) McMahon.

“It was a surprise to me. I had no idea it was coming," said McMahon, an assistant research professor in the Department of Aerospace Engineering Sciences.

The naming actually applies to more than just one asteroid. It represents a binary system of two asteroids orbiting each other. The pair are located in the asteroid belt and have a combined diameter of about two miles. These type of binary asteroids are a major focus of McMahon’s work and why he was nominated for the honor.

"Jay has contributed significantly to the field of binary asteroid studies. We have used his results in our work," said Petr Pravec, an astronomer at the Czech Academy of Sciences in Prague. Pravec discovered the asteroid and recommended it be named for McMahon.

Pravec’s nomination was endorsed by one of McMahon’s closest colleagues, CU Boulder Distinguished Professor Daniel Scheeres. McMahon did his doctoral research under Scheeres, and the two continue to work together. They’re currently the radio science leads on NASA’s OSIRIS-REX mission to asteroid Bennu, slated for launch in September.

Scheeres also has an asteroid named for him, (8887) Scheeres, a designation he earned in the 1990s. It is indeed a high honor – only about 5 percent of asteroids have names, and any name has to be supported by the discoverer and meet criteria from the IAU.

The naming is all the more notable as McMahon is still early in his career. He earned his doctorate at CU Boulder in 2011 and has only been on the faculty since 2013. It’s a clear recognition of his work on the dynamics of binary asteroids and their orbits.

“These asteroids are left over from the formation of our solar system,” said McMahon. “This is what was out there that evolved to make planets like Earth and Mars. We're trying to understand their evolution.”

Scheeres said McMahon’s research has been cited by scientists across the aerospace field.

"In his PhD Jay did really great numerical work and analysis and wrote predictions a lot of other astronomers used. It’s always a good sign when other astronomers are using your work," said Scheeres. “He's continued to make contributions to our understanding of asteroids and binary asteroids. It’s certainly fitting for him to be honored in this way."

Unfortunately, you won't be able to pull out your backyard telescope and scan the night sky for (46829) McMahon. While it can be spotted from Earth, you would need to visit a major observatory to find a telescope large enough to see it. The closest is the Apache Point Observatory in New Mexico, which is owned by a consortium of universities including CU Boulder.

That shouldn’t diminish the honor. Many researchers work most of their careers in relative anonymity. But as a young professor, McMahon has already joined an elite interstellar club of men and women who have their names plotted amongst the stars.