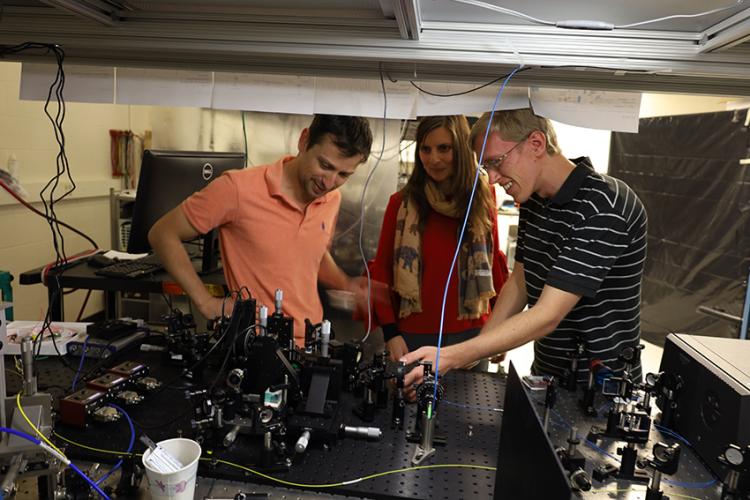 From left: Cohen, Gopinath, Krueper in the lab. Their paper, “Realistic model of entanglement-enhanced sensing in optical fibers,” was published in Optics Express earlier this year.

Research into quantum engineering may provide a number of significant advancements in sensor technology, but optical loss and signal noise have – until recently – held these applications back. In “Realistic model of entanglement-enhanced sensing in optical fibers” published in Optics Express earlier this year, the Optics and Photonics Research Group at CU Boulder and their partners predict and demonstrate meaningful advances in fiber-based, quantum-enhanced remote sensing and probing of photosensitive materials.

The group, under the leadership of Alfred and Betty T. Look Endowed Professor Juliet Gopinath of the Department of Electrical, Computer and Energy Engineering modeled the internal loss, external phase noise and inefficiency of a Mach-Zehnder interferometer, but utilized a practical fiber source that created Holland-Burnett entangled states from the two-mode squeezed vacuum. This significantly reduced the limitations of internal loss and phase noise and demonstrated the potential gains of a quantum-based approach to sensitivity.

The group found that a two-mode squeezed vacuum source provides about 25 times the amount of photon flux than comparable entangled sources and predicted that phase sensitivity may increase as much as 28% above the shot noise limit.

Greg Krueper is a graduate student in the Optics and Photonics Research Group and first author on the paper. When he was an undergraduate student, he worked on design projects for sensors. As a PhD candidate studying under Gopinath, he learned about the potential enhancements quantum physics could bring to optical sensors.

“In that moment, quantum physics became not something to just learn and work through, but to leverage and engineer to our advantage,” Krueper said. “Reading through the literature on entanglement-enhanced sensing revealed a substantial gap between seeing the physics in the lab and using those observations in a practical sensor. We wanted to explore what exactly it would take to create such a sensor, and how difficult that would be.”

While the effects of phase noise and optical losses in classical and quantum versions of the sensor were previously modeled, the Gopinath group’s work was unique in that it integrated them into a single model.

“Our findings highlight some subtle points on making a practical sensor using the general technique of entangled photon interferometry,” Krueper said. “We also drew attention to the open and largely unexplored idea of using these sensing methods with optical fiber sensors, which would greatly expand the range of applications for the technique.”

Assistant Research Professor Lior Cohen gave Krueper unique credit for designing and programming the model, calculating the results, and working on the paper. Cohen served in an advisory role on the project.

“I was inspired by quantum mechanics’ counterintuitive results,” Cohen said, citing a desire to tackle these experiments. “To continue this work, we have plans to develop quantum-enhanced, long-distance temperature sensors in fibers.”

The research was performed in collaboration with co-authors Stephen Libby and Charles Yu at Lawrence Livermore National Laboratory and Robert Mellors at the University of California, San Diego.

The CU Boulder College of Engineering and Applied Science is committed to quantum research through its Quantum Engineering Initiative, which aims to build and expand research efforts in the field — especially in quantum sensing, which is a unique strength of the college — while developing and strengthening ties with local and regional partners. The Quantum Engineering Initiative recently opened a new interdisciplinary lab space dedicated to this effort. 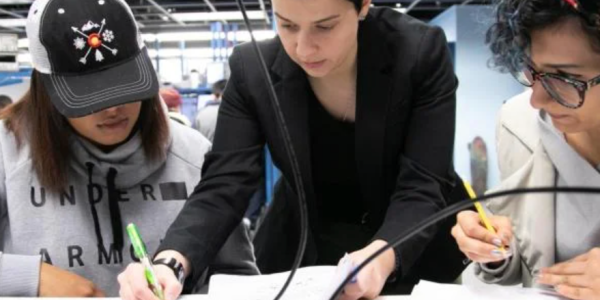 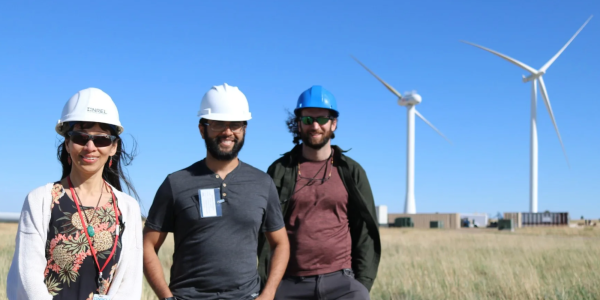 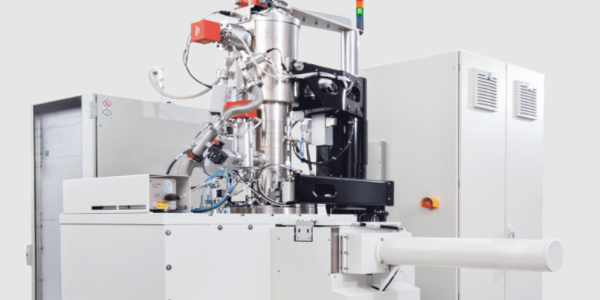