Lucky Vidmar (CompSci'94; M'97) is working to empower ethics-focused engineers through the Moulakis Lecture Series on Responsible Engineering in the Herbst Program for Engineering, Ethics & Society.

Vidmar left Croatia and came to CU Boulder in 1990, on the eve of war in his home country. Today he is the head of intellectual property litigation for Microsoft.

Throughout his journey, Vidmar said learning how to think critically about the information he was taking in was as essential as the “nuts and bolts” of code and mathematics.

“It's more important than it's ever been that engineers should be more well-rounded. There's so much power in the tools that engineers make. And with that power comes a lot of responsibility,” Vidmar said.

That is why he wants CU Engineering students to be known as graduates who enter the workforce ready to think about responsibility and ethics, rather than being forced to confront them for the first time in industry.

“That ability is a great differentiator,” he said.

As a young man, Vidmar became more well-rounded by seeking the answers to some of life’s biggest questions in the Herbst Program.

The Herbst Program, founded by donors Clancy and Linda (Vitti) Herbst, uses group conversations about great works of philosophy and literature to address the complexities of the human condition. Herbst seminars help students hone critical thinking and communication skills in the overlap between engineering, ethics and society.

Vidmar signed up for a Herbst seminar course as a break from engineering, but then, he said, “it became more enmeshed in my engineering self than I had realized. At the time I thought it was two different sides of me, but I realized later that it was actually one and the same.”

In those early days, Vidmar found connection to the founder of the Herbst Program, Professor Athanasios "Thanasi" Moulakis.

As Teaching Professor Leland Giovannelli, one of the Herbst faculty from those early days remembers,

"Lucky was charming and personable, with a razor-sharp wit — just like Thanasi. They understood each other: they were both polyglot Europeans with a thorough grounding in Old World culture.

This was obvious when Thanasi and I gave our junior-level Herbst students a brief introduction to European opera. After some explanatory remarks, we played selections from the heroine’s arias in Cherubini’s opera Medea.

Most students, strangers to this art form, wondered about the process: 'How can she project her voice like that? How can she sing without getting tired? Why can’t she use amplification?'

Lucky asked a very different kind of question: 'That sounds like early Maria Callas; is it?' He was right, of course. Thanasi beamed."

Vidmar said that, after college, it was the critical thinking skills he had developed, in tandem with his high level of technical expertise, that brought him success as an intellectual property lawyer.

“As a junior lawyer, I was talking to engineers, trying to understand what we were protecting, looking at source code and translating that for lawyers, judges and juries who didn't always have that knowledge,” Vidmar said.

Now, in a management role, Vidmar said his focus has shifted from particular cases to the larger picture of intellectual property.

“It feels good to play a small role in developing the future of intellectual property—not just for mega companies like Microsoft but creating a system that's fair and workable and energetic for everyone. I believe, and lots of us at Microsoft believe, that if everybody's better off, we will also be better off. It’s pretty simple,” Vidmar said.

Vidmar said he wants to help engineering students start thinking about the big picture sooner.  That is why he and his wife Aubrey Ardema are supporting the creation of the Moulakis Lecture Series within the Herbst Program to help CU engineering students approach their chosen profession in a responsible and ethical way.

The Moulakis Lecture Series seeks to honor Vidmar's friend and mentor—who was also his teacher in four separate Herbst courses. Moulakis overcame fierce opposition to engineers reading classical literature, and led the Herbst Program for 11 years. Later, Moulakis championed the same cause in other institutions, languages and countries before his untimely passing in 2015.

Giovannelli said she believes the series is a fitting tribute to this inspiring educator whose words still have relevance 33 years later,

"It is important… to ask ourselves if education is doing what it ought to do, if only because the ingenious technological processes and products of modern science… also threaten to destroy our world.

Fear of nuclear and ecological catastrophe naturally focuses the mind on the necessary limits of human endeavor. But quite apart from that, no education focused on mere survival or devoted to some blind process of growth would be worthy of the name.”

- "Beyond utility: liberal education for a technological age" by Athanasios Moulakis (page 1) 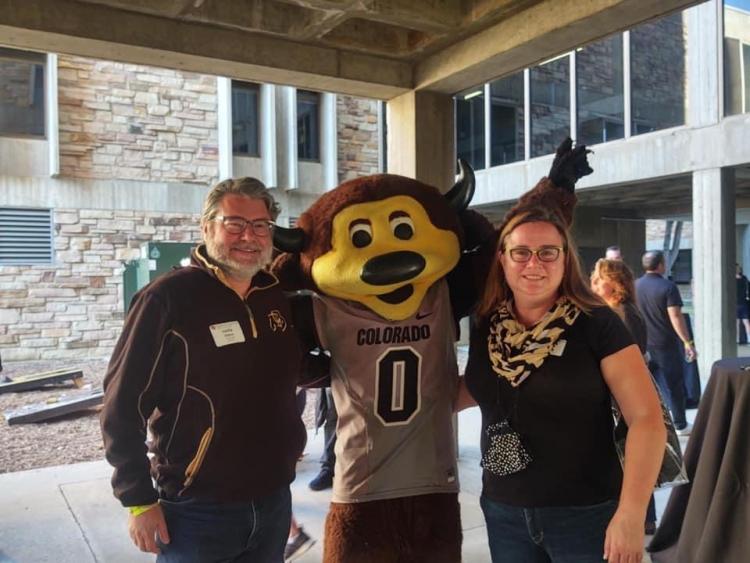 Lucky Vidmar and his wife Aubrey Ardema with Chip the Buffalo