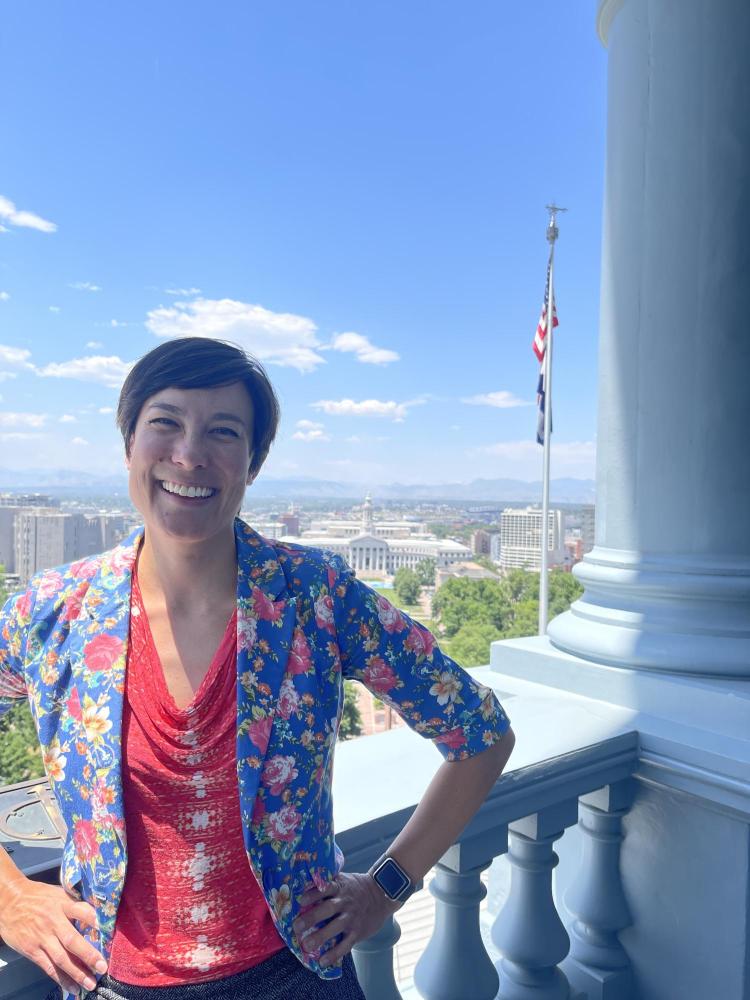 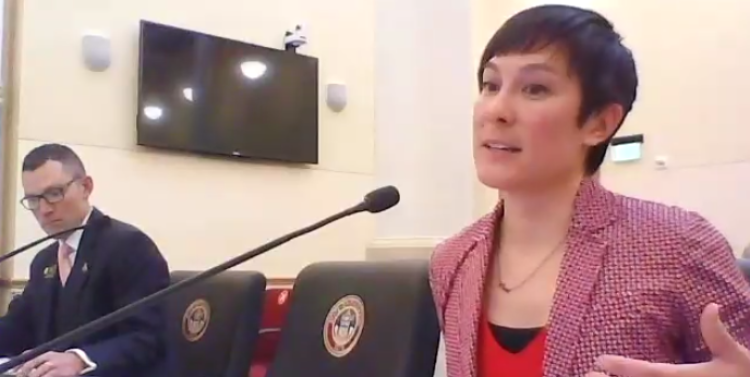 Above: Christine Chang poses for a picture at the top of the Colorado State Capitol. Below: Chang giving her testimony on proposed legislation that deals with artificial intelligence, facial recognition technology and related privacy issues.

Computer science PhD student Christine Chang was recently invited to testify before the Colorado Senate Committee on Business, Labor, and Technology on SB22-113 – a piece of proposed legislation that deals with artificial intelligence, facial recognition technology and related privacy issues.

Chang said the opportunity came through the Colorado Science and Engineering Policy Fellowship she completed last summer. That program is hosted by two Colorado state senators who are themselves engineers and recognize that kind of perspective is valuable in the legislative process – especially in developing policy spaces like artificial intelligence, Chang said.

“Testifying was nerve-wracking, but I was excited to go on record and to answer questions,” she said. “Most people are not quite sure what facial recognition technology is or how it works in these situations. Which is totally normal and expected at this point. I tried to answer those kinds of questions for the legislators in my testimony. And it honestly gave me more faith in the system because you could tell they wanted to learn and to do the right thing.”

The bill is sponsored by state Sens. Chris Hansen (D-Arapahoe) and Janet Buckner (D-Arapahoe) and seeks to create a task force to study artificial intelligence, while also restricting the use of facial recognition services by state and local government agencies and temporarily prohibiting the use of facial recognition services by public schools. Chang said she personally supports the legislation, noting that the landscape of AI-based technology is constantly changing and that we need to do a better job to protect the residents of Colorado – particularly our most vulnerable groups.

“The task force element is really key to me because we need experts who can more or less evaluate these questions in real time – if only because of how fast things are moving right now. And studies show that people tend to over trust technology, and that is one of the primary reasons I support the bill,” she said. “We need policy that both protects our residents in the state while also allowing for this technology to continue to be developed.”

Chang works in the Collaborative AI and Robotics Lab under Assistant Professor Bradley Hayes. Her research there as a Draper Scholar also touches on topics like human-robot teaming in the workplace. Before pursuing her PhD, she worked for Boeing and Johnson Space Center and earned degrees in mechanical engineering and STEM education. She also taught at a pre-K through ninth-grade school and held a job with Boise State University’s Institute for STEM and Diversity Initiatives.

She said all of those positions and perspectives informed her choice to explore policymaking now and as a career path after graduation.

“Each step I have taken along the way, I have made a wider and wider impact. To me, affecting policy is the biggest positive impact you can arguably have,” she said. “Working on the policy idea this summer and then following up by testifying on it is a way I can use my engineering skills, experience as educator, and research together in a really exciting and impactful way.

“It was a really fun experience and I think more people should consider going to testify on things they think are important and they know about,” she added.

SB22-113 was first introduced on Feb. 3 and is now under consideration in the Colorado House of Representatives. The bill’s full text can be read on the General Assembly website.