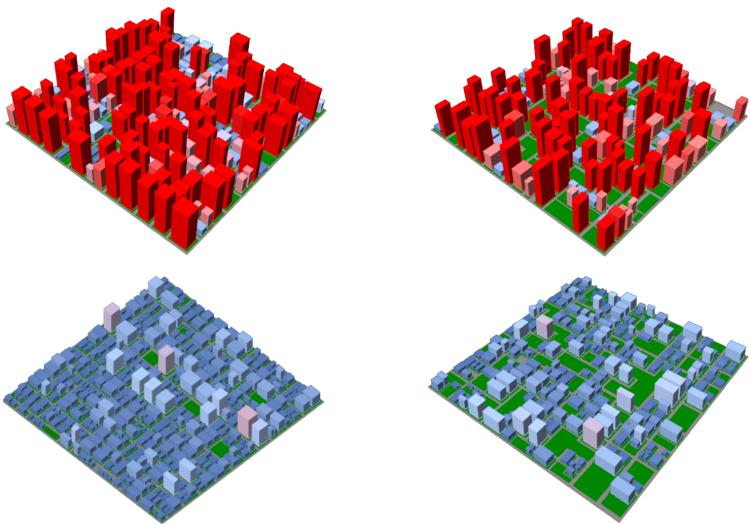 Graphic from the paper showing different urban environments varying in height and density.

Researchers at CU Boulder are part of a newly published study that finds that low-rise, high-density environments like those found in Paris are the optimal urban form when looking to reduce greenhouse gas emissions over their whole life cycle.

The work, recently published in npj Urban Sustainability, builds on a growing debate around the design of future urban environments and was done in partnership with Edinburgh Napier University. The built environment is a big contributor to carbon emissions, global energy demand, resource consumption and waste generation. In the U.S., it accounts for 39% of all greenhouse gases emissions, while in the European Union, it accounts for 50% of all extracted materials and 42% of the final energy consumption – making it a rich area for understanding and improvement related to climate change.

Jay Arehart, an author on the paper and instructor in the Department of Civil, Environmental and Architectural Engineering, said the work challenges current conventional understanding that tomorrow’s cities must be densely packed and stretch upwards to address and curb greenhouse gas emissions. The idea being that tall buildings make optimal use of space, reduce operational energy use for heating and cooling and enable more people to be accommodated per square meter of land.

“Both the urban sprawl that we see in the suburbs of the United States and the high-rise that we see in places like New York City are not necessarily optimal,” Arehart said. “We showed that new development should focus on minimizing whole-life carbon of buildings, not just the emissions from their operations or their materials. That density is needed for a growing urban population, but height isn't.”

The team investigated four different urban typologies – from dense-and-tall to sparse-and-low – by simulating 5,000 environments based on real-world data to establish their lifecycle greenhouse gas emissions. This approach considered both premium for land (the extra land needed to build low-rise compared to high-rise) and premium for height (the extra materials to build high-rise compared to low-rise) to make comparisons fair said Francesco Pomponi, the lead author on the paper and professor at Edinburgh Napier University.

"We developed a novel urban density metric to measure things up as accurately as possible," Pomponi said. "Our results show that density is indeed needed for a growing urban population, but height isn't. So it seems the world needs more Parises and fewer Manhattans – as much as I love New York – in the next decades."

Urban Sustainability is the newest addition to the Nature Partner Journals series.