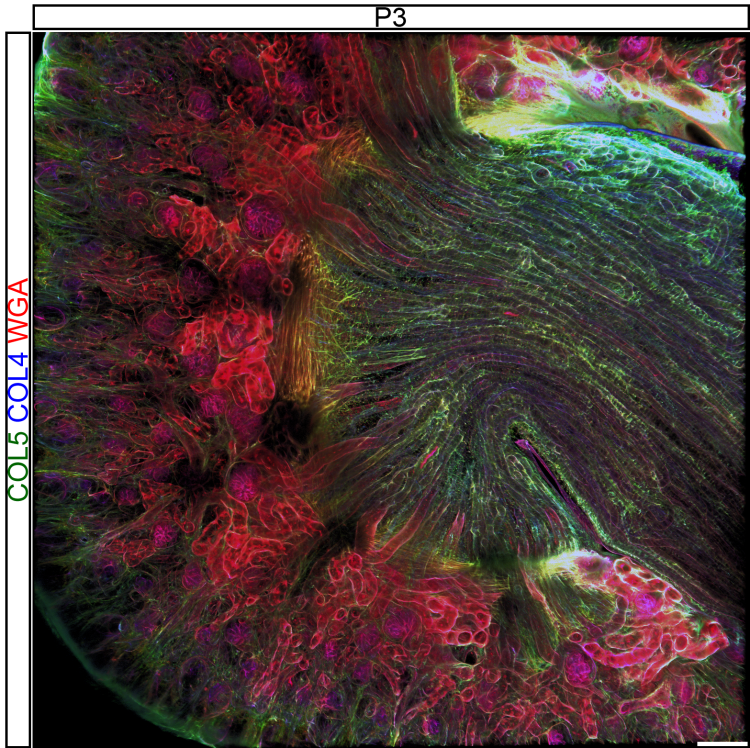 A new lab at CU Boulder is exploring how the extracellular matrix – a network of proteins that surrounds cells and provides structural and mechanical cues in the body – specifically impacts kidney growth, development and function.

Their work, recently described in the Journal of the American Society of Nephrology, addresses several unknowns when it comes to the matrix, tissue engineering and the kidney.

The kidney removes waste and salt from the body and restores water balance. It also plays a part in hormone production, said PhD student Sarah Lipp, the first author on the paper.

“The extracellular matrix is critical for kidney formation and normal kidney function,” she said. “Yet how the matrix composition and structure change as the kidney develops was previously unknown. To address that in the publication, we looked at both those aspects as the kidney initially forms and matures using a mouse as a proxy for human development.”

Lipp is part of the Musculoskeletal Extracellular Matrix Lab under the direction of Associate Professor Sarah Calve. That team recently moved to the Paul M. Rady Department of Mechanical Engineering from Purdue University, where Lipp is still finishing her degree. While the work was started at Purdue, it was completed after the lab’s transition to CU Boulder.

The research is part of ongoing efforts in tissue engineering, which combines cells, matrix and growth factors to replicate organ function. Doing so effectively would potentially reshape regenerative medicine and, in this case, increase the available kidney transplant pool by creating a synthetic option instead of donated organs.

Calve said her lab will continue this line of research at CU Boulder. The structure and composition described in the paper can be used as an initial guideline for tissue engineers studying the kidney.

“Our lab is primarily focused on understanding the extracellular matrix composition, structure and mechanics of the developing musculoskeletal system, so branching into the kidney has been a welcome challenge,” she said. “There is still plenty to explore and work on in this area as we observed interesting trends in the interstitial extracellular matrix, a fibrous network in between cells, and are now investigating what happens in a model of abnormal kidney development during the embryonic stage.”

“3D Mapping Reveals a Complex and Transient Interstitial Matrix During Murine Kidney Development” was supported by the National Institutes of Health DP2 AT009833 to Dr. Calve. Sarah Lipp was supported in part by the National Institutes of Health, National Center for Advancing Translational Sciences, Clinical and Translational Sciences Award UL1TR002529 and TL1TR002531.