It has to work: Sub T Challenge sharpens students’ skill in the field 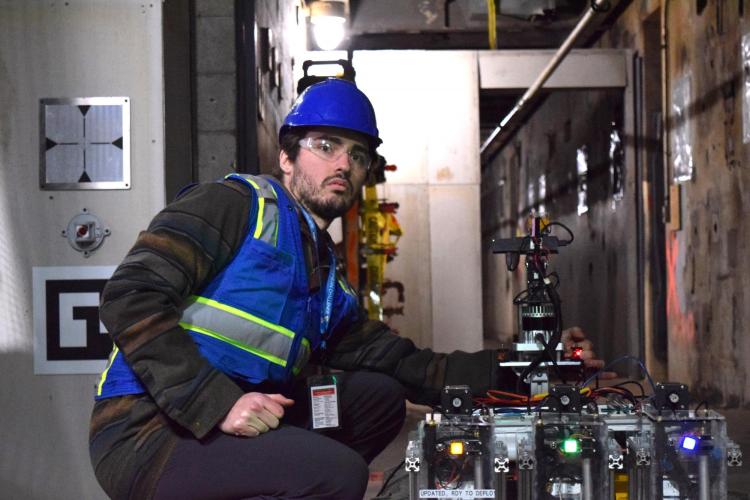 Editor's note: CU Boulder is one of several funded teams in the Subterranean Challenge, a competition launched by DARPA to stimulate and test ideas around autonomous robot use in difficult underground environments. CU’s team is a $4.5 million collaboration led by the College of Engineering and Applied Science through the Autonomous Systems Interdisciplinary Research Theme.

They are the most visible but quietest part of the inactive nuclear power facility, which is now typically used for training and office space. Today, however, the unused and abandoned nuclear reactor areas underground are full of activity. Here, teams from across the U.S. and the globe are in the middle of a multi-day competition at the park to demonstrate how autonomous drones could be used in hazardous search and rescue operations. CU Boulder’s Team MARBLE is one of them and just finished a one-hour deployment into the bowels of the gigantic building.

Support members that stayed above ground, cut off from the activities of the team and results, huddle around PhD candidate Michael Ohradzansky as he reports on the attempt. One of the vehicles lost localization – its ability to tell where it is on the course. Another left and never came back, he says. The last tracked vehicle, well, they don’t really know what happened there. Or with the aerial drone, which had its own problems.

That poor news is tempered by the team’s ability to deploy all of their equipment quickly in the hourlong run: a key metric for success in future runs and an encouraging aspect of the day’s activity.

Taking it all in, Computer Science Assistant Professor Chris Heckman simply nods, affirming how difficult the problem is on so many levels.

“Let’s lick our wounds and try it again tomorrow,” he said.

Tomorrow is a new day 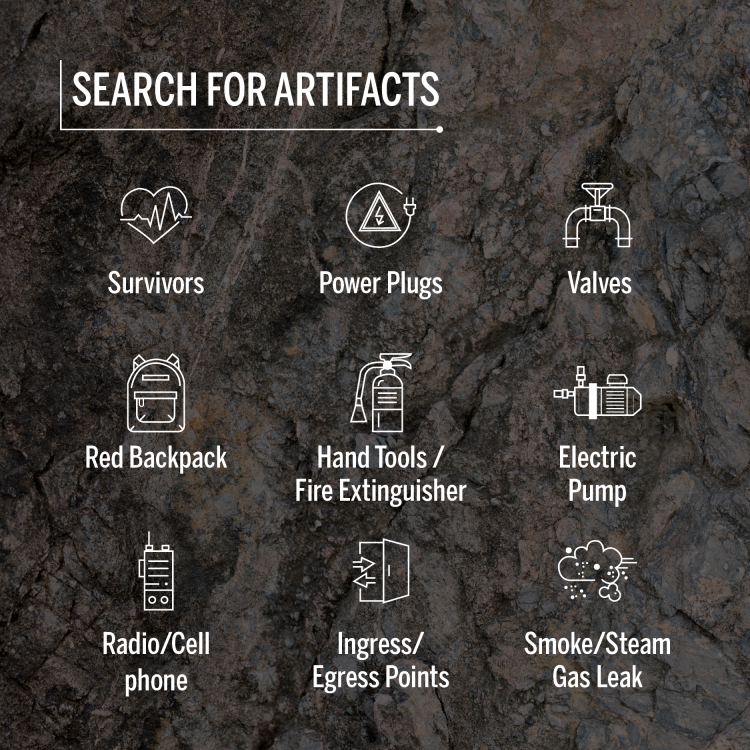 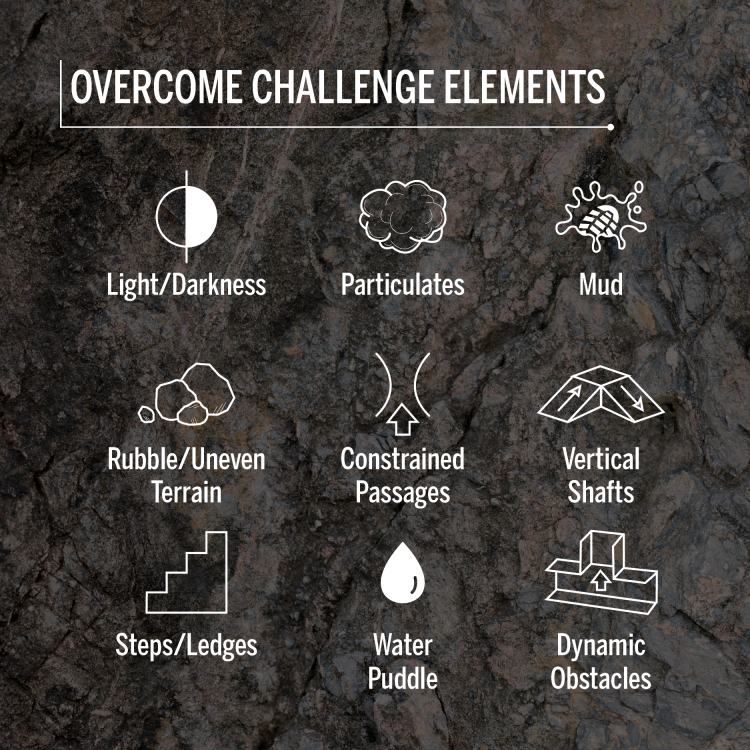 If the team was designing an ideal space to lick their wounds, their immense rental would likely hit every request. The three-car garage offers natural light, which floods on to the neatly arrayed drones hooked to laptops for diagnostics. Open space and Wi-Fi access abound.

Ohradzansky, finishing up a game of pool in the living room before wading into the data, reflects on the problems from yesterday’s deployment.

“After a run, we are usually mentally, physically and emotionally wiped. It’s stressful and draining because things pop up that you didn’t even know you had to consider,” he said. “So we try to relax before pulling the data and seeing what happened. From there on, though, we are using every second to tweak and adjust our robots and plan for the next run.”

CU Boulder is one of several funded teams in the Subterranean Challenge, a competition launched by the U.S. Defense Advanced Research Projects Agency to stimulate and test ideas around autonomous robot use in difficult underground environments. It’s a high stakes competition with prestige, bragging rights and prize money all up for grabs to the winning team. CU’s team is a $4.5 million collaboration led by the College of Engineering and Applied Science through the Autonomous Systems Interdisciplinary Research Theme. It is dubbed Multi-agent Autonomy with Radar-Based Localization for Exploration (MARBLE) and also includes engineers from CU Denver and the Massachusetts-based Scientific Systems Company, Inc.

This series of challenges at the business park in Washington are the second leg of the competition. The first was held in a tunnel in Pennsylvania last year, testing capabilities in long, repetitive and constrained environments. This leg tests capabilities in urban environments, while another round will be held in a natural cave this summer.

The complex underground settings found in all three represent significant and likely challenges for military and civilian first responders in the case of an emergency. That includes environmental factors like difficulty communicating through walls or the potential for unseen dangers like unknown spilled hazardous material deep inside the rescue area. An autonomous drone – or a team of drones, as MARBLE is using – could provide answers to those issues by searching quickly, independently and without fear of personal harm.

The business park’s unfinished reactors present a great testing area, especially for unseen hazards. It is dark, large, complex and absolutely littered with debris. It's common to see cables dangling from the ceiling or pipes sticking out from the wall that could tangle man or machine, and you could easily envision a toxic pool of something on the floor.

In a typical hour run, autonomous robots enter the course, scanning for “artifacts” – cell phones, hazards or dummies representing survivors – placed deep in the course. They then report back their location with only a narrow margin for error. Because the conditions limit the use of GPS, the MARBLE team is using a traditional camera, radar and a laser-based system called Light Detection and Ranging (LIDAR) to build a virtual map of the area. That map is then shared to a human controller and other robots entering the course to help decide which areas to explore again for missed artifacts or which newly discovered zones to prioritize for search.

Problems in the initial run for CU’s team stemmed from the creation and sharing of that map. For some reason, the first robot entering the course got confused on its version of the map, creating blind spots for the following robots, explained Ohradzansky. Now the team will comb the onboard video from the robots to see what actually happened and if there were artifacts that were missed altogether.

“We eventually got him (the first robot) to clear his map and get exploring, and he got pretty deep. Then he started to go over some terrain that he should have steered away from … and so he eventually got stuck on a pillar,” Ohradzansky said. “Today we are diagnosing that. It sucks to see something after the fact you didn’t plan for, but you have to move on the best you can.”

Identifying and understanding the problems is a collaborative and time-intensive process. Ohradzansky said one of the hardest and most satisfying parts of the project was that interdisciplinary work.

“I am working on the lower-level control of the vehicle, and I interface with the guys who do planning. We also have people who are working on perception, mapping, artifact detection – all of these pieces have their own system requirements, both physical and in code. Trying to prioritize one system over another is difficult,” he said. “We try not to let things get too heated, because at the end of the day we are all working toward the same goal. Everyone comes from a different background and has their own perspective, which is exciting and leads to lots of unique solutions.”

Fellow PhD candidate Michael Miles said the challenge was a unique opportunity to test skills in tough conditions. The tight deadlines – six months to build, test and deploy – coupled with the high stress of competition have been hard but valuable teachers, he said.

“Normally, you are making a robot that just has to work enough for a three-minute video,” he said. Then you publish a paper and visit a conference, and you are done. Repairs or changes can be made as there is time.

“But running these complicated systems for over an hour in tough conditions? That is unlike robotics anywhere, and it keeps you humble,” Miles said. “When you are under the clock and things aren’t going as planned, you can feel your heart in your chest. You want to stress about it, but instead you find a fix or a patch and get that robot through the gate and exploring.”

DARPA streams all of the runs through the obstacle courses, both online and on screens in the middle of the team waiting area.

If you ask members of CU Boulder’s team, they will tell you that watching how others are approaching obstacles and designing their platforms is both daunting and inspiring. Because this is an ongoing competition with future testing set for August 2020 and August 2021, the video feeds provide a rich venue for feedback and idea sharing amongst competitors, many of whom are the best in the field.

Sean Humbert, a professor in the Paul M. Rady Department of Mechanical Engineering, leads the CU Boulder team and said he is proud of how well they are doing, given the level of competition.

“This is good company to be in,” he said. “The top teams are well-funded and have 30 or more professional engineers, researchers and students, where the core of our team is 10 to 15 graduate students. So our ability to rise to the occasion and compete is something we are truly proud of.”

The location for the upcoming August 2020 competition hasn’t been announced yet, but it will be in a cave environment. Heckman said natural cave networks often have irregular geological structures with constrained passages and large caverns. That means a whole new set of obstacles and perception challenges that build on what the team learned in Washington.

“The challenges that our students are facing are thrilling and push the boundaries of computer science and other disciplines,” Heckman said. “Fifty years ago when our department was first formed, it would have been crazy to think that computer scientists would be working side-by-side with engineers, applying techniques they were developing to robotic autonomy. Now, all of our work is interdisciplinary, and I think we’re developing students who will be well-positioned for where our field goes over the next 50 years.” 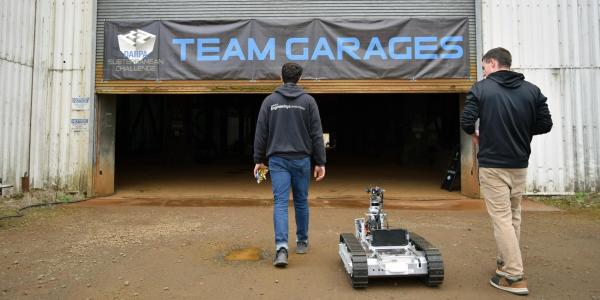 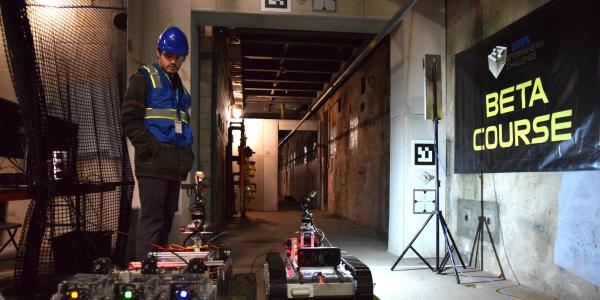