Banner image: A quadcopter drone flies into an entrance of Edgar mine, an experimental facility at the Colorado School of Mines. (Credit: CU Boulder College of Engineering and Applied Science)

Read the latest about this project

Roughly one story belowground, in an undisclosed location in Boulder County, close to a dozen engineers hustle up and down a series of utility tunnels—a network of corridors filled with pipes and lit only by sporadic lightbulbs.

The students and faculty members have come to this dim and dusty environment this morning to do something they can’t do aboveground: test out a fleet of autonomous vehicles, or drones. These robots, which are called “Huskies,” are several feet tall and look like what you might get if you crossed a radio-controlled car with a Humvee.

That’s because these engineers are contestants in the Subterranean Challenge, a high-stakes competition launched by the U.S. Defense Advanced Research Projects Agency (DARPA). Over three years, teams of researchers from across the world will vie against each other to push their robotics knowledge to the limits—designing vehicles that can navigate underground environments just like this one.

Humbert hopes that the technology developed by his research group will one day lead to rolling or flying drones that can scour caves or collapsed subway tunnels around the world—and find the human survivors trapped inside.

But first, he and his colleagues will need to pass three grueling tests and a final event designed by DARPA.

They’ve already completed one test, a search-and-rescue operation that took place in an old coal mine in Pennsylvania. Their next trial takes place later this month and will bring the group to an abandoned research facility near Olympia, Washington.

“It was really impressive to see all of our outstanding students troubleshoot and solve problems real-time in the field,” Humbert said. “There will certainly be some ground-breaking science and engineering products that come out of this program, but I think the lasting contribution will be the next generation of field roboticists.”

Some of those field roboticists are gathering now in the utility tunnels.

The CU Boulder team has set up an operations center of sorts in one corner of this area, complete with a folding table and several computer monitors.

“We’ve become pretty used to sitting in the dust,” said Michael Ohradzansky, a graduate student in the Department of Computer Science. 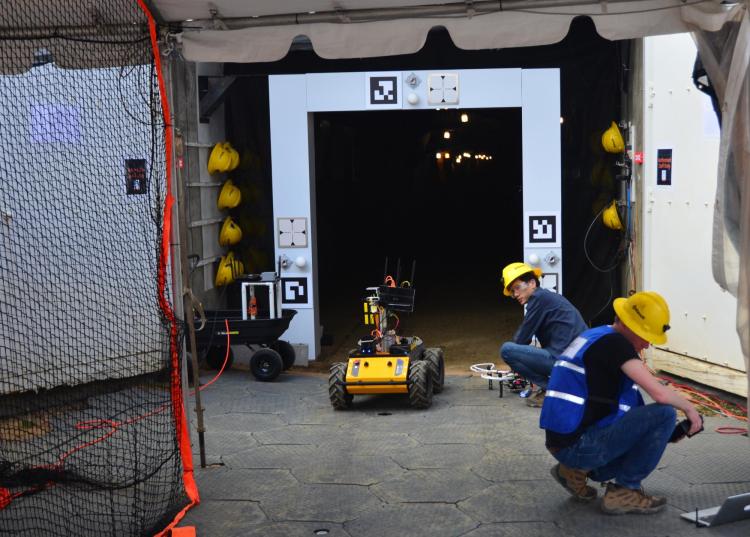 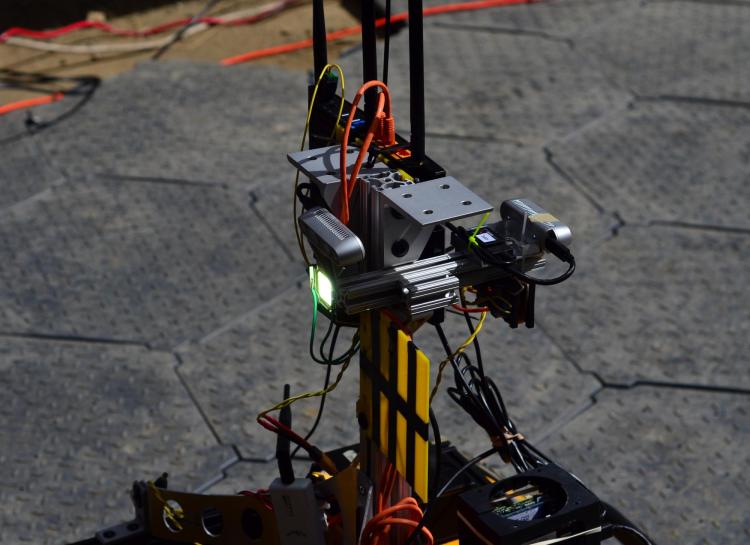 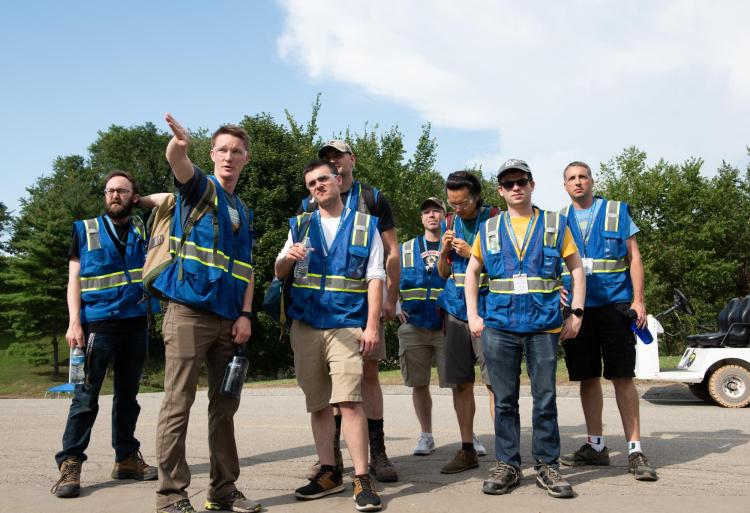 Top: MARBLE team members ready a Husky robotic vehicle to enter Edgar mine; middle: The LIDAR system mounted on top of this Husky allows the robot to navigate underground; bottom: Michael Ohradzansky (pointing) and team members look on at the challenge arena during a search-and-rescue event in Pennsylvania (Credits: CU Boulder College of Engineering and Applied Science, top and middle; DARPA, bottom)

He and his teammates type a series of commands into a computer, and a nearby Husky revs to life. It begins to roll down the connecting corridor, dodging the pipes that stick out at all angles. Soon, the robot disappears around a bend, leaving the space behind it dark.

“All this is testing autonomy,” said Christoffer Heckman, an assistant professor in computer science and a MARBLE team member.

Once the researchers press go, their robotic vehicles must be able to work together to perform their searches—all without the aid of a human operator.

That’s where things get tricky.

“Underground environments are very harsh,” Heckman said. “They don’t have very good lighting. They can be filled with gas and smoke. They can be very muddy or wet.”

Autonomous vehicles, in other words, face a different set of challenges deep underground than they would in a lab or even on city streets.

Take vision: To see in such environments, Heckman and his colleagues are designing robots that view their surroundings using three different types of sensors. They include a traditional camera, radar and a laser-based system called Light Detection and Ranging (LIDAR).

Mapping is a big problem, too. The team’s drones, Heckman explained, won’t have access to GPS in the subterranean realm. That means they’ll have to enter a completely new environment, sketch out its twists and turns and even trade maps with other robots all on their own.

“When we go into a building, humans automatically develop a 3D map in their heads,” Heckman said. “That can tell you where stairs are, where elevator shafts are. Those are the kinds of features we want our autonomous vehicles to take away from an area.”

When the group traveled to the Pennsylvanian mine in August 2019, they faced an obstacle course of sorts.

Just before the event, DARPA hid a series of objects throughout that arena—life-sized dummies, red backpacks and cell phones. To score points, the MARBLE team released a fleet of Huskies into the mine, allowing the drones to seek out and pinpoint the location of those Easter eggs.

“Once we see an object, we can back-calculate its position relative to the starting gate,” said Michael Miles, a graduate student in computer science.

The group just missed out on placing in the top three finishers, Miles said, when one of their Huskies got stuck in about a foot of mud.

But he and his colleagues are raring to go for their next chance, which will kick off Feb. 18 in Washington State. The third challenge is slated for August 2020 and the final test a year after that.

This month, the researchers’ robots will have to explore several floors instead of one, forcing them to climb up stairs and scan lofty atria for lost dummies.

To enable them to do that, Miles and his team members have converted several of their Huskies into “aircraft carriers.” These robots will haul flying quadcopters deep into the competition arena, then launch those drones to explore where rolling vehicles can’t.

“I’m feeling pretty good about this challenge,” Miles said. “We’ll be working 70-hour weeks in the lead-up, but I think we learned a lot from last time.”

Fellow graduate student Ohradzansky added that the long days are worth it. He said that the  project has given him and his team members a chance to do something that few university robotics researchers ever get to do—test their creations in the real, and very messy, world.

“Many researchers tend to stay in the realm of simulations, and everything works perfect in simulations,” he said. “What’s really different about this is we actually go out into the field, and that’s where you get a whole new level of challenge.”

The Living Materials Laboratory is scaling up the manufacture of carbon-neutral cement as well as cement products, which can slowly pull carbon dioxide out of the atmosphere and store it. END_OF_DOCUMENT_TOKEN_TO_BE_REPLACED

Qubits, the basic building blocks of quantum computers, are as fragile as snowflakes. Now, researchers have come up with a new way of reading out the information from certain kinds of qubits with a light touch, potentially paving the way for a quantum internet. END_OF_DOCUMENT_TOKEN_TO_BE_REPLACED

New results from real-world tests of a downwind turbine could inform and improve the wind energy industry in a world with intensifying hurricanes and a greater demand for renewable energy. END_OF_DOCUMENT_TOKEN_TO_BE_REPLACED
Return to the top of the page